Twenty two years after leaving the Southwest Conference for the SEC, Arkansas still doesn’t have a true conference rival. On paper, it should have been LSU, a perennial conference title contender (like Texas) bordering Arkansas (like Texas) that like Texas once prevented Arkansas from winning a national championship.

Plus, the annual LSU-Arkansas series has had perks Texas-Arkansas never did: a regular spot on national TV during Thanksgiving weekend, the Bellagio of college football trophies in the 200-pound Golden Boot and no in-state rival like Texas A&M to stir Texas fans’ deepest passions (well, no Aggies for a while, anyway).

On top of all that, LSU-Arkansas has recently produced games every bit as competitive and entertaining to watch as the great Hog-Longhorn showdowns of the 1960s. And it’s likely this Saturday’s game in Fayetteville, for which Arkansas is a 1 point favorite according to SportsBettingAcumen.com sites, produces yet another thriller.

“It’s a rivalry game,” Arkansas coach Bret Bielema told me in an interview for SB Nation. “The boot represents more than just a victory. It’s a battle between two states, something our fans take a lot of pride in. Obviously with LSU being the last game of the year there’s been a built-up rivalry here that we will hope to continue.”

Bielema lauds the rivalry aspect of the game in public, just as previous Arkansas and LSU coaches and players have. It’s no secret, though, that the enmity true rivals have for each other has been lacking here.

Take it from Matt Jones, the former Razorback quarterback responsible for the “Miracle on Markham,” possibly the series’ most memorable moment – a 31-yard Hail Mary pass to DeCori Birmingham with nine seconds left in the 2002 game that sent Arkansas to the SEC Championship game. The year before, Jones was on the opposite side as Arkansas lost a 41-38 contest sending the Tigers to Atlanta. “You knew it was a big game for whatever reason but there never ever seemed like there was a connection between Arkansas and LSU,” he says. “It was almost like it was a little bit forced on you.”

Jones says many of his teammates felt the same, as did LSU foes like running back LaBrandon Toefield. After college, Jones and Toefield were NFL teammates in Jacksonville, Fla. “We always joked” about how the series was played up, Jones says. Many LSU players “didn’t see it as a rivalry at all,” he recalls Toefield saying. “It was something the media put out.”

Carter Bryant, an Arkansas native and LSU grad, is part of the media. Now a radio host in El Dorado, Ark., he’s covered Tiger football for four years and doesn’t understand why the rivalry hasn’t caught on more. “It means a good deal to people in south Arkansas and north Louisiana because of proximity,” he says.

“But to the people of south Louisiana, it means little compared to other rivalries with trophies. LSU has pushed the Ole Miss rivalry over the years with the Magnolia Bowl trophy. Alabama with [Nick] Saban history has created a fascinating narrative plus instant classics. Every other team in the SEC West outside of Mississippi State is probably viewed as more heavily anticipated and vitriolic matchup in the minds of LSU fans.” That includes Texas A&M, which has supplanted Arkansas as the Tigers’ season finale. Not coincidentally, annual primetime showdowns with Texas A&M will help generate more profit for the SEC most years than an Arkansas matchup would.

For now, Arkansas fans are as likely to hate Alabama, or Ole Miss, as LSU. Or even an SEC East program.  “The team that I hated the most was Tennessee,” Jones recalls. Jones, who grew up in Van Buren, points to one experience as the reason. He recalls as a nine-year-old hunting with his father and walking onto a cabin in the woods. Inside, people were watched TV and cheered. On the screen, the unranked Razorbacks were pushing the No. 4 Volunteers to the wire on the road. He’ll never forget the euphoria that followed watching Arkansas kicker Todd Wright’s 41-yard field goal sail through the uprights with two seconds left to give Arkansas its first victory in Knoxville, Tenn.

Tennessee, though, already had Alabama and Florida as nemeses. Another SEC border state, Mississippi, had two in-state rivals. “Everybody kind of had a rival but us, so we had to manufacture one,” former Arkansas coach Houston Nutt says.

Enter David Bazzel, an entrepreneur who has found a niche promoting Arkansas college athletics. Bazzel loves gold, and he loves football, and from all that love sprung the idea for this: 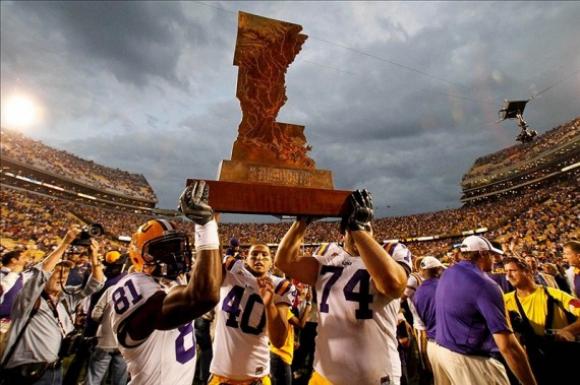 Bazzel’s Golden Boot trophy, which depicts the two states’ outlines, debuted in 1996. He hoped its record-setting 4-foot plus height would help the game attract national attention and produce better competition. “It’s about playing for something, whether it be a paper clip, a rubber band or empty Coke can,” he says. In this case, “it just so happens to be a 200-pound trophy.”  He adds: “I wanted it to develop into a fun trophy game, not particularly a rivalry.”

Historically, most trophy games, of course, are based in rivalries. But that’s changing as power conferences create trophies for series involving program with little shared history. Usually these series involve states that don’t share borders,  like Nebraska-Wisconsin or South Carolina-Texas A&M, but the situation with Arkansas’ next SEC-sanctioned rival is different.

That would be Missouri, which replaces LSU as Arkansas’ regular season finale.