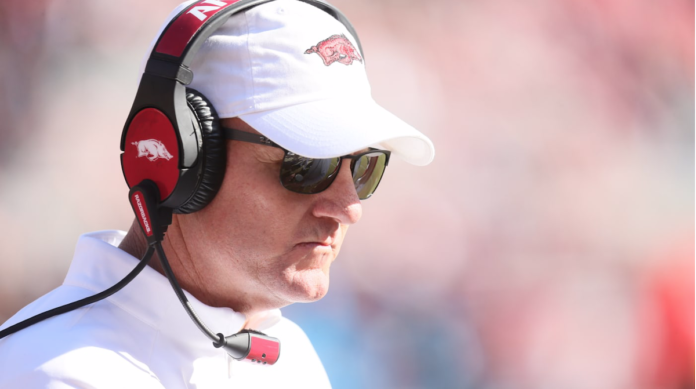 The Hogs fired Chad Morris after 22 games.  I’m not sure what firing a guy with 2 games to play accomplishes. Also, we got whipped by a former Hog QB who plays for a team that lost at home to the University of Central Arkansas.

Look, I know this ride has not been a good one, and it’s taken place in the “right lane” every mile of the way, going 50 when the speed limit’s 70.  I would imagine that Morris will finally get in the left lane when he leaves Fayetteville.

—The firing won’t make us any more competitive against LSU

—See above and replace LSU with Missouri

—We won’t meet the 47,000 person threshold for the WMS contract

—Few coaches want to work on such a short leash

If I were a coach interviewing for the job, I’d say:

—“Look, I’ve seen the talent you have on campus and half your skill players and D-backs can barely run a 4.6.  If you’re looking for immediate success with that bunch, you need to get a hold of yourselves.  If I’m going to have to work on the same short leash that Morris did, you’d better be prepared to offer me a huge buyout.”

The better plan would’ve been to keep Morris for the next year so that we can get another good recruiting class, but make him fire “the Chief” John Chavis and Joe Craddock.  With Chad on board Arkansas was losing of the 2020 recruits, but now we’re about to lose all of them.

Over the past four games, the Chief’s defense has given up an average of nearly 50 points.  Pretty difficult for an offense to pick up the slack on that.

Joe Craddock’s offense on the other hand has averaged just 15 points per game and has thrown 15 interceptions on the season against 11 touchdowns.  That’s pathetic.

And, how about his for decision-making:

—John Stephen Jones:  How do we leave him in until 5:00 to go in the first half (at the point 3 of 10 on passes for 27 yards).  Worse yet, how do we throw him back out there to start the 2nd half?  His biggest accomplishment was handing off to Boyd on his 76-yard TD.

Craddock should have his head examined and/or be thrown in the Fayetteville Police Department’s drunk tank for not putting the ball in his hands at least 15 times.

I know that in theory the buck stops with the head coach, but anybody who played football knows that the players get to know their position coach better than their head coach.  So, if the players quit on anyone, it’s them.  So, it seems to me that the focus should be on them more so than Morris.

Let me just cut to the chase.

—5 of 5 touchdown drives in the first half

—He’s the starter only because the first teamer for WKU got hurt!!!

—QB issues don’t matter much when you allow half a hundred, or close to it, per game.

The real question is this:  Can the players not learn, or is it that the coaches can’t teach?  Usually, the truth is somewhere in between.  But, if I was a bettin’ man I’d bet it’s more about the coaches not being able to teach. And the coaches most responsible for the hands-on teaching were Chavis and Craddock. They should be the focus of the athletic department’s ire this season, not Morris.

Already, enough of the players have let go of the rope to create gaping holes on offense and defense to think about being competitive.  That won’t change because Morris is gone.

We will, therefore, match the worst season ever at Arkansas.  That season, of course, was last season.  There’s no sense in firing a guy with two games left in the season. It’s not going to help the team win any more games. While Yurachek’s decision was inevitable after the Western Kentucky loss, it was also premature.

The above column is by Tommy Foltz

Who could replace Morris as the next Razorback football coach? See the below:

For more insight into Hogs football after Chad Morris’ firing, read my latest below: