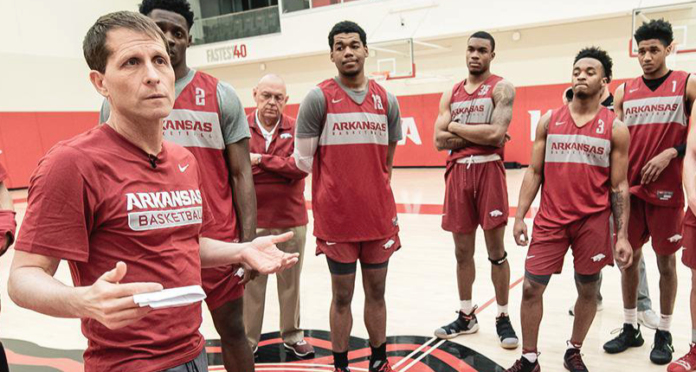 On Wednesday, an NCAA committee moved the three-point line in college basketball back by more than 15 inches. The current NCAA three-point line is 20 feet, nine inches, but that’s going to change to the international distance of 22 feet, ¼ inches starting in 2019-2020 at the Division I level*.

“After gathering information over the last two seasons, we feel it’s time to make the change,” said Colorado coach Tad Boyle, chair of the NCAA Playing Rules Oversight Panel. “Freedom of movement in the game remains important, and we feel this will open up the game. We believe this will remove some of the congestion on the way to the basket.”

In May, when the change was proposed, Boyle’s committee gave the following reasons for extending the line:

Arkansas basketball coach Eric Musselman thinks the change, on the whole, will be a good thing. “It gets college players a little more ready for where the NBA line is, but I do think it will change the game,” he told Southeast College Hoops’ Blake Lovell in May.

Moving the line back will cause a dip in overall shooting accuracy. Consider the last time such a move was made: Before the 2008-09 season, line was moved back from 20 feet 9 inches to 19 feet 9 inches. The percentage of 3-point shots made during ‘08-’09 compared with the previous season dipped from 35.2% to 34.4%.

“When you move back just a little bit, it can affect not only your percentage, but actually the form that you have,” Musselman said on the sports radio show “Hit That Line.” “I think it helps great shooters, but hurts guys who are trying to develop a three-point shot or are limited shooters. I think it’s gonna drastically affect them.”

How the new 3-point rule will affect the Hogs

Without this rule change, the 2019-2020 Razorbacks projected to unleash perhaps the most long-distance firepower in program history. Its best shooters are Isaiah Joe, who in one season established himself as the greatest deep shooter to ever hail from the Natural State, combo guard Desi Sills, swing Mason Jones and incoming graduate transfer Isaiah Moss.

The increased distance rule shouldn’t affect Joe, who took the majority of his threes from beyond the current FIBA line anyway. “I  see it really benefiting a guy like Isaiah Joe because he’s already got incredible shooting range,” Musselman said.

It’s harder to predict the influence on Mason Jones, who is a more erratic shooter than Joe but can get just as hot. Jones at times employed a step-back three pointer in which he shot from behind the current FIBA three-point distance, but advanced analytics are not publicly available to show current Razorbacks’ accuracy on attempts at 22 feet, ¼ inches or deeper.

Both Sills and Moss have shown nice, compact shooting forms with good use of legs. That means they shouldn’t need to fundamentally change their form in order to keep their high accuracy from the deeper FIBA line. Sills is the quicker of the two players, and I expect Musselman will urge him to continue to develop his ability to pump fake at the three point line and drive to the basket for a layup, floater or dish. Sills’ ability to create will be enhanced by the extra space that a deeper three-point line will provide.

For sure, the lion’s share of these deeper three point attempts should go to this quartet, with others going to point guard Justice Hill and incoming forward Jeantal Cylla. The extended FIBA line should put a stake through the days of Jalen Harris, Gabe Osabuohien and Adrio Bailey chucking up a random three-point attempt for good.

“We want to stretch the floor out as much as we can,” Eric Musselman told Lovell. “We really feel Jalen Harris can be that much more effective when we can put three to four shooters around him. He can really get into the teeth of the defense and either finish at the rim or get the ball out to three-point shooters if the defense converges.”

When Musselman said this, Jimmy Whitt (also a subpar three-point shooter) had not yet committed to the Hogs, but the same concept of spacing the floor goes for Whitt as much as for Harris.

Listen to more of the “Hit That Line” interview here:

Eric Musselman would actually like to see basket interference allowed.

It’s legal in International Basketball Federation (aka FIBA) regulations and Musselman developed a taste for it while coaching national teams of China, USA, Dominican Republic and Venezuela in various competitions including the Olympics.

In, that FIBA rule was his favorite. In U.S. basketball, from high school to the NBA, players aren’t permitted to knock the basketball off the rim once it’s touched the rim. Nor can they touch the ball, or the basket, once the ball has entered an imaginary “cylinder” above the basket and still has a chance to go in (unless as part of a dunk).

In FIBA, once the ball hits the rim, any player can swat the ball off the rim or tap it in**. And if Eric Musselman could see any FIBA rule implemented at the college level, this would be it. “I loved the live ball on the rim [rule],” he recently told sports radio hosts Tommy Craft and John Nabors. “Even on a free throw, when you’re able to knock that ball off the rim when it hits, it’s really, really fun.”

“The fans get into it, and you’re at the edge of your seat rather than reaching into your popcorn bag when a guy’s shooting a foul shot.”

Musselman has seen basket interference used in the NBA’s developmental league as well. In 2010-2012, he coached in what what then known as the NBDL, and saw that league experiment with allowing the rule. “Our players loved it,” he recalled. “It didn’t affect [the outcome] of a lot of games, but when it did, it added excitement.”

[This article is an updated version of a previous post]

Should FIBA, NBA and college basketball rules all the be same?

There’s a lot of irregularity between the rules of the three most influential organizations in basketball — the NCAA, NBA and FIBA. Besides the basket interference and three point lines, other differences include rules involving the shot clock, time outs, zone defense and the games’ playing time.

Eric Musselman thinks it would help the game overall, at all levels, if the same rules were used at all levels. Fans and players alike would benefit from such unification.

Hear more from Musselman on the new Razorbacks through this interview with Blake Lovell:

*The extended three-point line won’t take effect in Divisions II and III until 2020-2021.

**Under FIBA rules, it’s still a violation to block a shot a show on the downward flight towards the rim. That is, goaltending is the same violation at the FIBA, NBA and college basketball levels.