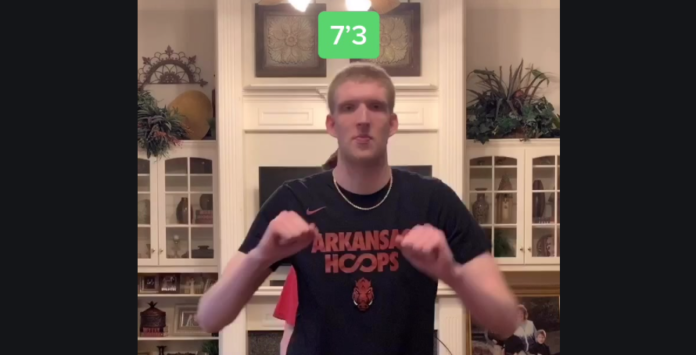 Hog fans are eagerly anticipating the debut of Connor Vanover, the 7’3,” 230-pound redshirt sophomore who played his freshman season at the University of California and then transferred to Arkansas last spring. He had to sit for a season due to eligibility rules.

Arkansas has a loaded recruiting class coming in this season including 6’9″ Jaylin Williams, so Vanover probably won’t see 30 minutes a game. But he should average at least 12 points per game as a Razorback given 20 plus minutes a game. If Connor Vanover can develop as an offensive threat on the low block, then he could be a legitimate 20 points per game player. Right now, he’s most likely a 12 to 15 points a game player.

“I think my size along with my shooting touch and skill makes me unique,” he said on a recent interview with Pig Trail Nation. “There’s not very many people with my size who have touch like I do — being able to stretch out the defense is one big thing I can do.”

“If I have a big guy coming to guard me I can take him out on the perimeter and open up the lane for other people. If that doesn’t work for them and they try to put a small person on me, I can go inside and have a big mismatch in there. I think that along with my size, being 7’3” with a 7’5”, 7’6” wingspan makes me a big defensive piece. So if they try to come in the lane I can stop them.”

Connor does present an intriguing threat to an opposing defense. He presents a double-edged sword to the other team because he can take a rim protector away from the rim with his shooting ability and a guard would have a tough time stopping a guy with a foot height advantage on the post.

Razorbacks fans saw what an outside shooting threat can do to a team when Isaiah Joe played. They also saw how hard it was to score inside when that shooter was not playing. The difference in Arkansas’ record between games Isaiah Joe played and the games he sat due to injury last year shows how important it is to stretch the defense.  Arkansas was 7-6 in conference games with Joe and 0-5 without.

If Isaiah Joe leaves for the NBA Draft, then there will be a big hole on offense — especially before freshman Moses Moody hits his stride. Even if Joe comes back, he will likely drive the ball more to the basket than he did in his first two season.

Along with incoming transfer Vance Jackson, the Hogs could use another big man outside threat to stretch the defense. Connor Vanover’s ability is perfect to fit that hole. He has the ability to shoot from distance and the height to create a mismatch or shoot over his defender.

During his freshman year, he averaged 7.5 points and 3 rebounds on 47% shooting, including 35.5% from downtown. He started the season in a limited capacity. But in his last 11 games of the season he averaged 12 points, 5 rebounds, and 2 blocks per game. In the regular season finale he had a season-high 24 points and 6 blocks against Stanford. He was 5 of 6 from 3-point range in that game.

Connor Vanover provide a sneak peek to Arkansas fans in the Red and White game at the start of the year. He showed off his talents there by posting 15 points and 7 rebounds on the winning team. That was one point shy of the team leader Jimmy Whitt.

Vanover is already a solid player with incredible height and a good shooting touch, but he’s still trying to improve before the next season — even through the quarantine.

‘I’ve got stuff set up where I have a weight room at home and I can go to our local church gym to get up shots. And basically everyday I’m going up there to lift and get up shots to make sure I’m still getting stronger and still getting better to get ready up for when this is all over.”

“A lot that I’ve been trying to focus on is my strength and quickness and ability to run up and down the court. I feel like for me being my height and size that’s one of the most important things to hold my own down on the post and also to be able to run with all the other guys.”

“And also just working offensively on keeping my touch smooth and also different moves in the post and on the outside. So I can have other things I can go to other than just a shot from three or the mid-range. I can post up, have some moves, and kick-out for other people. Just a lot of different stuff I can do out of that.”

Like all of the Razorback faithful, Connor Vanover is excited about this year’s team and is ready to play for the Razorbacks.

“I’m really looking forward to next year. I’m excited to see what’s in store. Ready to see what these young guys have to bring to the table along with the ones that sat out. I feel like with us, we’ll have a lot of experience to bring to the table all these new guys with all the talent that they have, I feel like we’ll be able to fix really well and really gel to make something good out of this season.”

“It’s been amazing to be able to rep Arkansas on my shirt. I’ve been an Arkansas fan all my life. I would always love coming to the Razorback football games and basketball games growing up so it really means a lot to rep that. My mom graduated from there so it’s really special to see all these people who are rooting for me.”

“I’m really most excited about going up there playing in front of all the fans. The fans are the life and the blood of the whole team. To go up there and really show them what i’ve been working on, what me and everyone else have been working on, would be really special.”

TikTok is a popular new social media where people of all ages make short funny videos. The entire Vanover clan got in on the fun and the result went viral. Connor’s video of a popular trend amassed a whopping 5.4 million views on the app:

“It was my idea. I kind of thought it would be kind of cool kind of funny to do a TikTok… So I talked them all into doing it and so one night we started practicing. It took probably like at least 10 takes because my dad especially, he has a tough time getting the rhythm down… but we finally got something that was decent and so like alright we’ll go with that.”

“So it’s kind of a way to get to show our family. I knew it would do alright because we’re kind of tall [understatement] and it’s cool to see that. Bbut I didn’t know it would do that good. Saw it on the news the next night and was like ‘What’s going on?’”

Connor Vanover brings more than just his viral fame to the Razorbacks. He has a smooth touch from beyond the three-point arc and a giant wingspan that helps him block shots.