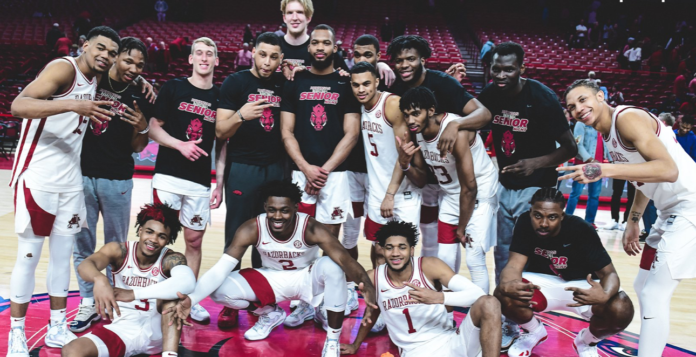 In the history of Division I basketball, only two teams have ever made it to the Big Dance as at-large bids while going four games below .500 in their own conferences.

If Arkansas loses on Saturday at Texas A&M, it will drop to 7-11 in conference. The chances it becomes the third team to join this group are zero.

But if the Hogs, who are coming off a 99-90 win vs. LSU, win on Saturday, what will they need to do in the SEC Tournament to go dancing?

Relive the glory that was Arkansas-LSU here:

Lunardi doesn’t put as much stock in the Hogs’ strong non-conference record as other experts do. He believes that the Razorbacks need to win the entire SEC Tournament to make the NCAA Tournament.

Razorback basketball has “really run out of margin for error, I believe,” Lunardi recently said.

On the sports radio show Hit That Line, Tye Richardson asked Lunardi how much of a factor that Isaiah Joe‘s recent injury should play for the tournament selection committee.

“I think it’s a factor for sure. Without it, we wouldn’t even be having the conversation. Because if they had lost those five games with Isaiah Joe, people would simply say they’re not a very good basketball — or at least they haven’t maximized their potential,” Lunardi said.

“In a way, it’s the only thing that’s keeping them in the conversation at the moment because the wins just aren’t there and you can’t presume they would have beat Auburn, Mississippi State or Florida. You can’t assume a win [there], because they lost a bunch of games when they had him and they’ve lost again since he’s been back.”

Lunardi did concede that there is the slightest of possibilities that Eric Musselman’s team could sneak in as an at-large.

“I suppose there’s a scenario where you win these last two games, you get to 8 and 10 in the league, in Nashville you win a couple games get to the final — you lose the great game in the final and sneak in as an at large. But I think those odds are extremely low and I think the Razorbacks are going to need the automatic bid.”

If the above were to happen, the Hogs would need some help.

He added: “You want to root for teams that you beat like Indiana, for instance, or maybe Alabama, to kind of have more value. Rooting for Alabama, it’s a double edged sword because they might steal your own spot, but Indiana would really be the only non-conference team on the list that can help the Hogs at this point.”

Fortunately, Indiana won its last game and is still looking strong in the deep Big 10.

“While the Hoosiers’ NET ranking of 54 is still a bit low, their 19-11 overall record and other advanced metric rankings (27th in Strength of Record (SOR) and 36th in KenPom) are all worthy of selection. Plus, they’ll have a shot at recording a sixth Quadrant 1 win when Wisconsin visits Assembly Hall on Saturday.”

Currently, in most projected brackets, Arkansas is considered to be a team ranking as one of the “Next Four Out” or what would be the next next four out.

But bracketology writer Chris Dobbertean is a bit more optimistic than Lunardi when laying out how Arkansas could make it. In talking about how the Hogs have won their last three of four games, he notes “that span that coincides with NBA hopeful Isaiah Joe‘s return from knee surgery.”

Heading into this weekend, “Arkansas is one of three SEC squads among the first eight teams out of the field, and Mississippi State is just outside of that group after Tuesday’s loss at South Carolina. And with those four teams gathering in Nashville for the SEC tournament at this time next week, the hopes for a fifth or sixth NCAA entry from the conference are far from dead.”

The bottom line is that, in reality, Arkansas’ NCAA Tournament hopes still have the slimmest margin for error left — but that’s better than none at all.

This man strains so that you don’t have to.