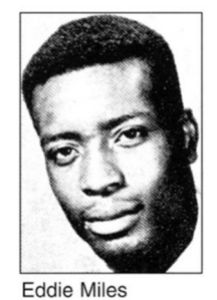 We’re taught in school that history, at its core, is comprised of facts: so-and-so did such-and-such on a certain date. Learn enough of those, and you know enough to write an essay, make your passing grade, and get on with graduation.

Unfortunately, history is a lot less clear cut than that.

The people wielding the most power often determine what the “facts” are, and which ones are passed down to following generations. Our past, it turns out, is riddled with voids. We can’t fill them all, but it can be enough of a start to acknowledge they are there.

This came to mind when reading today’s column by Arkansas Democrat-Gazette sports editor Wally Hall. At the end, he praises Jim Bryan, an Arkansas prep basketball legend who recently suffered an embolism. Nothing wrong with that. In fact, Hall’s pretty generous when it comes to wishing folks well.

What concerns me is the part where Bryan is described as “the second all-time leading scorer in Arkansas high school basketball history.” That’s not true. In terms of all-time career points scored, Bryan is listed as the state’s fourth greatest scorer.

The above records are kept by the Arkansas Activities Association, the state’s governing body of high school athletics. The fact that Hall missed Bryan’s standing by a place or two, to me, isn’t too big of a deal. What’s far more important is what the records don’t include. Namely, any mention of Jackie Ridgle and Eddie Miles – potentially the two most potent scorers in Arkansas high school history before current Bentonville star Malik Monk.

Miles, for one, averaged 21 points as a freshman, and then upped that each year to top out at around 32 points points a game as a senior. With numbers like that, there’s no doubt the North Little Rock native deserves a spot near the top of the all-time scoring list. But he’s not there, nor is Ridgle, because they played for all-black schools with records that have been largely lost, forgotten or destroyed. Even those which still exist and can be verified – such as Miles’ and Ridgle’s – haven’t been incorporated into the AAA’s record book. Until that happens, it shouldn’t be viewed as a true, official account of the state’s prep history.

This is a major issue that needs to be addressed. I’ve written about it time and time again. To the credit of the AAA, its assistant executive director Wadie Moore has been sympathetic to this problem and he has added Miles’ name to one category. But one mention isn’t enough when he (and Ridgle) deserve mention in multiple categories:

The AAA means well, but I want it to do a more thorough job with its record books. Jim Bryan, for instance, owns the top two spots in the season scoring totals below. But where are the season point totals for the three people in front of him in the all-time career scoring list? Surely, a Bennie Fuller season or two should be here. Same with Jacob Roark and James Anderson, not to mention the likes of Eddie Miles or Jackie Ridgle.

This issue doesn’t just apply to Arkansas. It’s occurring in other states, too, especially in the South. But some states – like Texas – do a better job than others. Arkansas should join their ranks.

Below are more scoring marks, according to the AAA’s 2014 record book. (One glance down the names shows why Rex Nelson tabbed Bennie Fuller as the “Wilt Chamberlin of the Deaf“)