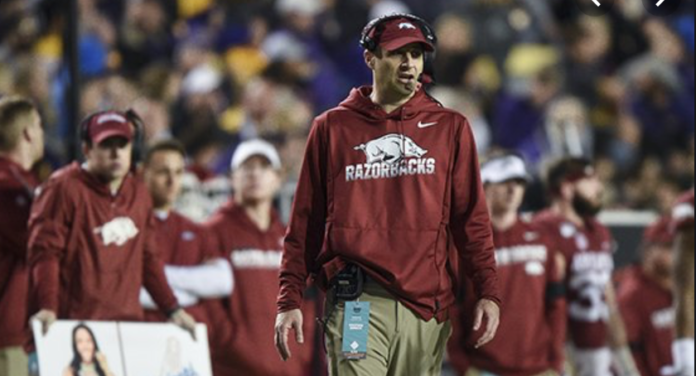 Just a few days ago, most signs pointed to Lane Kiffin becoming the Razorbacks’ new head football coach. The polarizing Florida Atlantic coach seemed to be the frontrunner for the position.

Then, on Thursday night, Kiffin interviewed for the Ole Miss position. On Friday, reports leaked across national and local media that a verbal agreement had been reached. Now it seems inevitable Kiffin will head to Oxford instead of Fayetteville.

This means that the three frontrunners for the job as of a week ago — Kiffin, Mike Leach and Matt Campbell — now appear out of the running. In the last few days, Leach and Campbell agreed to contract extensions.

In their stead has risen a familiar face — that of interim coach Barry Lunney, Jr.

The situation at Arkansas isn’t settled — but after a fruitless search, signs are pointing toward promoting Barry Lunney Jr., an alum/former star QB who has been the interim coach since Chad Morris’ firing.

To which USA Today’s Dan Wolken, also an Arkansas native, replied: “As I mentioned earlier tonight, this is a real possibility. Arkansas fans should be prepared.”

As interim, Lunney Jr coached the Hogs in two losses, but his teams played much harder than Morris’s did. Plus, by all accounts, he hit his interview with Yurachek this week out of the park.

Many Hog fans find the idea of simply removing the interim tag from Lunney to be underwhelming at best, a sign of unfathomably desperate times at worst. After all, Arkansas is clearly a better program (in terms of facilities and history) than Mizzou and Ole Miss.

Yet, Kiffin is reportedly heading to Ole Miss while Willie Fritz, the Tulane coach only 4% of fans wanted anyway, has stated Missouri is his “dream job.”

In response to Schroeder’s Tweet, local Razorback insiders are also chiming in.

Mike Irwin, the longtime analyst for Pig Trail Nation, Tweeted on Friday night that he was “just told that Lunney and [Jeff] Traylor have been officially notified that they have the option of staying [as assistants]. This would indicate that whether it’s Kiffin or not [Hunter Yurachek] has secured a hire who is probably coaching” during Saturday’s conference championship games.

He also points out that it’s possible that Arkansas may not be totally out of the running for Kiffin — provided they can ante up enough cash. Kiffin’s agent is Jimmy Sexton, who was also the agent for Houston Nutt, Gus Malzahn and Chad Morris.

What if Sexton tried to lure Arkansas into a bidding war? I can see why the BOT might tell HY, You weren’t here two years ago when he pulled this same stuff on us. We’re not going to play this game again. https://t.co/HkdA8HaI5h

Rock City has the Natural State swag you need

Let’s say Lunney, Jr. is hired as the next coach. His lack of experience will give many Hog fans a conniption fit. Barry, after all, has never been a head coach before. He’s worked eight seasons in the college ranks, serving as a quarterbacks and wide receivers coach at Tulsa, a co-offensive coordinator at San Jose State and a tight ends coach at Arkansas.

And, yes, he won’t packed Razorback Stadium in the first games of 2020 like a Kiffin would.

So sure, promoting Lunney, Jr. is a gamble.

But it’s a calculated risk that may just be worth it. Consider the following benefits he brings to the table:

In that scenario, Yurachek would be choosing between keeping Lunney on board for 2021 and going with a clearly superior head coach who wants to coach the Hogs.

That’s a good place to be in compared to the current situation.

The doomsday scenario is that the wheels totally fall off under Lunney, Jr, and that his team plays for him as they did for Morris in the Mississippi State and Western Kentucky losses. But that won’t happen. Lunney is too smart, too dedicated and commands too much respect.

What About Eliah Drinkwitz?

George Schroeder also Tweeted that Drinkwitz, the Alma native who is coaching a Sun Belt powerhouse in Appalachian State, should still be in the running.

Like Lunney, Drinkwitz too would want to coach the Hogs. He’s a little less of a risk since he’s had a season of head coaching. Like Lunney, Yurachek could get him on the cheap. And perhaps structure the same bonus incentive into his contract.

Plus, Vegas thinks he’s the frontrunner at this point. Below are the latest odds for the new Hogs coach from CBS SportsLine. They were published a few hours before news broke that Lane Kiffin would likely ink with Ole MIss:

Odds for Next Hogs Coach

Eliah Drinkwitz, who also goes by Eli, comes from a stellar coaching tree:

—2009:  Moved to Auburn to do football operations

—2013:  Gus goes back to Auburn; Drinkwitz stays in Jonesboro to work with none other than Bryan Harsin who is also a potential candidate

“The guy has been part of success everywhere he’s coached. He’s never been on a staff that lost a bowl game,” contributor Tommy Foltz wrote.

“To be fair, Appalachian State went 11-2 in 2018, so it’s not like he inherited a talentless team or did an extraordinary job of re-building a program.  Nevertheless, he hasn’t broken something that didn’t need to be fixed.”

“He also checks a lot of boxes related to Arkansas. He obviously knows Arkansas culture because he grew up here. He’s 36, so he’s got the energy.  My guess is that, like a lot of us, he probably woke up every morning as a kid and day dreamed of running through the A with a red jersey on.”

Perhaps the answer is to hire Drinkwitz as head coach and promote Lunney Jr. to offensive coordinator.

The below story about Lunney, Jr’s devotion to Arkansas published in late November, 2019:

Barry Lunney, Sr. remembers it like it was yesterday.

The year was 1993, and Danny Ford was entering his first season as head coach of the Razorback football team. Lunney Sr.’s son, Barry Lunney Jr., was a second-year player debating whether he should stick it out at Arkansas.

Ford was an option quarterback coach, and Lunney Jr. hadn’t been recruited out of Fort Smith Southside to run the option.

So Barry Lunney, Sr., then the head coach at Southside, told his son they should look at the schools that had recruited Barry and transfer away from the Hogs.

Lunney Sr. called three schools and the coaches at each of them said they would take Barry Lunney, Jr. So dad called son and relayed the news.

On the other end of line, sitting in dorm room, Lunney, Jr. “got dead silent,” Lunney Sr. recalled. “I thought we’d lost connection. And he said, ‘Dad, I don’t want to go anywhere else. This is where I’ve always wanted to be.'”

Lunney Jr.’s loyalty to the Razorbacks paid off as a player. He led the Hogs to their first-ever SEC West division title in 1995, one bright spot among many in a productive four-year career.

Since 2013, Lunney Jr. has been a Hogs’ assistant coach and is currently the interim head coach as Hunter Yurachek looks for a permanent replacement. No matter how much some Hog fans want Lunney Jr. to be named as the new coach, his lack of experience means he almost certainly won’t be.

As strategic and smart as it would be for Lunney Jr. to remain on staff for the next head coach (just as he served as the Arkansas native thread of continuity from the Bielema to the Morris era), there’s a chance he’ll be let go.

Which means, Arkansas’ Friday game against Missouri — in which the Tigers are a 12.5 point favorite according to sites like ComeOn betting — could be Lunney Jr.’s last game as a Razorback. Whether Lunney Jr. stays or goes after that game, Hog fans should be thankful for his contributions over the years.

“He loves the sport. He loves that university, but he really enjoys being around the young men and helping them to achieve goals… He’s passionate about Razorback football.”

“It’s hard to talk about your own children because you can be very prejudiced… He’s coached for me, he’s played for me.” [In all, Lunney Sr. won eight state championships at Southside and Bentonville High.]

“Certainly I love him as a son, but he’s very smart and has football sense and awareness just can’t learn at a classroom. He studied it as a young boy. There are things that came very natural to him that made me jealous as a coach, not being able to have those intuitive things that he has.”

“Confidence is a very fragile thing…. Once you’re trying to reestablish a new program, a new philosophy, and the belief system in it, and you get to that point and you can’t get across that line [of winning], you can’t cross over it.”

“[With] these kids, it doesn’t take much sometimes for that negative mindset to start setting in. Here’s the thing that happens: In their minds, they kind of go through this ‘Here we go again.'”

“Everything starts going bad. And that is one of the hardest things to overcome…. Kids will do what you ask them to do in the weight room. They’ll do what you asked them to do in the off season, but one of the hardest things I’ve found in coaching was to get a team go out and do it on the field and accomplish that [win] and get that mindset over and over — not ‘Here we not go again,’ but ‘We’re going to go make a play.'”

For nearly two quarters out of four, Lunney Jr.’s Razorbacks changed that mindset against No. 1 LSU on the road last weekend. Problem was, in the other two quarters, they regressed to the same “Oh no, here we go again” despair on the way to a 20-56 loss.

On Friday, the Hogs have little more to play for but pride — a chance to show the world that the worst part of the worst era in Arkansas football is in the rear view mirror, and the long, slow climb back to the sport’s highest levels has begun.

“I think it’s pretty easy to approach this week knowing we’re probably not going to be together as a staff after Friday,” Lunney Jr. recently said. “It’s about the players. We want them to experience the success we had as players. I think you just have to look yourself in the mirror and understand you got into this for the players. We have to give them our best, too.”

“I hope for our fans and the people who are on the fence about coming to this game, I hope they come out. We’ll have a football team and a fan base that will unite and show that true Razorback spirit this state really has,”

“My time in high school, I got to play in a state title game there. My father coached in 11 state title games as a coach. War Memorial is a special place for me and my family. Some of my greatest moments are in that stadium as well. I just want our guys to experience that on Friday.”

“I want them to walk away on Friday with their moment.”

In making Arkansas-Missouri all about the players in his typical selfless way, Lunney Jr. reminds Hog fans how much he’ll be missed if the new head coach chooses to let him go.