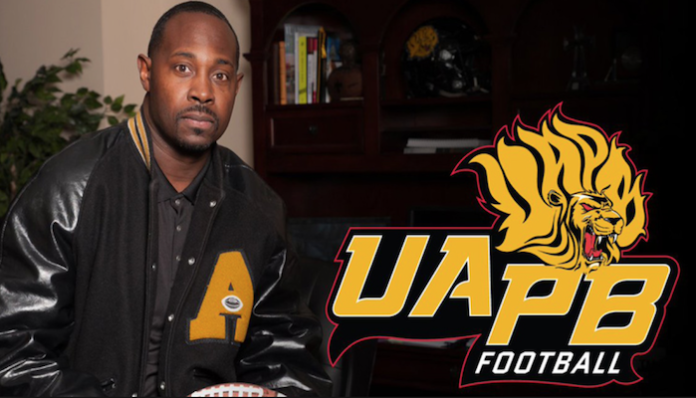 Wednesday started like any other recruiting day for Cedric Thomas. The UAPB head football coach was driving across Arkansas and the region, however, when things took an unexpected twist.

A group of former teammates started calling the second-year coach all at once.

“I was thinking ‘What done happened at the office?,” he recalled. Fortunately, nothing bad had gone down. Instead, Cedric Thomas learned from his athletic director, Melvin Hines II, that his school had just agreed to play the University of Arkansas in 2021 and 2024.

Although Hines is a Mississippi native, he played cornerback for UAPB and knew this was a huge deal. The Arkansas Razorbacks haven’t played an in-state football opponent since World War II, and as a player he always heard from Arkansan teammates how much they wanted to play the Hogs.

In fact, he had a few Golden Lion teammates in 1998 and 1999 who had come from the University of Arkansas. “When you at my roster, you had guys like Chris Akins, Kevin Williams and Ron Johnson who came from Fayetteville as transfers,” Thomas said today on 103.7 The Buzz.

“Some of those guys hit me up,” Thomas continued. “My phone was blowing while I was out on the road recruiting …. They were saying ‘Man, congratulations. I wish I had that shot. It’s a big platform.’ … Now that [the game] has come to fruition, it’s really a blessing. It tells you about the forward thinking of the state.

On whether playing the Razorbacks will make it easier to recruit Arkansas kids:

Cedric Thomas: “Without a doubt, that’s almost every kid’s dream. It’s a huge recruiting tool as you go to schools around the state. I think we might have picked up two or three commits yesterday when [the news] came out.”

On how excited the current younger players are about the prospect of playing UA in 2021:

Cedric Thomas: “We’ve made a concerted effort to recruit more in-state kids, so of course those kids were livid, they were excited because they know a lot of guys up there. They’ve got a lot of friends and guys who they played with or against on the [Hogs] team.

“Some the out of state kids look at it as SEC competition. They have an opportunity to compete with SEC schools before they get out of here, so those guys were excited.”

On why it’s important to play Power 5 schools beyond getting paid boatloads of money:

Cedric Thomas: “Besides the financial standpoint, I want my kids to get that exposure. We’re gonna have an opportunity to have kids who are gonna play on Sunday. And I know personally [NFL] scouts want to see tape of those games [against Power 5 teams].

He talks more about his anticipated improvement for UAPB from his first year going into his second year 3:44, on SWAC teams not being able to play in the FCS playoffs (8:20) and more:

And listen to UAPB athletic director Melvin Hines give his predictions on what will happen at the UAPB-UA 2021 game here:

If you’re interested in Arkansas sports heritage, including special features on Muhammad Ali at UAPB and the UA, Norm DeBriyn’s recruitment of black baseball players in Pine Bluff and the forgotten “Black Razorbacks” of Fayetteville, click the below for a preview of my book: