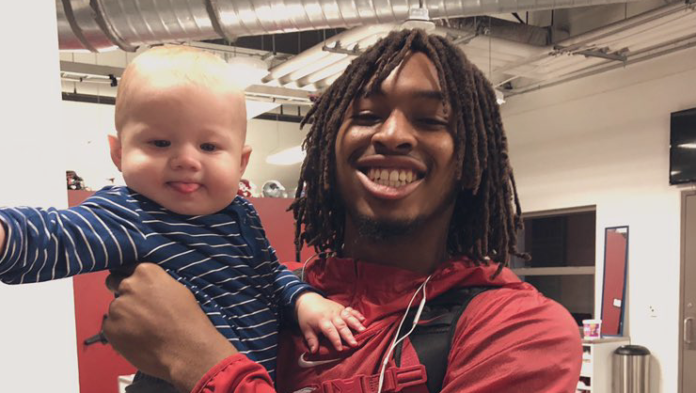 The Razorbacks desperately need to be more explosive on offense. Joe Craddock, the Razorbacks’ offensive coordinator, knows it, too. And he has good news: Help is on the way.

In a recent press conference, Craddock reserved his highest praise for two new Razorbacks who should make a big difference come fall. The first is Myron Cunningham, the 6’5, 300 pound offensive tackle KJ Jefferson helped recruit to campus. Craddock has been impressed with Cunningham, who is pushing Colton Jackson for the starting position at left tackle.

Myron Cunningham has only been here a month and a half and he power cleaned 345 pounds today. His body just looks a lot better,” Craddock said.

Later, he turned his attention to the Trey Knox. “The one who has really caught my eye besides Myron is Trey.”

“I think he’s going to be a really good player for us,” Craddock said. “Not saying we didn’t hit on everybody else but I’m saying we definitely hit on Trey Knox. I think he’s going to be a good player for us through the years. He’s got the potential and the want-to and the drive and the desire to be a special player in the SEC and the country and even at the next level.  So I’m really excited about him.

Craddock also provided details on how Knox originally came up with the “Snag Crew” nickname for the Arkansas wide receiving group. It’s a nickname that Hogs wide receiver coach Justin Stepp has embraced.

Originally, Knox applied to the name to himself and high school teammates. He was “Snag Crew CEO.” But Stepp would having none of that at the UA. He changed it whenever he signed here because he’s not CEO anymore. Stepp took over that role.

It’s just something fun. Everybody started playing this game because it was fun. Even at the highest division of college football, he gotta keep it fun. If the guy’s not having fun, they’re not gonna be the best player they can be.”

A big part of that is getting along with local fans. Based on the feature photo above, that’s been no problem so far.

Listen to Craddock talk about Trey Knox and the wide receivers starting at 6:55 below:

Trey Knox, when he came on his visit, I guess he came late last February maybe last March, and when he walked up, Coach (Joe) Craddock and I looked at each other and said, ‘We’ll never see that kid again.’ Just because he was so highly recruited, Auburn, Clemson, Florida, Ohio State. And just built a relationship with him, man. Like I said the other day, it takes a village to recruit these kids. It takes everybody. I didn’t recruit them by myself. Coach Craddock obviously being the OC, Coach (Chad) Morris the head coach and then everybody on offense. When these kids call in, they talk to everybody on the staff. It was a lot of fun, obviously competing against some of the best schools in the country.”

Stepp continued: “Same thing with Shamar [Nash], being able to flip him from the school he was committed to (Missouri). It’s just been a lot of fun. Really excited about what these two guys can bring.”

When asked how Nash would be used, Stepp said: “I envision him playing probably all three spots. Majority to the field, then a slot guy to the field, but not being afraid to put him into the boundary, as well. He’s got a unique skill set. That’s the thing I’m most excited about in our room, is there’s a lot of guys that can play a bunch of different spots. The competition’s going to be great. The competition makes everybody better, man.”

For more insight on how the receivers are meshing with the likely quarterback starter, check this: