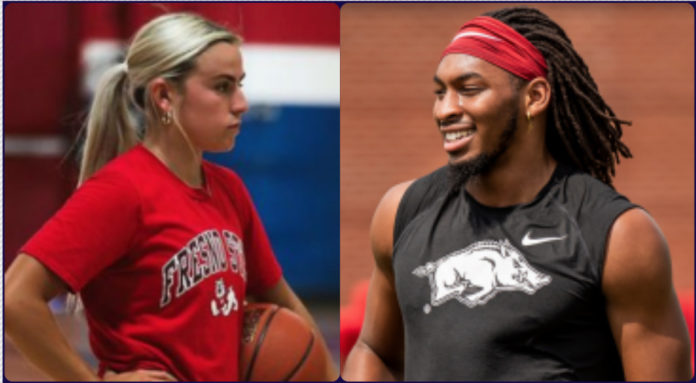 Treylon Burks may be Arkansas’ best receiver, but teammate Trey Knox has something he doesn’t – a dog. Or at least a more appealing one.

As the clock struck midnight July 1 signaling the beginning of collegiate athletes cashing in on their name, image, likeness (NIL), it was Knox, and not Burks, who struck a deal first.

PetSmart, a national pet superstore, signed Knox and his husky, Blue, to a social media deal.

“I have always been proud to be a student-athlete and an Arkansas football player, but I am just as proud to be a dog dad to Blue,” Knox said in a statement. “It was a clear fit to work alongside PetSmart in this game-changing opportunity showcasing my life of blue and how PetSmart fills all her needs.”

Not many Arkansas football fans would have bet that Trey Knox was the first Arkansas athlete to sign a deal. After all, his performance hasn’t been great. After a promising freshman year, Knox was almost nonexistent as a sophomore. In 14 career games, he has 35 catches for 455 yards and three touchdowns – pedestrian at best.

However, Knox is an example of how marketing — especially to the younger generation — may be deeper than just statistics and on-field performance. Companies are seeking out athletes who have a large social media presence and who are active on apps like TikTok that appeal to young consumers.

Those twins were in New York City’s Times Square to announce their deal with Boost Mobile. I had no idea who they were, but my 12-year-old son, J.D., identified them immediately by their TikTok posts.

The blond sisters enjoy success on the court, but they have achieved a national cult status through all of the major social media platforms that dwarfs the attention that would normally be given to a pair of mid-major women’s basketball players.

“Just using the twin thing, because people love that to our advantage, trying to connect with our audience as best as possible,” Hanna Cavinder told USA Today Sports. “We never thought it would lead us to a Times Square moment, but it kind of happened.”

The social media influencer set as well as those with the right “look” or circumstance, such as Knox and his pet, may be an X-factor in helping athletes in Olympic or women’s sports (or seldom-used players in the big three men’s sports) garner more attention.

We’re already seeing this play out with the Arkansas football team’s offensive line.

On Tuesday, a majority of the players took to Twitter to announce a sponsorship deal with the local Wright’s Barbecue.

Some of those linemen are relatively well known, but there’s no way that the typical Arkansan already knew who Austin Nix, Ryan Winkel, Josh Street and Devon Manuel were.

In this respect, the NIL is a positive thing.

Think about how many endorsements over the last few years that Arkansas basketball star Chelsea Dungee could have scored with her model looks and clutch play on the court. That attention obviously would have helped the women’s basketball program as Coach Mike Neighbors looks to market it to recruits and fans.

There is no doubt the Cavinder twins have spurred an interest in Fresno State women’s basketball. There’s no way my son, J.D., would have known so much about the Bulldogs program without them.

Eventually, some of Arkansas’ bigger names will cash in on appearance and apparel deals. It’s bound to happen. Businesses will most likely become more aggressive as time goes on, too, figuring out how to work with the university’s official NIL company which facilitates deals between Razorbacks athletes and corporations and businesses.

I haven’t seen it reported, but it’s a good bet that’s how Knox and Blue were paired up with PetSmart.

Universities will do their best to “protect” its athletes, but many of the student-athletes will try broker deals independently as firms and companies try to broker deals.

That could get pretty wild and maybe shady. Still, it’s clear that most student-athletes are tired of regulations to their NIL.

It opens up a major can of worms including in recruiting.

A south Florida gym owner, for instance, has offered every Miami football player on scholarship an annual $500 payment to promote his business.

The gym owner, Dan Lambert, has started a corporation “solely focused on putting money in the pockets of Miami football players,” ESPN reports.

Don’t expect this kind of thing to end in Miami. What happens when Arkansas football’s rivals start corporations to finance other teams that are more lucrative that what Arkansas boosters are offering at that time?

It could be an arms race that spins out of control fast, not to mention the pontential locker room tension spurred by certain players signing lucrative deals while others may not be as marketable.

Still, this new NIL era reflects decades of momentum in this direction anyway.

In the end, I expect all the growing pains and mess that could be created will be worth it to give those men and women a chance to do what their schools have done for decades – make money off of them. It was due time, and while policies and procedures may have to change, the opportunity that now exists for those players is good.

And Trey Knox and the Arkansas football offensive line has proven you don’t even have to be household name cash in.

Perhaps these offensive linemen won’t be the first Arkansas student-athletes to experience the saucy glory of an BBQ sponsorship.

“Fat Tony’s BBQ basically sponsored Oliver Miller in 1991-92 and single handedly cost us a national championship because Big O got so chubby that his foot broke.”