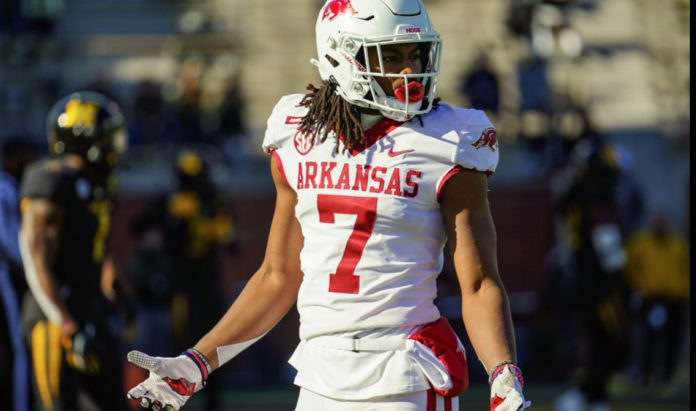 Outside of concerning injuries to key defensive backs, the Arkansas football program is sitting pretty these days. After a physical and hard-fought season-opening win vs a Top 25 Cincinnati squad, the Razorbacks are rising in almost every major and minor college football poll, going up a few spots to No. 20 in the College Football News rankings, up to to No. 19 in the AP, No. 15 in 247Sports, No. 13 in the Football Writers Poll and rising to No. 11 in Bleacher Report.

Fox Sports’ RJ Young even has the Hogs at No. 8, above Clemson, USC and Oklahoma.

With Razorback victories in two very winnable games in the near future, vs South Carolina and Missouri State, the biggest polls should have Arkansas in their Top 10. That would be the second year in a row such an early-season Top 10 ranking has happened for the Razorbacks, a near unfathomable occurrence during the long, dark night of the Chad Morris era.

Cultivating an edge motivated by a chip-on-the-shoulder mentality helped Arkansas football coach Sam Pittman lift Arkansas from those depths, but it remains to be seen how Arkansas will perform when it’s far more often the favorite rather than the underdog.

Pittman knows that keeping such a mindset will help keep his team sharp, even as they rack up the wins week after week and the embarrassment of last year’s destruction at the hands of Georgia – when the Hogs were last ranked in the Top 10 – recedes farther into the rear view. “We always find a reason to play our brand of football. We like who we are,” he said in Monday’s press conference. “I don’t know how good we are… But as long as we keep that chip, the disrespect chip, we’ll find a reason.”

If perceived disrespect is what Pittman wants, then he should send a thank-you ole cold beer to Fox News. Because not long after one of their analysts was pumping Arkansas up with a Top 10 ranking, another part of the company flubbed the identity of one of Arkansas’ most important players on a mislabeled photo.

The headline Knox calls out, of course, refers to Joe Foucha, the former Razorback football defensive back who transferred to LSU along with ex-Hog Greg Brooks Jr. this past offseason. Foucha faces a four-game suspension because of what multiple reports cite as an “academic issue.”

Although Foucha had started three years at Arkansas, he was not expected to be a starter heading into the season opener and did not dress out for the Sunday night against Florida State. He ended up missing one of the must gut-wrenching early-season losses in LSU football history, a 24-23 defeat on the heels of a blocked extra-point attempt.

“It’s really unfortunate,” Kelly said about the absence of Foucha, who is appealing the suspension. “Joe’s done everything we’ve asked him to do.” Kelly added they hope to “get him back as soon as we can.”

Brooks, who did play, had five tackles.

Afterward, a Florida State player posted “No fake accents on this team…,” a spicy reference to the Southern accent first-year LSU coach Brian Kelly awkwardly tried on during the offseason (along with an equally awkward, Chad Morrisian recruiting dance video).

Fox News, which did correct its Trey Knox/Joe Foucha caption blunder a few hours after publication, isn’t the first media outlet to make this kind of mistake. A couple years ago, the SEC Network confused former Arkansas basketball players Jalen Tate and Moses Moody multiple times. Last spring, a CBS writer mistakenly wrote that formerly No. 1 Auburn beat the basketball Hogs instead of the other way around.

These sorts of things will happen again. Fox News and its legion of content creators, after all, will never be invested in learning as much about the Razorbacks as local media outlets.

This kind of flub can only help motivate Trey Knox to play so well that even national sports photo editors know his face. As much as Razorback fans may want to disparage the media outlets who make these mistakes, it’s ultimately a way to further fuel the perception the Hogs are still being overlooked or disregarded despite their steady climb back into the Top 10.

Sure, Louisiana natives Greg Brooks Jr and Joe Foucha both transferred to LSU to play for their “dream school,” but as Razorbacks they were getting plenty of reps and playing time. Knox, meanwhile, struggled for most of the past two seasons before breaking out as a tight end. Indeed, Knox was frustrated enough to consider transferring after his freshman year in the turnover at the end of the Chad Morris tenure, said Dwayne Beasley, his trainer from his hometown of Murfreesboro, Tenn.

But Pittman convinced Knox to stay. “He talked to Pittman, and he told (Knox) what he had in store for him,” Beasley told Christina Long of the Fort Smith Times Record. “He embraced that, and you see now he’s first in Pittman’s offense. I think Pittman coming in was the best thing that happened for Trey.”

Knox’s sticking with it stands out all the more, however, as others have left in an increasingly fluid college football player market.

“You can hit the portal and somebody can offer you money to come to their school,” Knox said on the “The Hog Pod with Bo Mattingly,” referring to NIL deals. “Five years ago, people would’ve thought you were crazy for saying that. So things have changed quickly.”

The Razorbacks sports commentator broke down the significance of Knox’s position change on a recent episode of “Locked on Razorbacks”:

“We know he’s got great hands, we know he’s got a wide receiver mentality, we know he is athletic. Can he do all the other things as far as the tight end goes to transition into that position? Can he make it happen? And I think it’s pretty safe to say that, yeah, he’s pretty good at that. So he takes care of business and has a huge game for Arkansas.”

“I think that having a weapon like that, a guy that size, a guy with that mentality of almost like a wide receiver and all those things – that’s going to be nothing but great for Arkansas, especially when they get into SEC play, going up against some really good defenses.”

“Having a middle-of-the-field guy or a guy who can run as well as any tight end in the country and have the athleticism to go with it, he’s going to be one of the quarterback’s best friends, especially when it comes to KJ Jefferson.”

See all of Nabors’ takeaways here: