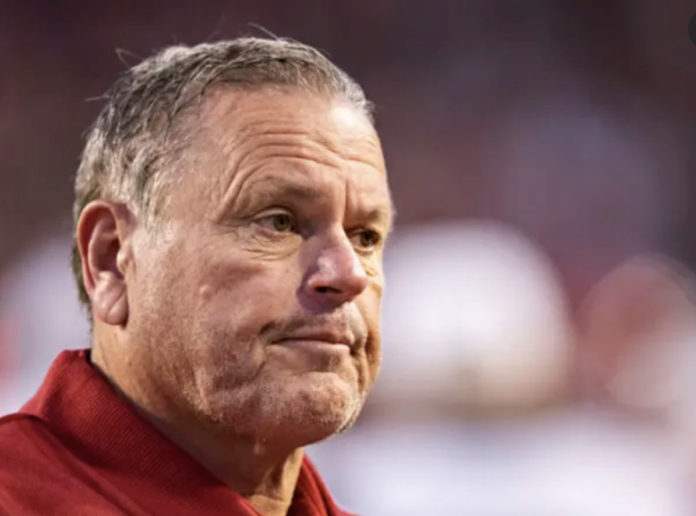 Practically every SEC football coach has his haters. Given the big-time exposure that comes along with the job, that’s no surprise.

Success breeds contempt, so it’s also no surprise to see guys like Nick Saban, Kirby Smart and Brian Kelley get consistently ridiculed by influencers and media members alike (in the haters’ defense, Kelley shouldn’t have tried to impress recruits by dancing on camera).

Sam Pittman, meanwhile, has mostly been able to avoid the slings and arrows. It helps that his Arkansas football program, perhaps with the exception of a three-game losing streak last season, has been on an upward trajectory since he took over in December 2019. Even more significantly, he comes across as a genuine, likeable guy. If ever there was a major college football coach whose brand is “not a jerk” and “not a nut job,” it’s the 60-year-old out of northeast rural Oklahoma.

Most of Pittman’s criticism has come from fringe fans and weird wannabe media. In November 2020, Pittman went off on Twitter against a fan who insulted his integrity in the wake of an LSU game ruling against Jalen Catalon. Then, in October 2021, something called Cable News Watch dared to a) comment on sports and b) call him an “idiot.” That didn’t end up going well for whatever incel was working behind the curtain of that outlet’s Twitter account.

When it comes to more mainstream media, Sam Pittman got plenty of early flak after his initial hiring at Arkansas that questioned his ability to be a head coach after decades of offensive line coaching. That criticism, however, was focused on his inexperience, not character.

In the last few days, however, a Tennessee Titans writer took a cheap shot at Pittman’s character on the heels of an SEC Media Days in which Pittman came across as one of the most beloved coaches around.

Jimmy Morris, the editor-in-chief of SB Nation’s Tennessee Titans site, apparently woke up with an axe to grind in the wake of an interview that Pittman gave last week about Titans rookie Treylon Burks, the former Razorback star. Burks has had issues with conditioning in the spring, missing the last three open practices while not being able to finish the first day of rookie minicamp in May, laboring through individual drills and needing an inhaler, according to the Nashville Tennessean.

Pittman provided some background in a radio interview:

“The community is going to be proud of him once he gets in shape,” Pittman said on 104.5 The Zone in Nashville. “I’m assuming he didn’t show up in great shape. It was the same thing when he was a sophomore. He wasn’t in great shape. He couldn’t last through practice. It’s not that he quit, he just couldn’t do it anymore. He was out of shape.” Then, with typical Pittman wit, he quipped: “I don’t know what hunting hogs does for your cardiovascular, but evidently, not a whole lot.”

“I remember last year against Rice, he had dropped some passes and wasn’t playing well,” Pittman added. “He wasn’t a major factor in that game. He got some confidence as the game went on, and the next game started showing what was [worthy of] a first-round draft pick. You’re going to get a great team leader.”

The combination of Burks’ lack of conditioning, combined with Pittman’s foreknowledge (to a degree) and the case of another Pittman-coached player we’ll address soon, was too much for SB Nation’s Jimmy Morris to handle. He essentially wrote that Pittman was untrustworthy: “Jon Robinson [Titans’ general manager] should never trust Sam Pittman again.”

“It sure seems the Tennessee Titans didn’t have all of the information when it came to Treylon Burks. You know who the last player the Titans drafted coached by Pittman was? Isaiah Wilson. Pittman was his offensive line coach at Georgia. As Michael Scott would say, ‘Fool me once, shame on you. Fool me twice, strike three.'”

Wilson, coached by Pittman at Georgia, is a name that gives Tennessee Titans fans the twitchy eye. The big lineman was the franchise’s first round pick in 2020 and proceeded to have a spectacularly unsuccessful rookie season, playing a total of three snaps on offense and one on special teams. That wasn’t the worst of it, though. Wilson also got a citation from Tennessee State University campus police during training camp, a DUI arrest during the first week of the regular season, a one-game suspension for violation of team rules

Is Pittman, however, to blame for the unwise choices that Wilson made once he left college? I don’t think so. The best college coaches treat their players like grown men, and part of learning to be an adult is exercising the freedom to make decisions that are not always the best. Clearly, Wilson didn’t do well with that in his rookie season, but that doesn’t mean he can’t learn from his mistakes going forward.

And that kind of growth, apparently, is what Burks is already on track to do, according to ESPN NFL reporter Diana Russini said.

Arkansas football fans would love to see this the start of a wonderful debut season for the most talented receiver to ever play for the Razorback program. The hope is that the last few months have simply been a wake-up call for Treylon Burks. Yet while Roussini is clearly a Tennessee Titans insider, her words may need to be taken with a grain of salt, says Locked on Titans’ Tyler Rowland.

“And then she also said that AJ wouldn’t be traded. And she sent out all of the messages for the Titans organization that he wouldn’t be traded. And then he was. So while I do want to believe this report from Roussini and clearly it would be a positive report for the Titans, I do have to take it with a grain of salt because maybe after the PR nightmare within the fan base, that was the AJ Brown trade the Titans organization feels they need to talk more into the media to calm their fan base.”

That may be the case, but whatever situation is going on with the Tennessee Titans media and questions about Burks’ conditioning, Sam Pittman doesn’t deserve to take cheap shots concerning his trustworthiness. Sure, the Isaiah Wilson situation in Tennessee was unfortunate, but the sample size is way too small to merit these kinds of pot shots from those who want to be taken seriously as sports media members.

Pittman’s interview about Burks is here:

Vrabel added that Burks has improved through embracing the “little things.”

“That you understand where to go as we continue to add installation,” Vrabel explained. “There’s a lot of information that we give him. That you can come out and compete. The biggest thing for training camp is earning the trust of teammates and coaches, not only developing. … It’s also about trust and where you’re supposed to be for the quarterback. Doing those things day in and day out with some consistency.”