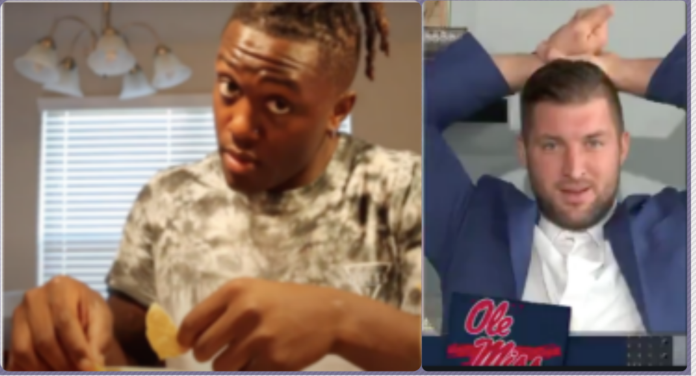 Tim Tebow has taken plenty from Arkansas over the years.

In 2007, the former star Gators quarterback took what should have been Razorback Darren McFadden’s Heisman Trophy, not long after McFadden ran for more than 200 yards in a thrilling, three-overtime win over No. 1 LSU.

Two years later, when Tebow was a senior, he led what was then the nation’s No. 1 team. Arkansas, in its second year under Bobby Petrino, visited the Swamp and had the Gators on the ropes in the fourth quarter for a monumental upset. But, with Tebow driving Florida down the field down 20-13, referee Marc Curles decided to call a personal foul on Arkansas defensive lineman Malcolm Sheppard, even though the SEC office later admitted no video evidence supported the whack judgment.

That call, one of a few bad ones that day, essentially turned the game over in favor of Florida.

Tim Tebow took that win, too.

So, given the precedent set, it shouldn’t hurt Tebow to take some more from the Razorbacks. This time, it’s the flak he caught from Hogs wide receiver Mike Woods this weekend in the wake of Arkansas’ 33-21 win over Ole Miss.

After the win, Tebow Tweeted his congratulations to the program and head Hogs coach Sam Pittman. But then Woods rushed across the middle like a social media Jalen Catalon to stop Tebow cold in his tracks.

Woods has good reason for his call out of Tebow. The back story here is that before the game, Tebow went onto the SEC Network’s “SEC Nation” to share his prediction with analysts Jordan Rodgers and Roman Harper and host Laura Rutledge.

Rodgers and Harper both predicted Arkansas would win. When Tebow heard that, he at first laughed and then looked utterly shocked. It was apparent Tebow didn’t think highly enough of Arkansas to believe its defense could do to Ole Miss quarterback Matt Corral what it had done to Mississippi State’s KJ Costello.

He took a moment to let what his colleagues were saying sink in, and then shouted: “What!?”

“Did y’all not see Ole Miss’ offense. Are you kidding? What are we doing?”

As Rutledge pointed out that Arkansas defensive coordinator Barry Odom could scheme something to slow down Ole Miss, Tebow almost yelled himself hoarse defying the mere chance that Arkansas could win.

.@JRodgers11 and @Harp41 picked Arkansas over Ole Miss and @TimTebow wasn’t having it ? #SECNation pic.twitter.com/3VxTzaCOZb

Tebow was the most high profile of a number of sports celebrities — including ESPN’s Kirk Herbstreit — who after the game had to eat crow for publicly shrugging off Arkansas’ ability to win.

Woods, meanwhile, was not the only Razorback to stiff arm Tebow’s congratulations to the program just hours after he laughed the Hogs off. Here are some fans who Tweeted back at Tebow alongside Woods:

Kameron: “Tim, you picked us to lose and even ridiculed your colleagues who picked Arkansas. Respectfully, we don’t want your congratulations. Have a great day!”

Mike Dentis: “We don’t want your congratulations. Think twice the next time you decide to laugh@ on national television and insult a team and it’s fan base.”

Sandy Patterson: “You can keep your congratulations. The way you literally had tears in your eyes laughing at the thought.”

HogFan745: “You don’t get to say congrats. Go congratulate that ELITE offense that just got stuffed.”

ARKANSASFBFAN: “If you’re in a magnanimous mood you might consider sending @dmcfadden20 his trophy”

Make sure to check out Woods’ breakdown of the Ole Miss win below. His description at 12:40 of the defender who tried to tackle Grant Morgan during the Pick 6 is hilarious:

Somehow, even after the Ole Miss game, disrespect still comes Arkansas’ way in the form of the latest Associated Press Top 25. The Hogs come in at the equivalent of No. 37, behind the likes of Coastal Carolina, Tulsa and Louisiana-Lafayette.

Arkansas should be 3-1 (though is technically 2-2), while playing the hardest schedule ever. Not getting more votes is laughable.

Here’s what college football firebrand RJ Young has to say about it in his latest rendition of an ongoing theme: “Rank Arkansas, you cowards!”

And here’s a satisfying sirloin steak of a breakdown of the Ole Miss-Arkansas game from the head Hog himself:

Finally (and thank you for making it this far), here’s our latest post: