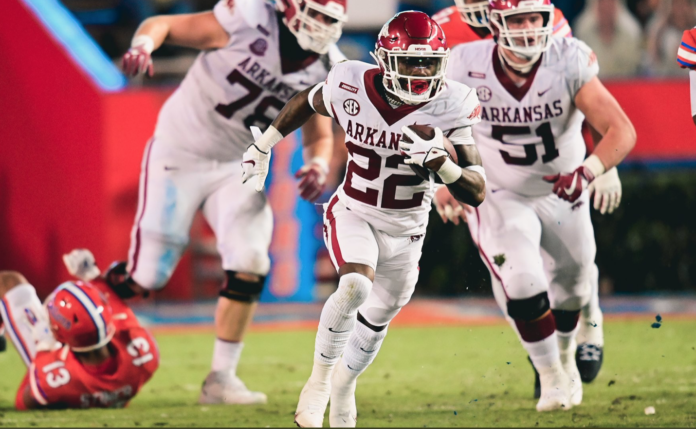 The nearly full head of steam that the Arkansas football program had built coming off of the Tennessee win has dissipated a bit. Two losses in a row, coupled with the postponement of this Saturday’s game at Missouri, will do that.

Still, even with the Hogs’ 3-5 record, there are enough positives within a big enough sample size to make a strong case for the program making a sizable jump in the win column next season.

It’s been nearly a decade since Arkansas football has posted a double-digit win season. You have to go back to the 2012 Cotton Bowl Classic, when the Bobby Petrino-led Razorbacks defeated Kansas State to improve to 11-2 overall.

Following that season, fans had dreams of even more success, but that subsided with the now-infamous motorcycle wreck that led to Petrino’s firing. Then came a roller coaster next eight seasons with some low peaks and even lower valleys, all leading to the hire of Sam Pittman, a former Arkansas assistant under Bret Bielema, as head coach.

While many in the national media were dismissive of Pittman’s hiring, he quickly won over fans by his authenticity, his sincerity and simply just wanting to be here. It’s now evident that Pittman also won over the players, most of whom he did not recruit. His former Razorback players like Detroit Lions lineman Frank Ragnow will be the first to tell you why.

“Coach Pittman is going to get the maximum out of every one of his players because his players are going to play their absolute heart out because they know how much their head coach cares for them, or in our instance, how much our O-line coach cared about us,” Ragnow told ESPN.

It comes as no surprise, then, that Pittman has already been able to win three SEC games in his first season. So, what does the next step look like for the Arkansas football program? In a recent ‘Pig Trail Nation’ episode, Arkansas analyst Mike Irwin shared his thoughts on what that looks like:

“I’m going to assume this would’ve been a normal schedule, they would have lost to Notre Dame, but won the other non-conference games,” Irwin said. “That’s an eight-win season, eight and four. Then maybe you go to a bowl game and win that, as many as nine games this year…. “If there’s a little bit of an improvement, you’re up to 10 wins maybe. That’s a tremendous turnaround in one year to the next. That’d be a two year overall turn around.”

Ten wins in 2021 is a realistic goal. To achieve that, Arkansas football must straighten out three key issues:

After watching Chad Morris’ revolving door of 8 different quarterbacks in his two seasons as head coach, Feleipe Franks has been a much-needed breath of fresh air. The grad transfer from Florida was sold on the chance to raise his stock for the NFL Draft while helping jumpstart the rebuild of the Razorback football program. He immediately gained the respect of his teammates and coaches, being named a captain for the 2020 season.

“Feleipe, man, he’s a hell of a quarterback,” said running back Trelon Smith earlier in the season. “I’ve never seen Feleipe in panic mode. He’s always the type of guy to come over on the sideline and motivate everybody to keep going, keep pushing, next play. He always tells us forget about the last play and move on to the next play. He’s a true leader on this football team.”

Through eight games this season, Franks has 155 completions in 228 passing attempts for a 68.3% completion rate, with 17 touchdowns and four interceptions. He ranks top five in the SEC in every statistical category. He is the type quarterback that Arkansas needs right now, and fans should want him to return.

Franks is beginning to generate buzz among NFL scouts, but how much that helps his position in next year’s NFL Draft remains to be seen. With the NCAA blanket waiver granting every student athlete an extra year of eligibility, Franks could come back to Arkansas next year.

If he doesn’t come back, the blanket waiver will cause lots of graduate transfers to enter the market. One of them, like Franks, may find Arkansas the perfect fit. If they choose to replace Franks “in-house” then freshman Malik Hornsby and redshirt freshman K.J. Jefferson will battle it out for the starting job. Jefferson got the nod in “mop up” duty late in the fourth quarter in the blowout loss to Florida. It could mean that he is the front-runner right now, but things can quickly change.

Both quarterbacks are dual threats who flourish in RPO situations, which is exactly what offensive coordinator Kendal Briles wants. However, neither has gotten many meaningful in-game reps this season. The added pressure of replacing someone like Franks could play a factor into whether or not they can build off the success that we have seen this year. If the next starting Arkansas quarterback can come close to the producing at the level Franks has, there will be no question the Hogs can win 10 games next season.

While at Arkansas from 2013-2015, Sam Pittman built one of the best and biggest offensive lines in the country and developed a reputation for being one of the best recruiters in the nation. After he left for Georgia, Arkansas’ offensive line regressed by a lot. But it’s no surprise that in just one year, Pittman has helped improve the current line to being a respectable unit.

The line’s growth curve has steepened in the last few weeks, after Pittman laid down a challenge to them prior to Texas A&M.

In the three games since then, the offensive line has proven up to the task, as Arkansas has averaged 209.3 yards rushing. However, they aren’t yet consistent enough across the board to compete with elite programs.

Take, for instance, the last offensive possession in the infamous Auburn game. One first down was enough to end the game, but Trelon Smith lost five yards on first down after there was nowhere to go. Two plays later Arkansas punts it away and the rest is history.

Elite teams know how to put these games away. While Arkansas’ isn’t there yet, it is clear the line has much potential. The entire offense took a step back against LSU, although the offensive line gets a small pass after missing key contributors Noah Gatlin and Beaux Limmer.

With a full offseason under Pittman and offensive line coach Brad Davis, Arkansas should have an offensive line more capable of competing with the “big boys” of the SEC in 2021.

Coming into this season, nobody would have guessed that the Razorback football team’s strength would be its defense. Under former defensive coordinator John Chavis, Arkansas had one of the worst defenses in all of football.

But new coordinator Barry Odom has turned the Hogs into one of the better defensive teams in the SEC in less than a full year. Until the last couple of games, the defensive line had been consistently pressuring quarterbacks. Expect more of that once the line gets all its starters and top backups back after most of them sat the LSU game due to COVID-19.

But the LSU game also highlighted how good Arkansas’ linebackers and corners have been at making tackles in the open field, while safeties — especially Jalen Catalon — rarely allow anything over the top.

The biggest key to Arkansas being able to win 9 or 10 games next season won’t come from players hitting the weights harder, studying playbooks more or doing extra drills in the offseason. It will come from Hunter Yurachek and the administration opening their checkbook to keep this defensive staff, most importantly Barry Odom, in Fayetteville.

In March of this year, the Arkansas Democrat-Gazette reported Odom was receiving interest from SEC schools which led to a raise from $1.2 million to $1.3 million annually. That was before Arkansas had awed the rest of the league with its stifling defense. Now, Odom is a household across the SEC and in athletic departments across the country.

What Barry Odom has done is remarkable, and you’ll be hard pressed to find a football analyst that disagrees. Arkansas is rarely going to be able to out-recruit Alabama, LSU or Texas A&M, so having an elite coordinator like Odom to provide schematic advantages and inject the necessary passion that’s needed to excel on defense is all the more important.

Pro wrestler Ric Flair coined the phrase “to be the man, you gotta beat the man.” In the SEC, that doesn’t always mean on the practice field or in the film room. Sometimes, it means beating your biggest rivals at the ATM.

For more on the Jalen Catalon ejection and Arkansas after the LSU loss, see this: