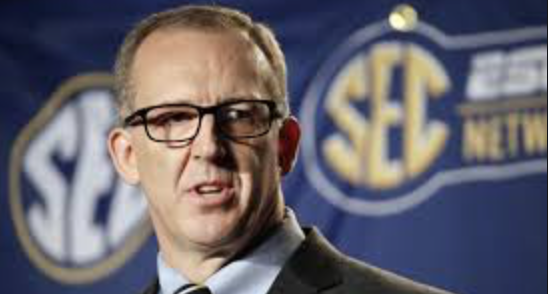 So, the Southeastern Conference, in its infinite wisdom, denied the University of Arkansas the “right” to determine where its spring games will be.

The SEC brass say they only allow member schools to play Red-White games off campus under “extenuating” circumstances (like when Donald W. Reynolds Stadium was being renovated in 2018).

Arkansas athletic honchos countered there were a few good reasons in our case:

SEC Commissioner Greg Sankey flat denied Arkansas’ request for a waiver. In response, the Razorback athletic department then released a statement that included: “As part of our ONE Razorback Initiative, our goal remains to engage fans throughout Arkansas and beyond.”

Arkansas athletic director Hunter Yurachek should be applauded for this initiative.  The powers that be in the SEC should be taken to the woodshed and whipped.  This is ridiculous.

Look, I’m over the stadium debate.  But, what I will say is that the university has taken it upon themselves to throw a bone to Central Arkansas (which kept the program alive until Walmart, Tyson and JB Hunt showed up) and Yurachek was moving it in the right direction to keep the Hog fanbase intact.

But let’s be clear here.  It’s not just about people in Little Rock that this affects.  What about the folks in Lake Village, Marianna, Texarkana or Hope who want to see the Hogs?  No question, it’s easier to get to Fayetteville now than it was when I attended school there decades ago, but it’s still a long drive for those who live anywhere South, East, or West of Little Rock.

Go ahead and throw in two nights in a hotel, food, gas and time to get there and you’ve got yourself an expensive weekend.

Saturday Down South reports that “there is a bright side to the SEC’s decision to deny the waiver.  With the spring game being held in Fayetteville, the Razorbacks are now allowed to host recruits and their families for the game.”

It makes no sense for the SEC/NCAA to forbid recruits from visiting at off-campus practice games.  I disagree with the premise, period.  What nefarious things could go on in Little Rock that wouldn’t go on in Fayetteville — during a scrimmage of all things?

What recruiting violations could occur just because we’ve moved the game from Fayetteville to Little Rock, which may cross some imaginary line that some organization (like the SEC or the NCAA) thinks is real?

Arkansas is one of the last, if not THE last, programs to play in a different “in-state” venue than on campus.  The main reason? Geography, pure and simple.

I’ve got one question.  Why does the NCAA, SEC, or whoever, (who cares) think it’s okay for teams to travel to the Dallas area to play in the Jerry Dome every year, but it’s not okay to play a freaking intra-squad game in the state capitol of the state’s flagship university?

If anybody has an answer for that other than, “it’s about the money,” I’d love to hear it.

The University of Arkansas is doing the right thing by trying to engage the entire state in the Hog program.  And, it irks the Hell out of me that some arrogant and self-important organization is standing in our way.

That’s my story and I’m sticking with it.  And, in my humble opinion……..I’m right.

Want more insight into this controversy? Hear what Hogs insider Mike Irwin has to say: