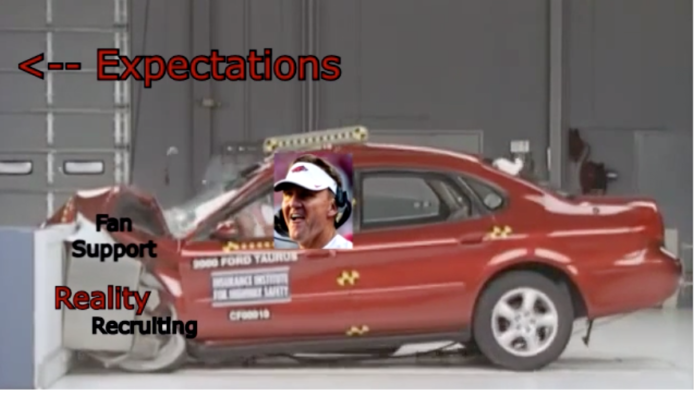 Arkansas was destroyed by Auburn on Saturday, losing 51-10 at home.

Going into the game, hardly anybody thought the Hogs would win. But some insiders felt like they would cover with the spread at 19.5, which was seen even on the Asian betting sites, as presented on BettingTop10.

It was just really, really bad all around. Arkansas’ biggest strength, former SEC rushing leader Rakeem Boyd, eked out only 39 yards on 13 carries. Ben Hicks threw for 182 yards and a QB rating of 91.3 which, sadly, is higher than what the Hogs quarterbacks produced in a few earlier games this season.

“The thing that is probably more impressive is the depth they have, especially on the defensive side of the ball,” Chad Morris said afterward. “They have great speed, I think their defensive front, like I’ve said all week long is as good as I’ve been against. They’re able to rotate in and keep guys fresh.”

It didn’t matter that this was Auburn’s first game without starting running back JaTarvious Whitlow (lost to injury). The Tigers still unleashed a torrent of elite yard churners in his stead, racking up 298 yards on the ground.

Now the Hogs have a 2-5 record, which includes losses in highly winnable games against San Jose State, Texas A&M and Kentucky. This is pretty depressing for most fans.

Looks like these doldrums are pretty inspiring for some fans, too. Out of this darkness has arisen some of the greatest meme work in Arkansas sports history.

Sit back and enjoy the below. Because even when the cheering goes away, we can still have our laugher.

From John L. Smith, to Bret Bielema to now Chad Morris, it seems like each recent head football on the Hill has been chewed up and spit out since Bobby Petrino’s crash.

No matter what they try, they just don’t seem to have that “It” factor.

After the Auburn loss, Arkansas has lost 15 SEC games in a row dating back to Bret Bielema’s last season in 2017. That’s just two losses away from the record — 17 games from John L. Smith’s 2012 season through 2014, Bielema’s second season.

It’s been a bad, bad run* here, folks. And it could get worse. Arkansas’ best chance at an SEC win is against Mississippi State, but losing that one could mean entering the 2020 season with a 19-game SEC losing streak.

Oh well. At least some Hog fans won’t have to work too hard coming up with a good Halloween yard decoration.

Arkansas has been pretty equal opportunity when it comes to losing on the road versus at home. Only 54,619 fans attended the Auburn loss.

” Since the stadium expansion in 2001, Arkansas has had eight crowds under 60,000 in Fayetteville,” Andrew Hutchinson reported. “Five of those games have occurred in the Hogs’ last seven home dates.”

“Beat Someone. Anyone. Please.“

Ok, this one isn’t technically a meme.

It’s just a sign, put up by the big-time Razorback supporters at Patrick’s Burgers in Springdale. In so many ways it’s a sign of the times.

Live View of the Arkansas Football Program from r/razorbacks

This one sure takes it out on Chad Morris.

The jury’s still out on how much the Hogs’ struggles are due to the mess Morris inherited in December 2017 and the youth of the team (especially on defense), versus his inability to coach well on the college level.

What is clear is that in his system the quarterback is vitally important, and he has not been able to inspire greatness in any of the quarterbacks at Arkansas as he did at previous stops at Clemson and SMU. Starkel, for instance, still shows footwork and timing issues that for some reason haven’t yet been corrected in years as a Division I quarterback.

The sad part here is even if Starkel does significantly improve in the next game, his numbers will still look pedestrian against a defense as strong as Alabama’s. Just as was the case in the Auburn loss.

More and more, it seems like keeping the faith as a Hogs football fan can feel like banging your head against a brick wall.

If anything, these images show at least you’re not alone.

Know of some hurts-so-good memes I forgot? Post them in the comments or on our Facebook page.

Here are some extras that fans have sent in:

For All You GoT Nerds (of which I’m one)

Also, below is my most recent machisistic post about the most memorable thing to happen during the Auburn game: