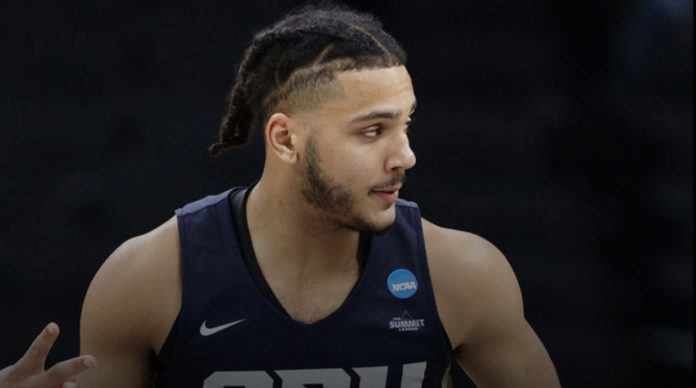 On Friday, Kevin Obanor, the best outside shooting big man in college basketball, announced he has chosen Texas Tech over Arkansas as his transfer destination.

Obanor, of course, is a grown man who best knows his own particular situation. Still, from the outside, it looks like the 23-year-old made a mistake in choosing the Texas Tech basketball program.

This isn’t meant to disparage Texas Tech. The Red Raiders are far from a bad program.

Under its former head coach Chris Beard, it sometimes flirted with borderline great status. It also has a new assistant coach in Talvin Hester who was Kevin Obanor’s lead recruiter at Oral Roberts.

So, yes, specific relationships matter. But so does the bigger picture.

And when it comes to the bigger picture of what the Arkansas basketball program can do for Obanor in 2021-22 and beyond, on the surface the scales tilted in Arkansas’ favor.

Here are the top reasons why Arkansas would have been a better fit for Obanor than Texas Tech:

Musselman doesn’t know Obanor as well as Hester, but the two do have a prior relationship.

“I was recruited by Musselman, so we had a pretty solid relationship,” Obanor said before Oral Roberts played Arkansas in the 2021 NCAA Tournament.

“And things didn’t play out, but it’s all God’s plan.”

More importantly, Musselman is the more seasoned head coach, someone who is far surer thing in his ability to develop Obanor than new Texas Tech head coach Mark Adams.

He also has plenty of NBA experience, as well as a staff filled with assistants with NBA bonafides.

Mark Adams hasn’t been a head coach at the Division I level since 1997 and has zero NBA experience.

Sure, Adams could turn out to be great, but Musselman is by far the more sure thing when it shoring up his weaknesses. Obanor just has one college season left to give himself the best shot possible at the NBA.

Arkansas basketball’s arena is on the short list of greatest home court atmospheres in the game. When it gets rocking and rolling, it ranks right up there with the best of the best — and often gets louder.

Obanor only got a glimpse of that atmosphere when he played against the Hogs last winter thanks to COVID-19 restrictions, but he should get the full treatment when playing in front of 20,000+ roaring fans through much of 2021-2022.

Texas Tech basketball players, meanwhile, play in something called the United Supermarkets Arena. Capacity: 15,000 or so.

This disparity reflects the gap in prestige between the two programs.

Even when looking at only the last 10 years, Texas Tech basketball’s overall record is 177-148.

Obviously, Obanor will want to get plenty of playing time wherever he goes.

It will be a bit tougher to break into big minutes on Red Raiders because it looks like they already have two starting bigs in the the returning Marcus Santos-Silva and UTEP transfer Bryson Williams.

On top of that, Texas Tech has 7-foot Arizona transfer Daniel Batcho.

Arkansas, meanwhile, was likely going to play small-ball lineups including one with Jaylin Williams as the lone starting big and Toney and Umude as forwards.

But Obanor projects to slide into the starting lineup to give Arkansas a more traditional frontline. Likely either Toney or Umude would come off the bench as a result.

At Arkansas, Kevin Obanor has a more direct path to big minutes and a better shot at winning a national title.

Nobody on either team is as devastating a shooter as Obanor’s former ORU teammate Max Abmas, but Arkansas offers the closest approximation.

Is this even an argument?

On one hand, a dried-out topographical nightmare of a place and on the other, one of the best areas to live in the nation?

Yes, former Arkansas basketball assistant Corey Williams left Fayetteville for Lubbock, but he did so to get a better shot at head coaching one day. Obanor is looking ahead to prepping for pro ball, and in his case Fayetteville — not Lubbock — makes more sense.

If Obanor has any doubts about Fayetteville, he can always talk to Lee Mayberry, the former Arkansas basketball great who now coaches women at Oral Roberts.

Plus, though Kevin Obanor is native Texan, he is from Houston. That’s nearly as long of drive (8 hours, 15 minutes) to Lubbock as it is to Fayetteville.

There are few more beautiful places to spend a final year in college.

Arkansas is still heading into the 2021-2022 season as a Top 12 team in most preseason polls after an already successful offseason getting transfers like Stanley Umude, Chris Lykes, Au’diese Toney and Trey Wade.

But inking Kevin Obanor would have almost certainly pushed the Razorbacks into the Top 5 in most polls and make Arkansas a regular pick to make the 2022 Final Four.

That just scratches the surface of how good he is on offense, as the below efficiency stats show:

He’ll do well on almost any modern college basketball team, including Texas Tech.

But he could have maximized his last season in college by choosing the Arkansas basketball program.