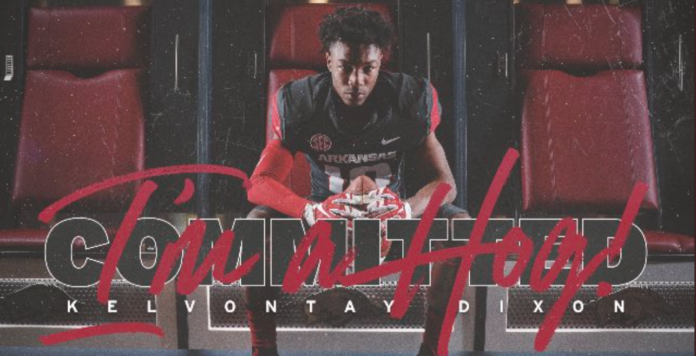 Chad Morris’ high-octane offense should become even more explosive with today’s commitment of Kelvontay Dixon, a receiver/running back from Texas who has run a 10.81 in the 100 meter dash.

Dixon, 6-0, 180 pounds, racked up 15.3 yards per catch last season for Carthage High and was pursued by the Texas Longhorns. Through the spring, it seems like the Longhorns had a great shot at getting the three-star standout. The Longhorns, after all, got his older brother, running back Keaontay Ingram.

In the end, though, he decided on Arkansas in part because of its upward trending football program. “I feel good about the staff and them turning things around,” Dixon told Rivals.com. “I believe it will get better and better.”

He added the UA “felt like home” on his visits and would continue to feel that way when playing with one of his high school teammates, Ty’kieast Crawford. Ever since Crawford committed in late April, the four-star offensive lineman had been recruiting Dixon. “After he committed, he facetimed me and told me to come join him,” Kelvontay Dixon said. “I’m very excited to play with Ty’Kieast in college.”

He shows great elusiveness as a runner, though he tends to run too high at times. Meanwhile, “his route running looks a little raw, with limited exposure to the entire route tree, but he is able to gain separation using his explosiveness and speed,” Hogs beat reporter Nikki Chavanelle notes. He does a good job of dropping his weight going into his breaks and shows some explosiveness coming out of it.”

“Dixon’s body control is one of his better assets, which should assist him in becoming a more polished route runner in time,” Chavanelle adds. “He is fairly efficient and controlled in his movements, although he is prone to false stepping at the line of scrimmage and using too many steps to break down at the top of his route at times. He appears to possess good hands, although there are times he double clutches or lets the ball get to his body rather than catching it extended.”

Some of this rawness if a result of an ankle injury that wiped out most of Dixon’s sophomore season. Last year, as a junior, he came back with a vengeance. Dixon caught 84 passes for 1,288 yards and 17 touchdowns (15.3 yards per catch) while used mostly as a receiver. That helped Carthage finish with a 14-1 record and Texas Class 4A Division I state semifinal berth.

He also competes in high school baseball and track and field. At the Texas Class 4A state track and field championships he competed in four events. Dixon finished second in the triple jump and sixth in the 100 meters.

Kelvontay Dixon is the 11th commit of the Razorback football’s class of 2020. He is the 8th commit from the state of Texas, where Hogs head coach Chad Morris spent decades making connections.

So far, Crawford and Morris are the only four-star commits based on 247Sports. The numbers after the height/weight reflect the 247 Sports composite ratings: