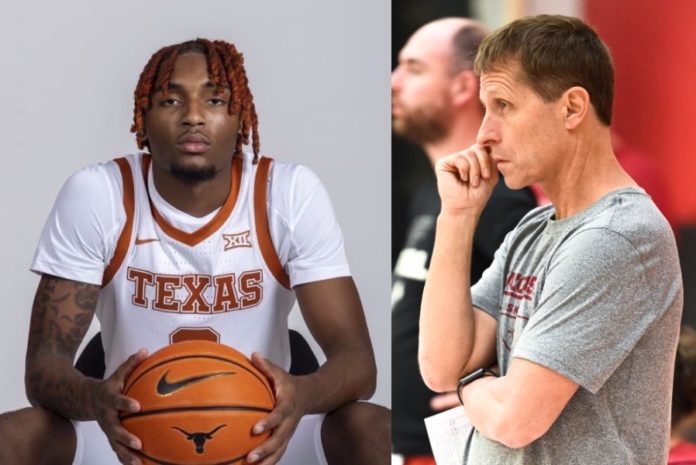 Greetings, Arkansas basketball fans; you probably don’t know who I am, but your fearless leader Evin learned about my existence this week and – much like the videotape in The Ring – he’s passing knowledge of me onto you before his family perishes from some sort of woman in a well. (Full disclosure: I have not seen The Ring.)

My name is Jonny and I go by BitterWhiteGuy (it’s a long story) on various social media platforms. I’ve been writing about Texas basketball for the better part of a decade, and bring you insight from the enemy camp, in the form of someone who has been watching Texas basketball since the Tom Penders years. That means that I’ve been on the full rollercoaster ride from irrelevance to a Final Four to whatever the last decade has been.

All that to say I should have relished Arkansas getting demolished in Austin in Saturday’s exhibition. If you had come to me six months ago and said “Texas is going to push the pace, take advantage of their athleticism, and beat the Razorbacks by 30,” I would first ask why someone came back from the future to tell me this and not, like, what stocks to buy or if Elon Musk has bought every social media app as a joke or whatever. Then, I would ask if you were sent to me as some sort of angel, entrusted with a message that would delight me very specifically.

Short of telling me that Oliver Miller was convicted of a Ponzi scheme involving fake Dunkin Donuts franchises, this initially comes off as some of the best Longhorns-related news I could receive.

I did want to enjoy what I saw on Saturday streaming off some random Razorback fan’s cell phone (which meant that thanks to cell phone bandwidth limitations each player on the screen was approximately six pixels).  I saw what I’ve been screaming for the last decade or so, only sporadically receiving and only long enough to get my nascent hopes crushed by, I don’t know, let’s say Abilene ****ing Christian.

The defense was mostly stifling; the offense was moving around at a pace significantly faster than last year, which is an admittedly low bar given Texas basketball coach Chris Beard’s adjusted tempo was nearly the bottom of D-I.

The Problem with Arterio Morris and Texas Basketball

So, why didn’t I enjoy it? Arterio Morris is why. Not because he did anything wrong on the court, where he led the Longhorns in scoring, but because he’s doing a lot wrong off the court. Morris, you see, was arrested and charged with assault in June; he dragged his ex-girlfriend out of her bed and tried to literally drag her out of her apartment.

This is in addition to the litany of threatening texts he sent her, as well as a video he sent her where he was threatening her with a gun. (You can read more about it, including the arrest report and screenshots of some of the texts, in my season preview piece.) This isn’t getting talked about much in Austin because the local beat reporters aren’t pressing Beard and/or the Texas administration on it to date, but it’s pretty alarming and there’s more than enough evidence to merit at the very least an indefinite suspension. It’s gross, and Beard is ducking any mention of it.

The reason why Beard is ducking the situation was evident Saturday; Morris was raining threes and providing a major offensive spark to a team that needs perimeter shooting in the worst way. Beard wants wins, and he doesn’t seem to care who provides them. (I give other examples of Beard not giving a damn about domestic violence issues during his Texas Tech tenure in the aforementioned season preview, if you’re interested.)

It’s not as if this kind of dynamic is foreign to Razorback sports fans, however. Consider former defensive end Tre Williams, whom Barry Odom brought in as a transfer from Mizzou last summer. At Missouri, Williams had been arrested on suspicion for second-degree assault of his girlfriend and got himself involved in a halftime brawl, yet absolutely stayed on the team. And Odom rolled the dice in bringing him to Arkansas, too.

Anyway, Arkansas basketball folks, I would wish you well the rest of the season, but I don’t think you would believe it…and you shouldn’t. I went through puberty while Arkansas won national titles, that’s a double-hell nobody this side of Texarkana deserves. (Well, maybe Greg Abbott.)

My formative college basketball years coincided with Arkansas unleashing mental catastrophe after mental catastrophe on my teenage psyche, as Texas continually came up short against Strollin’ Nolan’s high-level teams. If you don’t think I remember Texas’ vaunted BMW offense getting t-boned by Arkansas in the Elite Eight, brother do I ever.

Also, I donate to local charities and volunteer at a food bank, so I think I’ve at least earned some conscience-free basketball enjoyment. Sliding Arterio Morris up out of the literal and metaphorical paint would do wonders in that regard.

Finally, I don’t know who needs to hear this, but I’ve tried to shoot free throws from where Oliver Miller shot them. That’s some medieval sorcery I still to this day do not comprehend.

Regarded as the top point guard in the 2022 class, Morris burst onto the national scene three years ago as a supremely athletic rim-rattler in the mold of Ja Morant/Victor Oladipo who once told Ball Is Life that on the court “my mentality is to kill.” Musselman, of course, saw that up close and personal: “I thought Morris was outstanding, his ability to rise over people from the 3-point line,” he said. “Really, really impressed with Morris in the minutes that he played.”

Last summer, 247Sports’ Brandon Jenkins was similarly impressed with the Dallas product: “Morris has pop to his game and is elusive with his handle when breaking down defenders,” Jenkins wrote. “His short-area quickness and burst coupled with his shiftiness grant him the ability to get where ever he pleases in the half-court game. He is at his best when playing downhill where he is an instinctual player when finishing creatively at the rim. Thanks to his length, quickness, and size, Morris can also be leaned upon as a multi-positional defender.”