Search
Home Arkansas Football Perspective What Did the Titans’ Treylon Burks Ever Do to NBC to Deserve... 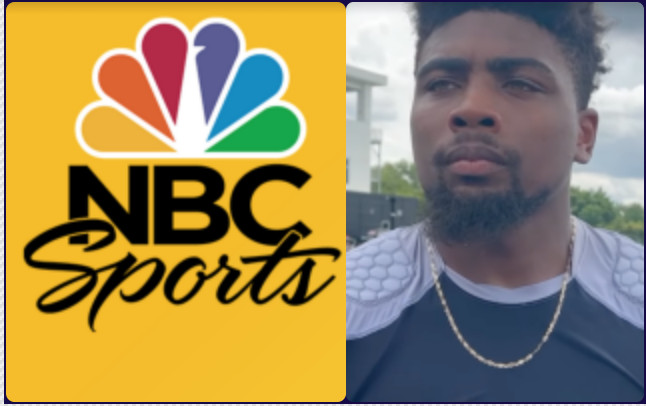 Treylon Burks is, by pretty much all accounts, a nice guy. Just a big, nice guy who happens to love the sport of football and the outdoors more than most people.

The same applies to Sam Pittman, his college football coach.

Somehow, in the last couple weeks, two of the most beloved people in the world of Arkansas football have had to endure far more public criticism than they deserve because as a rookie Burks didn’t descend onto the Tennessee Titans’ practice fields at Saint Thomas Sports Park in Nashville as the perfectly formed second coming of Calvin Johnson.

First, of course, was Burks’ asthma slowing him down for a while during the summer. That led to an attack by a Titans writer who accused Sam Pittman of purposefully misleading the Titans’ GM. The SB Nation writer built his logic on a grand total of one previous situation, this one involving a Titan Pittman had coached in college (at Georgia) who had a terrible rookie season.

Then Treylon Burks started doing awesome one-handed things in practice, just as he had as a Razorback while making a claim as perhaps the best receiver in Arkansas football history, and the negative chatter mostly died down. People remembered why he was considered a favorite to win the below award:

2022 Odds to Win NFL Offensive Rookie of the Year

Everything seemed to be back to going more or less to plan, even if the first-rounder has been quieter in recent practices and does occasionally drop a pass here and there.

It appeared NFL writers were back to being reasonable. Until today.

Fantasy sports is big business, especially when it involves pro football. To the point where entire news wires are dedicated to the providing information for fantasy sports players. Apparently, some of the sportswriters involved in this trade are so smitten with the idea of fantasy they are applying it directly to their craft, and simply making things up out of nearly thin air.

That looks to be the case when it comes to what NBC’s NFL fantasy sports feed published about Treylon Burks on Monday. NBC SportsEdge noted that Burks has been practicing with the second and third-stringers and “has gotten off to a bumpy start in his first NFL offseason, battling conditioning issues in the spring and now lining up wrong and not running through his routes.”

The smearing continues: “He’s been repping with the Logan Woodside and Malik Willis units, while Robert Woods, Nick Westbrook-Ihkine, and fellow rookie slot man Kyle Philips have mainly been repping with Ryan Tannehill’s group. Burks is supposed to be the Titans’ replacement for A.J. Brown, but he’s got a long way to go. Of course, things can change quickly, and Burks’ talent can vault him up the depth chart fast, but he’s looking a bit risky at his current average draft position as a fantasy WR3.”

Whoever wrote these nuggets also provides sources. In this case, it’s Tennessee Titans columnist Mike Herndon, who earlier on Monday had Tweeted the following from the Titans’ practice field: “Burks is still working through some rookie learning curve himself. Was lined up wrong and had to be corrected by Woodside during one team period. Had another rep where Rob Moore got on him for not running through the route.”

But Herndon also added: “Treylon Burks is huge and does a good job using that size to his advantage. Made a spectacular leaping contested catch on a ball from Malik Willis down the left sideline, but Tre Avery did a nice job of forcing him out of bounds before he could tap his second foot.”

When it became apparent that wannabe sports influencers and brain-impaired fantasy sportswriters were taking his comments out of context, Herndon made sure to follow up with this clarification:

It doesn’t matter to NBC, however. The “report” remains published on NBC SportsEdge.

OK, so the NBC writer who enjoys drinking on the job didn’t get everything wrong. It’s true that Burks was listed as a second-teamer on the Titans’ unofficial depth chart behind Robert Woods and Nick Westbrook-Ikhine. Still, that’s not some kind of huge red flag. As RotoWire puts it: “It’s not uncommon for teams to list first-year players conservatively on preseason depth charts, but it is a reminder that Burks — the No. 18 overall pick in the 2022 NFL Draft — will have to earn his projected early-season role opposite Woods.”

At the end of Monday’s practice, Mike Herndon sees Burks as a major contributor in the wide receiver rotation. “Titans passing attack will feature some combination of Woods, Burks, [Nick Westbrook-Ikhine], and Philips (maybe a dash of McMath),” he Tweeted. “Would guess Woods/NWI gets the first snaps in 12/21 personnel as things stand today, but Burks will have a package that he’s asked to master. Philips [on] mostly 3rd downs.”

Treylon Burks recently spoke to the media after a Tennessee Titans practice. Below are some excerpts from his interview:

On working more on the corners than in the slot like in college: “I would just say it’s different. It’s just working every day in practice, getting the routes down. It’s just getting me better and better at stuff.”

On developing chemistry with quarterback Ryan Tannehill: “I think that’s the main thing, honestly, just being out here, being able to catch balls with him, let him get a feel of how I run routes and when I’ll be open. And also getting the timing down from him, for me and being out here and bonding.“

On starting practice by going one on one with talented cornerback Roger McCreary with the whole team watching: “That’s just the standard here, the best of the best. We all going to compete against each other and we’re going to hold each other accountable and go compete.”

“…just keep pushing each and every day. Everybody has a spot where they need to get better at and I’ll just keep going each day.”

See the latest from Treylon Burks at a Titans practice here:

More from BoAS writer Andrew Hutchinson on the Titans and Treylon Burks here: