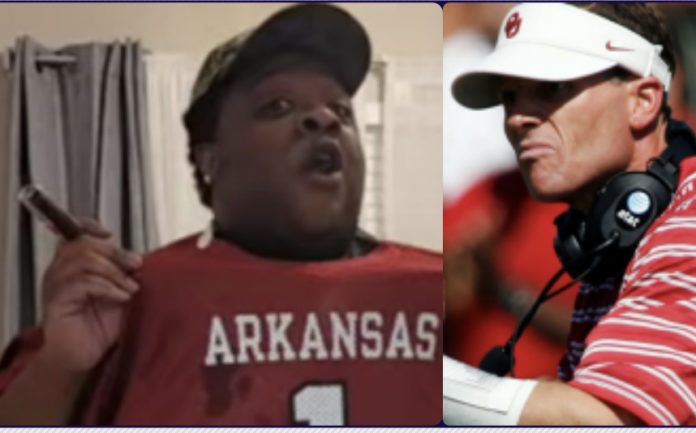 Some Oklahoma football fans will use that excuse for getting ambushed in the Cotton Bowl on Saturday, while Arkansas fans are left with a problem with the Sooners being on the bottom side of a 49-0 loss because the perpetuator was the Longhorns.

That causes a bigger problem.

A lot of the Razorback faithful were hoping the entire Texas football program was done. They dislike the Sooners, but absolutely have a hatred for the Longhorns.

It was an interesting point from Mac Engel at the Fort Worth Star-Telegram right after the game where the Sooners weren’t even embarrassed like this during the John Blake years when current Arkansas football coach Sam Pittman was on the staff.

Oklahoma football coach Brent Venables, after all, was expected to be the savior after Lincoln Riley’s abrupt exit to Southern California and a host of players bailed out of Norman, too. That includes Arkansas wide receiver Jadon Haselwood, who has put together a few decent games and is the Razorbacks’ No. 1 wideout by more than 100 receiving yards.

Now the Sooners are mired in their first three-game losing streak since 1998. That’s happened to Arkansas every season since 2016, but still, those streaks aren’t fun for anyone. In Oklahoma, they are practically unheard of.

With the imminent expansion of the SEC, Razorback fans are going to be facing OU every year no later than 2025.

They have thought for years Texas is a bunch of loud, arrogant, obnoxious millionaires who try to bully their way through college sports and cheat like crazy, but never get caught.

The Sooners, on the other hand for many Hog fans, are viewed as loud, arrogant, obnoxious jerks who win championships because they don’t play anybody and aren’t particularly bothered when they get caught cheating. Or never got caught, for that matter.

Former Oklahoma football coach Barry Switzer, also a former Razorback, told USA TODAY Sports in 2014 that he had “a cozy relationship with the local sheriff and other officials” to prevent embarrassing incidents involving his players out of the newspapers and out of the public eye during the 1970s and 1980s.

“I’d have local county people call me and say, ‘One of your guys is drunk and got in a fight and is jail down here.’ And I’d go down and get him out. Or I’d send an assistant coach down to get his ass out,” Switzer added. “The sheriff was a friend of the program.”

Still vibing off the way Arkansas curb-stomped Texas last year, Hog fans can’t wait for Texas and Oklahoma to join the party. Many are making the same mistake they made over a decade ago when Missouri and Texas A&M came into the league and on the Arkansas schedule every year.

The Tigers took a year, then won back-to-back SEC East titles. They beat the Hogs in six of the first seven rivalry games. The Aggies beat Alabama and Johnny Manziel won the Heisman Trophy in their initial season in the league. While A&M has never made it to Atlanta, they have made the Missouri series look like a walk in the park for Arkansas by comparison.

If Arkansas has to play both of those schools in a couple of years, they will become the most-hated rivals on the schedule in two years. History and geography will pretty much guarantee that.

OU has problems all over the place, depending on which source you want to believe. The number of people who know exactly what’s going on is fairly small and usually don’t talk for the record.

All the noise comes from people who don’t really know.

Still, a lot of Hog fans loved the Sooners getting whitewashed at the Cotton Bowl on Saturday – even if they weren’t particularly happy it was by the Longhorns.

Arkansas has a bigger issue that should concern the fans more, sitting at 3-3 with a beat-up team and hitting the road this week to play a BYU team that came close against Notre Dame in Las Vegas.