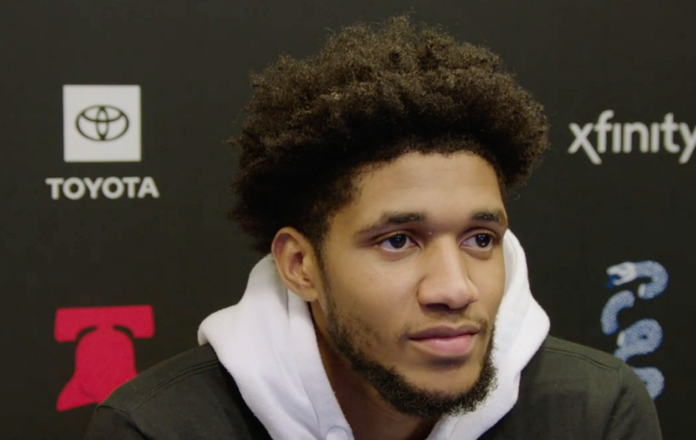 Unlike second rounders in previous years, Isaiah Joe didn’t have the benefit of a summer league this year to get his feet wet.

Nor did the willowy sharpshooter from Arkansas get much prepping on what it would be like to get thrown to the wolves early in his first season in the NBA. Heading into a COVID-19 season unlike any other, the only thing he could predict with confidence was that on any given night there’s a chance half his team could be sidelined by coronavirus protocol.

The 21-year-old knew he needed to be ready for whatever craziness this season had in store for him.

And last weekend he was.

With the 76ers down to just seven players against Denver, Joe earned the first start of his NBA career, totaling 45 minutes after totaling only 28 in the previous four. He shot extremely well in the first quarter, but couldn’t find paydirt down the stretch, finishing three of 11 on three-point attempts.

“Today was about getting the rhythm of the game, learning as much as possible,” he said afterward, according to USA Today. “I think a lot of players definitely look forward to playing as many minutes that they can get, especially in times like today when we’re players down and the team is relying on you to hold up your end.”

Philly lost that game by 12 points, but head coach Doc Rivers also said all the right things: “Even though they believe it, I think they need verification sometimes that they are NBA players. Some of these guys, and you can see it as it went on, Isaiah Joe. I think he’s gonna be a terrific player and you can see him settling down, getting his legs.”

Despite his 4-for-18 shooting performance and four rebounds and single steal, most onlookers would give Joe the benefit of the doubt here. After all, he’s young, raw, and no longer playing against the SEC competition he torched in 2018-2019 to set the Razorbacks’ all-time record for three-pointers in one season.

But the folks at RotoWire, apparently, didn’t care about any of that.

“Joe was handed a chance of a lifetime and extremely underperformed in the loss Saturday. The rookie guard was handed as many minutes as possible after a plethora of injuries and COVID protocols swung through the locker-room prior to tip-off.”

“However, Joe went a subpar 24 percent from the floor and did not add much else to his underwhelming performance. Joe might be waiting awhile before he gets another chance like this and will not be a viable option.”

Will not be a viable option.

That kind of talk can light a fire under a young man.

Joe has bounced back from his rough debut in a big way. In the two games following that loss, Joe has played even better, shooting more than 50% in all while contributing across the board without turning the ball over much.

Against Miami on Tuesday night, Joe came through especially big down the stretch when Rivers went with him over star Ben Simmons. Joe’s biggest moment came with 22 seconds left in the game and the 76ers down by five points. As you can see at the 1:27 mark below, he pulled up from about 27 feet away over the outstretched arms of the 6’11” Kelly Olynyk and buried a crucial three-pointer to keep Philadelphia in the game.

Although Joe has a lot of work to do on the defensive end, he’s improving there as well. He’s learning to stay in front of quicker guards and showed some chops during overtime by stripping Precious Achiuwa down low. Unfortunately, he’s still prone to bone-headed mistakes like playing Miami long-range specialist Duncan Robinson much too close and getting called for a foul.

Granted, the replay shows he didn’t actually foul Robinson, but Joe shouldn’t have been that close in the first place. Fortunately, the mistake didn’t cost Philly the game.

Joe’s emergence in the last couple games has quieted the RotoWire critics. It’s also been eye-opening for some Philadelphia fans who didn’t follow him closely at Arkansas.

“He showed me something. He showed me that he belongs,” said Keith Pompey, the Philadelphia Inquirer’s 76ers beat writer, on the “Locked on 76ers” podcast. “He didn’t have a summer league. He didn’t have a real long training camp. He wasn’t able to get into the gym and work out with guys for months and pick up games. So at this stage of his career, do you see Doc Rivers drawing up plays for Isaiah Joe? No, probably not in normal circumstances. But he looked like someone that down the road can be good for you.”

Joe left Arkansas after only two seasons because he believed he was ready to not only make an NBA roster, but contribute. In the run up to the November draft, he became a darling of some NBA draft analysts who believed he could be the next Joe Harris.

Then he fell in NBA draft mocks, likely due to five main weaknesses in college. Then, after a rough start to this season to this season, his performance had some folks thinking Joe was chump change.

Thinking that it would be a long shot before he made big contributions to this 76ers squad.

Yes, it’s early still, but Isaiah Joe appears to be a much more viable option than many expected.

What exactly happened with the 76ers and coronavairus?

The situation changes day-to-day but here’s where it stood heading into the Miami game, according to beat writer Keith Pompey:

“One has the COVID, the other four are in COVID protocols. Seth Curry has COVID. Tobias Harris is out. Shake Milton’s out. Matisse Thybulle’s out and then Vincent Poirier is out because they sat at a table at a team meeting with Seth Curry. I mean, they socially distanced a little in the table, but they are out because they were close by.”

Pompey adds that there is no cognitive dissonance in what the NBA allows and doesn’t allow when it comes to contact with someone who tests positive.

“If that person found out they have COVID and you played against them, you were guarding them, he was boxing you out, y’all collided, you don’t have to quarantine.”

“But if you were at a table with them or if after the game you had a conversation with them, oh yeah, you got to sit out.”