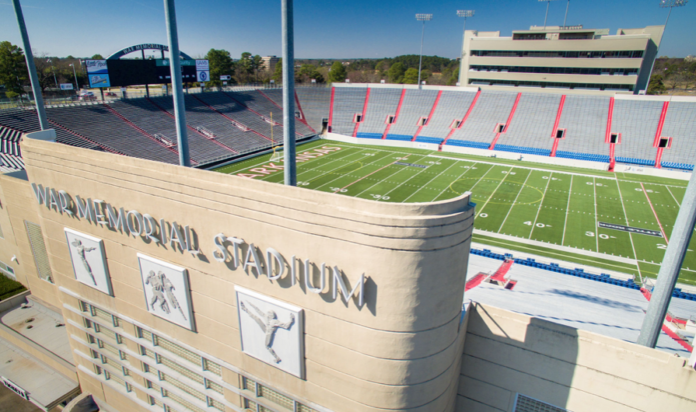 In the wake of the SEC’s decision to deny Arkansas the right to play our Red/White game in Little Rock, sports columnist Wally Hall made a decent case that we should start playing Arkansas State every year.

Former Razorback athletic directors John Barnhill and Frank Broyles are the main reasons for the fact that the Hogs have never played the team now known as the Red Wolves.  Broyles didn’t want to raise A-State’s profile in the state and, as the top dog in Fayetteville for so many years, he was in a position to stop it from happening.  Few will deny that he earned the right to stand in the way.  I know I won’t.

He, like most Hog fans, believed that Arkansas has nothing to gain from playing A-State and if they started beating us we might lose recruits to them. Most decades, this probably wouldn’t happen but the last few years have been abnormal, with A-State near an all-time high while the Hogs are at their lowest point in program history.

Given Arkansas State players (like Jerry Jacobs) are now transferring to the Hill, it’s possible that, yes, the Hogs might have lost a recruit or two to A-State in the last few years.

But, in the words of Bob Dylan, “The times they are a changing.”  Hunter Yurachek, the current Razorback athletic director, is more open to playing A-State than any of his predecessors.

He’s said and done all the right things to try to keep central Arkansas in the loop, but the SEC’s preventing of a red-white game in Little Rock hurts here. So does the fact the Hogs won’t again play in the state’s capital city until 2021.

So, Wally thinks the cure for this eventual alienation of all points South and East of Central Arkansas is simple: An annual season opener in which the Hogs to play the Red Wolves at War Memorial Stadium.  This is not really an original thought.  It’s been kicked around for years.

—It would be a sellout every year

—It would generate a lot of commerce for Little Rock

—It would be a true rivalry

The more we weight the positives of an Arkansas vs. A-State game in Little Rock, the more it seems this is an idea whose time has come.

Yes, there will be people who are vehemently opposed.  The Arkansas Legislature will probably try to stop it while they should be working on other things.  And, there will be those who say that Arkansas has nothing to gain.

Still, contrary to popular opinion, this will not split the state in half.  Nor will it be a signal that the end of times are near.  And no, the ghost of Frank Broyles will not charge into War Memorial Stadium riding Big Red and try to shut it all down.

What it will be is an opportunity to see the Hogs in Little Rock every year to kick off the football season.  And, you know what?  Even those who are vehemently opposed now will thaw enough to attend the game and see what all the fuss about.

Read the latest from Tommy Foltz below: