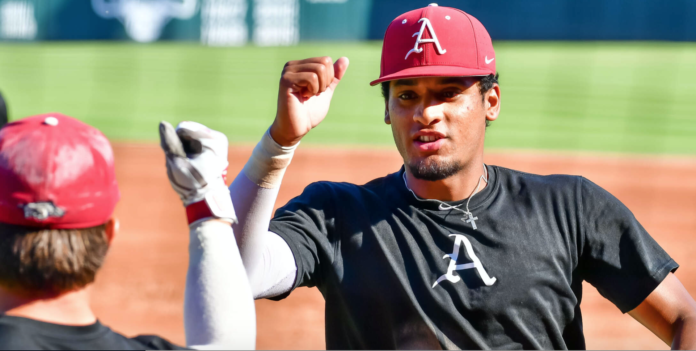 Year after year, the Arkansas Razorbacks baseball team recruits some of the highest rated classes in the nation. Eventually, all that talent plus elite coaching and facilities should be enough for the program to capture what has been an elusive first national title.

If these hungry 2021 Razorbacks are the ones to finally break though, Jalen Battles will be in the middle of it all.

Battles is a junior shortstop out of San Antonio, Texas, where he showed out as a first-team all-district baseball and football player at James Madison High School. He then attended McLennan Community College in Waco, Texas, where he played for Mitch Thompson, the brother of the Razorbacks’ hitting coach Nate Thompson.

In 2019, as a freshman at McLennan, Battles hit for an impressive .320 average and swatted six home runs while driving home 42 RBIs. He also used his speed to steal six bases and leg out 17 doubles and four triples over the 57-game season, where he didn’t miss a game.

Battles was named to the second-team all-conference and was a NJCAA Academic Team of the Year Honorable Mention.

Battles proved he can hit for a good average in the JUCO ranks. He has good speed and decent — but not great — power at the plate.

The question is if his bat will translate to the SEC. He is a smooth defender at shortstop and would create a very good defensive middle infield with returning second baseman Robert Moore. But Battles’ bat may keep him off the field.

Working on that part of his game was a big part of his off-season. This fall, he said his goal was “just to stay on plane, hitting wise, to drive the ball more and have better barrel control.”

Corner infielder Matt Goodheart also played his freshman season at a JUCO, at San Jacinto College. He hit .355 with 7 home runs and 43 RBIs. These numbers are only slightly better than Battles’ freshman stats.

In 2019 at Arkansas, Goodheart hit .348 with 4 home runs and 42 RBIs. That kind of precedent is a good sign as Battles transitions to the high-major college game. It’s a small miracle he’s still playing college ball at all, considering he was a strong prospect heading into last year’s MLB Draft before it was cut to five rounds.

Now, Baseball America rates him as the 131st-best prospect for the 2021 MLB Draft. That means landing somewhere in the fifth round (ahead of the 34th round where he was picked in the 2019 MLB Draft).

“Once we found out it was a shortened draft, I decided just to come to Arkansas,” Battles said. “Coming here, I was going to get better. I already know that and I feel like I’m going to do well here, so I’ll improve my draft stock.”

“Jalen seems happy here and he’s a very, very good defender,” Hogs coach Dave Van Horn told D1Baseball.com’s Kendall Rogers. “We didn’t think we’d get him to campus to be honest with you, but then the draft changed. Both him and Moore are playing short this fall, and that’s been a fun competition to watch unfold.”

Battles is trying to earn a starting spot in the middle infield alongside returning Moore. But in the fall Moore also practiced some at shortstop.

Battles has shown signs his hitting work is paying off, too. In Game 4 of the Fall World Series, Battles went 2-3 with a single, a home run and 2 RBIs in a 2-1 win.

Battles is big for a middle infielder, standing 6-2, 195. My player comparison is a young Xander Bogaerts of the Boston Red Sox. Bogaerts is a solid defensive player who hit for average and had average power at the plate when he entered the league.

A more grounded comparison would be Nick Ahmed of the Arizona Diamondbacks. Battles and Ahmed have about the same build, both standing about 6’2 195lbs. They are both smooth defenders who are developing into weapons at the plate.

Ahmed is 2x National League Gold Glove award winner and has slowly transformed himself into a weapon at the plate.

Battles has a great glove on defense, and time will tell with the bat. Early signs show promise, and if any coach can turn him into a dual threat it is Dave Van Horn, who also attended McLennan Community College before playing for the Hogs decades ago.