Search
Home Arkansas Football Around the SEC “Oh Crap… We Are in for A Long Night”: Shane Beamer on... 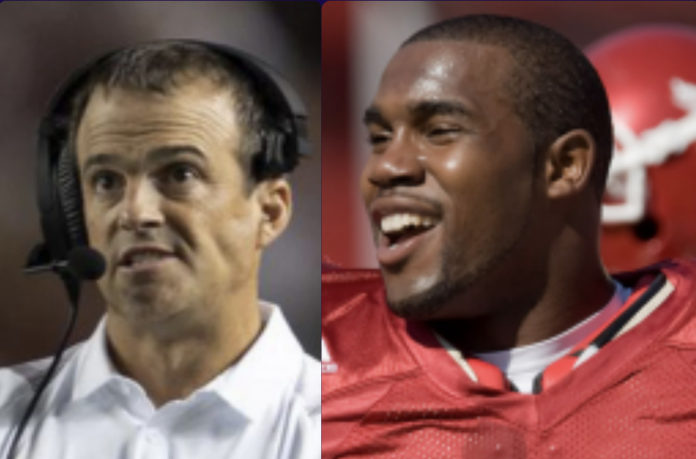 South Carolina head coach Shane Beamer will never forget the night he ran into the most fearsome rushing attack in Razorback football history. The year was 2007, and Beamer was a 30-year-old assistant working with the South Carolina linebackers and special teams when the No. 23 Gamecocks rolled into a Fayetteville on a brisk November Saturday.

They faced the deepest and most talented group of running backs and fullbacks that Arkansas has ever produced, with Michael Smith and Peyton Hillis along with headliners Felix Jones and Darren McFadden. On this particular evening, Jones got the ball rolling, breaking off touchdown runs of 40 and 72 yards in the first quarter to put Arkansas up 21-3.

Beamer recalled South Carolina’s defensive coordinator, Tyrone Nix, on the field talking to another defensive assistant in the press box as the avalanche began. “The coach in the box is like, ‘Hang on a second, don’t say anything, I am up here drawing.’ The coordinator is like, ‘You are up there drawing?’ He is like, ‘Yeah, I am putting together a plan that we can do some stuff to try and stop them.’”

Beamer, speaking in a recent press conference, continued: “I am like, ‘Oh crap, if we are up here drawing stuff up on paper in the middle of the first quarter, we are in for a long night.’ And we were.”

By the time the dust cleared, Arkansas had racked up 541 rushing yards on the night en route to a 48-36 win. Peyton Hillis and Michael Smith chipped in with 67 total yards. While Tulsa native Felix Jones scored led the team with three touchdowns, along with 163 yards, it was Darren McFadden who notched the most memorable night. The junior superstar from Little Rock racked up an SEC-record 323 rushing yards including a mic drop of an 80-yarder in the fourth quarter.

“Darren McFadden gave it his all. He is like another Barry Sanders,” said former Arkansas football coach Houston Nutt, who was on the staff at Oklahoma State when Sanders won the Heisman in 1988. “The bigger the game, the better (McFadden) plays, and that is why he deserves the Heisman.”

Unfortunately for Razorbacks fans, McFadden’s Heisman stock had already dropped too low that October for him to make enough ground that November (which featured another masterpiece at No. 1 LSU). Still, it was a fitting final game in Fayetteville for the greatest Arkansas tailback to this day.

Beamer and rest of the South Carolina football staff were thoroughly humbled. “Obviously it was a mismatch tonight,” former Gamecocks coach Steve Spurrier said. “Looked like a Division III team trying to play an SEC team. Or maybe a Division III team could have slowed them down a little bit better than we could.”

On Saturday, Beamer will enter Fayetteville again to face a fearsome Razorback running attack. Again, the Arkansas rushing leader is a No. 5 (Raheim “Rocket” Sanders, who broke a school rushing record in the season opener) and again a key complementary runner who hails from Tulsa (AJ Green).

Throw in talented freshman Rashod Dubinion and a possible return from Dominique Johnson and the Hogs may have enough firepower to cause flashbacks to that 2007 night. “Their run scheme, they do a great job coaching,” Beamer said. “Sam is an offensive line guy. You see that when you watch them play. They are big. They are physical. With their size up front, they are able to cover people up.”

“You watch that Cincinnati game.. the ball’s snapped, you pause it after a second and you can’t see any of the Cincinnati defensive lineman on tape because they are covered up by double teams. There are just gaps for the quarterback and running back to run through. Then, they do a great job coaching technique and fundamentals. Then they do a great job schematically as well. They use tempo, so you have to handle that. They will get into multiple formations. They have motions. You have to be disciplined with your eyes against these guys because they are big and physical but now they are also going fast also.”

While Sanders does look good enough to become an All-SEC performer, at this point it seems less likely he would surpass McFadden as the greatest tailback in program history. However, this group of Hogs has a chance to surpass the 2007 group in total yards rushing because they have a much better running quarterback in KJ Jefferson (compared to Casey Dick or Mitch Mustain).

“To be that big [6’3″ and 242 pounds) and people just bounce off of him back there,” Beamer said of Jefferson. “In the run game, run the football like he does but also, in the passing game, be able to sit back there and take hits and throw the ball down field or to have people bounce off of him and he is able to scramble and keep his eyes downfield and he is able to throw.”

“You watch Jefferson’s first run on Saturday for a touchdown, and it is either [Matt] Landers or [Jadon] Haselwood on the sideline and just kicks the DB’s butt for Cincinnati to allow Jefferson to get into the end zone. They do a great job on the perimeter also. They have the other quarterback, [Malik Hornsby], that is a world class track guy that is a blazer when he comes in with his speed. They have different ways of getting him the ball.”

“They are a real challenge, starting with their size but they are well-coached. They are very multiple.”