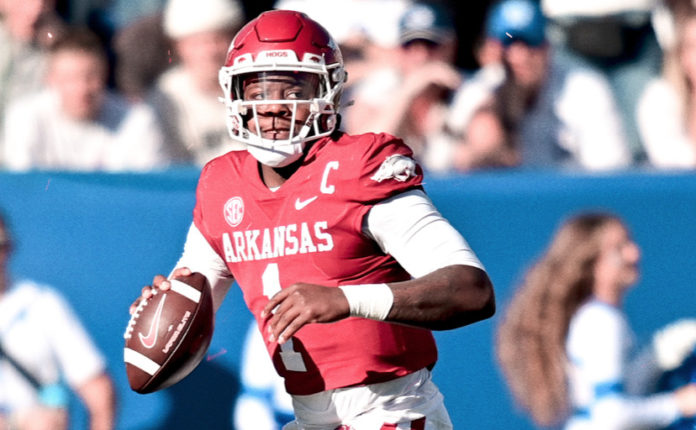 If he’s said it once, he’s said it a million times. Sam Pittman knows KJ Jefferson is the most important player on his Arkansas football team. Sometimes Arkansas fans forget that. They had especially done so in the last three weeks after Jefferson’s fumble near the goal line proved to be the turning point of a three-game winning streak turning into a three-game losing streak.

Pittman stayed the course, as did the sane folks of the Razorback football fandom. Even after Malik Hornsby ran for more than 100 yards and threw for more than 200 last week against Mississippi State, there was no doubt that Jefferson was still Quarterback No. 1, as it were. Saturday against BYU, he proved it in a 52-38 win over BYU.

On a day the officials* tried everything they could to ensure a high-scoring affair (seriously, five pass interference calls, practically all of which led to something big including two touchdowns for BYU), Jefferson was more than happy to oblige.

In his first game back after a likely concussion – notice Pittman never actually said that was what kept KJ out of the game against the Bulldogs – Arkansas’ junior quarterback went off, throwing for 367 yards on 29 of 40 passing with a career-high five touchdowns through the air.

BYU clearly knew they couldn’t let Jefferson beat them. The only issue for the Cougars was that they focused on his running ability. Certainly they stalled him as he carried 10 times for just 32 yards. Briles didn’t call many designed runs for Jefferson, either, which apparently – who’d have thunk it? – was the right move. Apparently, BYU forgot he’s the second-most accurate passer in school history. Pittman told his maligned offensive coordinator Kendal Briles to focus the game plan on letting Jefferson find his rhythm, especially over the middle.

Early, it led to more complaints. Jefferson started just 4 of 9 and the Twitter crowd was unhappy with Briles’ plan of attack. Even the ESPN announcers, Dave Pasch and Dusty Dvoracek, were wondering on air why Arkansas wasn’t going more often to Rocket Sanders who was averaging more than 10 yards per carry to that point.

Turns out, Pittman and Briles are a lot smarter than people with a soapbox on social media. Sanders still picked up his yardage – a career-high 175 with two touchdowns – Jefferson set a career high with those five scores through the air and Briles earned himself some plaudits from almost every naysayer calling for his proverbial head last week. Almost.

“Like I told KB all week, let’s just open it up,” Pittman said. “‘Throw the ball first down, throw the ball middle of the field.’ Thought we might could complete some passes.”

Arkansas has new life and as Pittman said, which was reiterated by others through the week, the Hogs are exactly where they were at this point last year: 4-3 with a world of winnable games in front of them after the bye week.

Those games would suddenly become a lot less winnable without Jefferson, though. And for a moment Saturday, the worst was feared. Never one to take a play off, Jefferson went around the left side of his offensive line on a run late in the game with Arkansas already ahead by 17 points. He went up into the air to reach for the first down at the 2, then landed square on the crown of his helmet and laid on the ground for several seconds afterward. The announcers immediately knew something was awry and they weren’t wrong as Jefferson was pulled from the game.

Pittman said after the game, thankfully for his team, Jefferson suffered a stinger and would be just fine. Arkansas staffers were seen fiddling with what appeared to be a contact lens in Jefferson’s eye after the game returned from commercial break and the Mississippi native continued on the sidelines with his trademark smile.

The Hogs had no shot without him even on Saturday. He made an All-World play in the second quarter, escaping from three would-be sacks to fire a pass to Trey Knox for a 36-yard gain on third down that ultimately led to Rashod Dubinion touchdown to make it 31-21 Arkansas before the break.

It’s the play of a superstar. It’s the play of a player no team could afford to lose. Some may even go so far as to say Jefferson needs to play smarter, more controlled football and stop trying to go the extra mile (like he did in the fumble against Texas A&M). But that’s nonsense. Going the extra mile is what KJ Jefferson does and it’s what Arkansas needs him to do to ensure this season ends up the way it appeared it might go after three games.

And Saturday is proof that it can. KJ can.

“This was everything,” Pittman said. “It had everything to do with confidence we needed, to beat a team on the road, BYU, that should help us. We put all the eggs in this basket.”