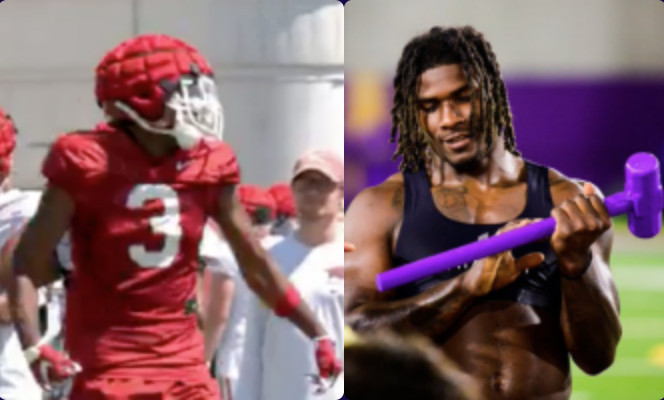 Over the last few years, prediction season wasn’t a particularly rosy time for Razorback football fans. Usually, experts slotted Hogs at or near the bottom of the SEC West. And, until last year, Arkansas largely fulfilled those expectations.

The tide, however, has turned this off-season.

Insider after insider is throwing out predictions of an Arkansas football season that would match or exceed last year’s 9-win squad, no small feat in an SEC West packed with Top 25-caliber teams including national champion favorite Alabama. One of the more well known analysts is CBS/247Sports’ Josh Pate, who feels Arkansas is neck and neck with Texas A&M for No. 2 in the nation’s best division.

In fact, Josh Pate’s SEC predictive model recently spat out the following prognostications for both teams:

“Arkansas is going to be an overachiever again this year. The passing game’s probably going to surprise a lot of you, it won’t surprise them,” Pate says on ‘Late Kick with Josh Pate.’ “

In order for Texas A&M and Arkansas to achieve these records in the regular season, both teams are going to need to win some big games in a tough non-conference schedule (for Arkansas, anyway) and in the usual meat-grinder of a conference schedule. Arkansas and Texas A&M notching nine wins each means teams like Ole Miss, Auburn and LSU under-achieve in Josh Pate’s model, as you can see with the predictions for those three teams:

Pate’s assessment of the LSU football program is especially interesting because he keys in on the part of the team that comes into the 2022 season heavily influenced by former Razorbacks – the secondary. Soon after bowl season, Arkansas and LSU pulled off the closest college football equivalent to a trade when two multi-year Razorback starters in the defensive backfield transferred to LSU and two younger LSU standouts transferred to the Razorbacks within the span of weeks.

Now, the former Razorbacks could both start for LSU. It appears to be a near-lock Greg Brooks Jr. will start while Joe Foucha is battling it out to start at safety. While that’s great for the former Hogs on an individual level, in the bigger picture this isn’t a great sign for LSU, Pate insinuates.

“I’m not so sure that they’re built to go up against the best passing attacks in this league,” he says.

“I think they could take their lumps in the secondary. Even though they addressed it as best they could, you cannot get around the fact that you’re playing with guys who are less than ideal, even at their best, to deal with some of the passing attacks you’re going to face down here. There’s nothing they can do about that at this point.”

Pate is in part referring to the turnover that the entire LSU defense has undergone with the arrival of new LSU football coach Brian Kelly. No more Corey Raymond, who had coached defensive backs at LSU since 2012. Plus, the Tigers’ new defensive coordinator, Matt House, hasn’t led defensive unit in college since 2018.

When the smoke from all the cleaning house cleared, the new LSU secondary found itself filled with seniors and super senior transfers like Foucha and Brooks who “were good enough, but not good enough to to NFL,” says Carter Bryant, host of the Power Hour LSU with Carter the Power. “When you have players who return like that, there’s a reason they are returning. If they had the option to leave, they would have done it.”

“This is the weirdest secondary LSU has ever had,” Bryant added in a phone conversation with Best of Arkansas Sports. “Before going into the season, LSU has always had a bonafide stud – a first rounder at DB. This is the first year in a long time they haven’t had that.”

If judging purely off contributions so far in fall camp, it would appear LSU has won the “trade” with Arkansas since Brooks and Foucha will both play heavy minutes early on. Former LSU defensive back Dwight McGlotherin, meanwhile, hasn’t yet risen above third-team in the Razorbacks’ camp. The other former Tiger, Landon Jackson, is raw as a sophomore defensive end but projects into developing into the Hogs’ fourth-best end by the end of the season.

Still, however, it’s likely that McGlotherin will rise in the pecking order given his high level of talent. It’s just a matter of earning more trust with the coaches and learning Arkansas defensive coordinator Barry Odom’s schemes. It’s possible McGlotherin is behind because the LSU football team “ran man coverage on every single snap for a year and a half – 2020 and the beginning of 2021,” Bryant says. “So McGlotherin is used to not even having to think about what coverage he’s doing… it’s different with Odom with keys to read and learning when and how to pick up different receivers.”

If Arkansas does finish at 9-3, while LSU limps to a 7-5 finish largely because its secondary keeps getting filleted by top quarterbacks, then LSU football fans are going to lose a lot of love from their new defensive back transfers. In that scenario, it’s likely that McGlotherin and Jackson will have both contributed enough to Arkansas for the Hogs to have gotten the upper hand with in the LSU trade (even if it will take another season or two to truly take stock given Jackson and McGlotherin will likely return, while it’s in the realm of possibility for Greg Brooks to use his super senior season in 2023).

Regardless, if you read between the lines with what Pate says about LSU, then Foucha and Brooks are serving as stop gaps in the weakest LSU secondary in years. Arkansas, meanwhile, has the luxury of bringing along McGlotherin and Jackson more slowly in positions that are still deep without them.

“Arkansas is becoming now a program where the intangibles and the culture are such that you blindly buy them, or at least I do,” Pate said in the below “SEC Predictions” episode.

“I think Kendal Briles, being this the first time he’s ever had a returning quarterback, has a lot to work with still. They have a lot of improvement still to be had in their passing game, even with how many accolades KJ Jefferson has enjoyed, I think they can get better in their overall passing metrics.”

“They’ll always have what they need on the ground this year. I have no question about the mentality of that team. I think that they still feel targeted in a lot of ways. Number one, by their own administration. Because if you look at the schedule, it’s ridiculous. They go to BYU – I cannot wrap my mind around the fact that they’re going to go to Provo, Utah in the middle of conference play, no bye week until afterwards.

“This is a team that can be competitive in every game they play this year…. the Alabama game is the only one that you look at and say, that’s probably a sure loss. It’s not even a sure loss there because they play them at home.”

“Ask Texas what it’s like going up there. Secondly, Bama struggled on the road last year, Florida, Auburn, A and M, so it could happen.”

Also, just for the sake of thoroughness, here are the predictions for the other two SEC West teams:

Foucha talks about his time at Arkansas starting around 2:50 below: