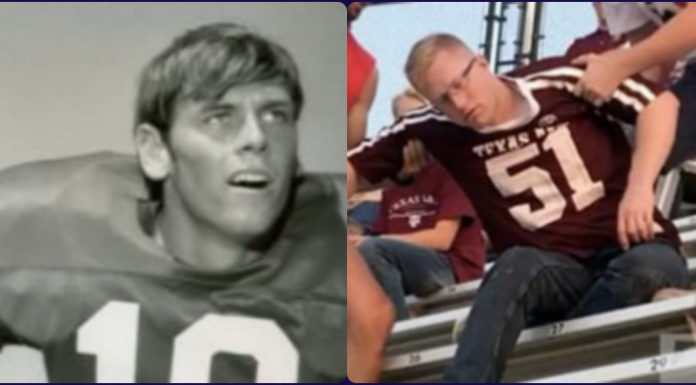 The Arkansas-Texas A&M rivalry is decades old, but among Razorback fans of a certain age one of the series’ most beloved figures is Scott Bull, who led the Arkansas football program to one of its greatest wins in 1975.

In a recent interview with me for BestofArkansasSports.com, the former quarterback reflected on that and Saturday’s matchup of the 16th-ranked resurgent Razorbacks vs. the nationally No. 7 Aggies. Bull plunged long into the present before reflecting on the past.

What Coach Sam Pittman began building last year from the Arkansas ashes he inherited to these Razorbacks’ 3-0 start heading into their CBS televised 2:30 p.m. SEC opener at the Dallas Cowboys’ AT&T Stadium. Texas A&M is currently a 5.5-point favorite, but a lot of Arkansas sports betting followers are ready to play those odds any day given how strong the Hogs have looked.

Regardless of the outcome, Scott Bull has been anticipating new times more than clinging to old times.

Especially since old football times were about all UA grads could cling to as Arkansas’ Bret Bielema era started collapsing its final two games of 2016 through its 2017 demise and the far worse two Chad Morris years to follow.

“It is great to see Coach Pittman put this team together and get some great assistant coaches,” Bull, a Jonesboro native and longtime Fayetteville resident recently retired, said. “I’m really proud of this team and how hard they play.  I felt like we didn’t have effort there for a few years.”

“I don’t know what it was about, why the kids didn’t give the type of effort that you’d think they would, but I think right now we’ve got kids with  lot of heart and it’s fun to watch them play.”

“It feels good to be ranked again no matter who we’re playing,” Bull said.

For him it’s especially special to be ranked versus the Aggies ranked.

The 9-0 Aggies were nationally No. 2 and heavy favorites over No. 18 Arkansas when they clashed on a cold Dec. 6, 1975 before an overflowing War Memorial Stadium in Little Rock.

Undefeated A&M of course was playing for the SWC championship and possible national championship.

“They were No. 2 and they would have moved up to No. 1 if they won that day,” Bull recalled.

They didn’t. Arkansas routed them, 31-6. By winning, the Razorbacks achieved a triple tie for the SWC title with Texas, a victor over Arkansas but loser to A&M, and A&M, and went to the Cotton Bowl by virtue of Texas and A&M playing in it the most recently.

The dispirited Aggies were relegated to the Liberty Bowl and lost, 20-0 to Southern California.

The game didn’t begin as a rout but as a defensive struggle. That improbably changed when Bull, a running quarterback in a veer offense that seldom passed, connected with improbable 5’9″ running back turned receiver Teddy Barnes.

Arkansas receivers coach Jesse Branch always said Freddie Douglas, another little 5’9″ ex-running back become receiver from little McGehee, was supposed to be the play’s primary receiver on what Barnes caught beyond  two Aggies in the end zone.

“I have seen the replay enough to tell you  I  couldn’t have looked too many other places,” Bull recalled.  “He (Barnes) might not have been the primary but he caught my eye or something because I got back in the pocket and when I could turn myself around I put it up in the air and I was hit right after I threw it.”

“So I was laying on the ground when he caught it and heard the crowd yell so I knew something good happened.”

It’s the play most remembered, but Bull said Arkansas’ defense should be most 1975 A&M game remembered which he morphed into 2021 present.

“You watch that defense running around like it does now and being on the ball and running to the ball reminds of the 1975 team and (safety) Bo Busby and that crew that set a tempo in our games, especially the Texas A&M game,” Bull said. “They stuffed that A&M offense all day long.”

Bull recalled the current defense carrying Arkansas in its offensively slow start of the eventual 38-17 season opening victory over Rice and the 16-0 first half shutout it posted in the 40-21 triumph over Texas.

Arkansas Football Similarities Now and Then

“This defense is doing those type of things,” Scott Bull said. “That’s the type of thing that gives the offense a lot of heart when the defense is stopping them and we can’t move the ball.”

“They stop them again and we get the chance to get out on the field again and make something happen.  And our offense did that again like this offense does.”

“That was the year Razorback football came back,” Scott Bull said.  “We had three or four tough seasons.  But when you have a good team the Razorback fans go crazy.  That’s what’s so good about what happened last year.  We’ve got smart fans.  All the fans knew that last year’s team was giving effort.  And there was tons of effort last year and now this year we are starting to see some more of the fruit.”

The fans turned out to see it filling Reynolds Razorback Stadium and partying into the wee hours up upon the Hogs beating Texas and even coming back 66,000 strong for last week’s 45-10 tuneup over outclassed Georgia Southern.

Of course that 1975  December game was the season’s apex.  This clash is followed on consecutive SEC Saturday at nationally No. 2 Georgia, at No. 13 Ole Miss and No. 23 Auburn in Fayetteville.

“I’m hoping the boys can keep it going and we don’t get people hurt,” Bull said.  “Because we have some talented players this year.  We get a chance on offense to the ball in some talented players hands and when the opponents’ offense is on the field we’ve got a defensive line that is set up to make the linebackers make tackles.”

“And we’ve got a crew of linebackers that are as mean as snot.  And probably for the first time in 10 or 15 years we’ve got a secondary that can run with people.  So I’m just proud of the whole team.  I really am.  They are talented and they care and that’s what it takes to be successful.”

Make sure to see highlights from the 1975 game here.

Although the Aggies have won all games since 2012, the Razorbacks still lead all-time with 41 wins to Texas A&M’s 33 wins (plus three ties).

Here’s how all the games since 1975 have panned out: