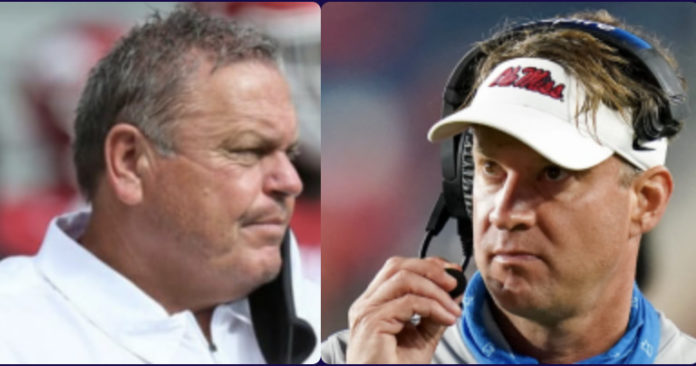 We will find out on Saturday who’s the better coach: Sam Pittman or Lane Kiffin.

The Arkansas at Ole Miss game at 11 a.m. isn’t on too many national pundits’ radars even though it is an SEC West tilt that involves ranked teams with Hogs at No. 13 and Rebels at No. 17.

However, it is a very interesting matchup considering these two programs are in the same boat in so many ways. The outcome will go a good way in deciding whether Arkansas got the better end of the deal when Ole Miss Coach Lane Kiffin spurned Arkansas for the Rebels when they sought to replace Chad Morris in 2019.

Eventually, the Hogs settled on longtime offensive line coach Sam Pittman, and it has paid big dividends early as Arkansas made strides in a three-win season in his debut last fall and then shocked the college football world by storming to a 4-0 start in 2021 with wins over ranked Texas and Texas A&M, which snapped a nine-game losing streak to the Aggies.

Then, alas, Arkansas’ high hopes were trounced by No. 2 Georgia last week 37-0 setting the stage for another key road tilt at No. 17 Ole Miss.

“If I go totally off and start having meetings with the players and all this stuff, I think I’m sending a message that I’m panicked— and I’m not,” Pittman told the media this week.

“We got a good football team and we got our butt kicked by a really good football team. And we don’t like it and we’re not accepting it, but I’ll be damned if Georgia is going to make us lose this Ole Miss game.”

Ole Miss is on a similar trajectory under Kiffin. Despite a 33-21 loss at Arkansas in 2020 where Rebels then-sophomore quarterback Matt Corral threw six interceptions, the Rebels landed a bid to the Outback Bowl and defeated a solid Indiana team 26-20 to finish 5-5.

The Rebels have played well this fall, but with W’s over Louisville (43-24), Austin Peay (54-17) and Tulane (62-21), don’t have anything close to the signature wins the Hogs have. Las week, Ole Miss experienced a similar loss as the Hogs did when No. 1 Alabama rolled past them 42-21 in Tuscaloosa, Ala.

So, that sets up an interesting case study game. Two coaches, who took over programs at the same time facing the challenge of motivating their teams to play well after a blowout losses to very good teams.

This, my friends, is the exact situation where coaches earn their money, where the cream rises to the top. Sure, you want your coach to win all of its games, but unless you are Alabama or Clemson (not this year on the latter) or maybe a few others on occasion, that isn’t happening.

A program needs a coach that can whether a storm, bounce back from a loss. In today’s game, one loss doesn’t eliminate you from a playoff spot. I’m not expecting that for the Hogs or Razorbacks, but both are still in line for a prime bowl game at this point.

The winner of Arkansas vs Ole Miss will be happy and content knowing they are in the upper echelon of the SEC West and control their own destiny to contend for the No. 2 spot (although Arkansas still has yet to play Alabama so you could say mathematically they are still in contention for the SEC West title). Either way, there is a lot at stake here, and a “W” will go a long way to healing the wound left by a whipping by a juggernaut.

“We’re back to SEC defenses in the SEC,” Kiffin said during Wednesday’s SEC coaches’ teleconference. “There’s all these teams giving up 14-15-16-17 points per game. Last year was a strange year with the (defensive) numbers.”

“When you go play an Alabama or Georgia defense, they can really throw you off. I think that happened to both of us (Ole Miss and Arkansas) last week.”

And how, exactly, does Kiffin plan to lead Ole Miss back from such a shellacking?

“First time since watching the film and meeting with the players,” Kiffin said when he met with the media Monday. “It was obviously a disappointing loss. Unfortunately, it really is what we talked about during the week.”

“You go into that place with the number one team in the country and you don’t play really well in all areas, don’t execute and make mistakes, they’ll knock you down really quick, which is what happened. They’ve got great coaches, great players and came to play. I’m sure last year’s game was in their head defensively, especially. Hats off to them for doing a great job.

Obviously, I haven’t been any of Kiffin’s meetings or practices, but this sounds pretty generic. I wonder what he really says to his team? He has never struck me as a guy a player would just run through a brick wall for, unlike Houston Nutt or now Pittman. Kiffin, especially early in his career, was a bit of a prima donna and enjoyed the spotlight (“Joey Freshwater” ring a bell?)

That doesn’t seem to be as much of the case now and maybe some time at Florida Atlantic grounded him. Still, I don’t think I’d call him a master motivator. The way he put his foot in his mouth after making what were meant to be inspirational popcorn comments before the Alabama game shows that:

We don’t have to guess on what Pittman says to his team. You read the above quote. Now, read this one, that’s two from one presser on how to move past the Georgia loss.

“I mean, look: We’ve been underdogs in 14 of our 16 games, including Saturday. We’ve never been favored to win an SEC game. We’re doing things right, we’ve just gotta do ’em better.”

Advantage Pittman. A team is going to follow a guy out of the darkness of adversity who they really believe in – a guy who has a proven track record of such. Pittman asked his team to trust him from the beginning. Many were broken and gun shy following the miserable Chad Morris Era.

Pittman took those same players with help from defensive coordinator Barry Odom and offensive coordinator Kendal Briles and made them competitive in the SEC in less than two seasons. That is running through their minds this week as they prepare for another challenging game.

While Kiffin may not be a rah-rah guy, he is a great offensive mind. Odom dominated them last year with his three-man front defensive schemes. So much so that Ole Miss has incorporated it into their defense.

“Barry should be the Broyles Award winner for what he’s done compared to where they were a few years ago,” Kiffin said.

Corral is a better QB this season and Ole Miss will be prepared. That doesn’t mean Odom doesn’t have more tricks up his sleeve that Corral hasn’t seen. Expect there to be a mean chess match in the middle of a football game again.

However, the real mental part of this game will be won in practice this week. Who shrugs off a bad loss better and picks up the momentum to begin a climb back to the top of the division? I’m going with the guy who listens to juke boxes following wins and not the guy hanging at the Oxford country club so much that he bought a home there.

Arkansas has the right coach on its sidelines, and it will be evident again on Saturday.