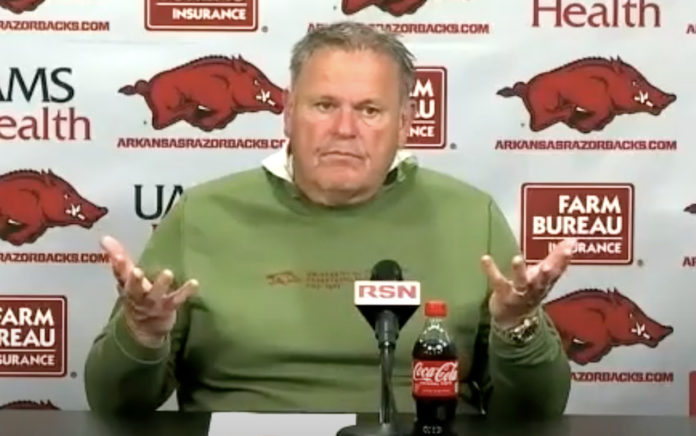 Malik Hornsby isn’t KJ Jefferson. He never was. He probably never will be. Nor is Cade Fortin. Nor was he ever. Nor will he probably ever be.

The Arkansas offense struggled without Jefferson at the helm and Hornsby’s first extended playing time against Mississippi State back in Week 6 further devolved Saturday against LSU. At one point in the second half, LSU had sacked the redshirt sophomore more times than he had completed a pass.

It’s difficult to lay the entire blame at Hornsby’s feet, though. Arkansas may not have done much more even with a healthy Jefferson, whose injury must be severe, considering the urgency and closeness of the game. One gentleman in particular would have had his way with any Razorbacks quarterback who lined up behind center.

Harold Perkins Jr. isn’t just a likely Freshman All-American, he’s a potential All-American, period. Hornsby is faster than Jefferson and perhaps the fastest player on the Arkansas roster, and twice he was tracked down from behind by LSU’s star linebacker. On a critical fourth down midway through the third quarter, with Arkansas trailing 6-3, and around midfield, coach Sam Pittman elected to go for it. Hornsby took the snap and immediately ran right. With the specter of Perkins likely in his head, he attempted to backtrack away from LSU’s pressure and fell several yards behind the line of scrimmage, a good couple yards away from the nearest Tigers defender.

LSU scored the game’s first touchdown on the ensuing drive, capping a five-play, 40-yard series with a 1-yard touchdown run by Josh Williams.

The key play on the drive was Jayden Daniels finding Keyshawn Boutte over the middle for a gain of 26 the play before. That completion alone went for two more yards than Hornsby had thrown for all day to that point. With such ineffectiveness, offensive coordinator Kendal Briles’ options were limited. LSU knew it.

Rocket Sanders, the SEC’s leading rusher entering the game, had 46 yards on 12 carries. Hornsby, who can carry the ball well, had 37 yards on 18. AJ Green and Rashod Dubinion combined for 10 rushes netting just 33 yards.

So, following LSU’s touchdown drive, Briles and Pittman made a drastic change, opting to put Fortin into the game. He completed his first two passes drawing – some sarcastic, some not – proclamations online that Fortin should have gotten the nod from the outset. Arkansas still went three-and-out. The South Florida transfer did provide the lone offensive bright spot early in the fourth quarter when he found Matt Landers for a 40-yard touchdown to trim LSU’s lead to three points.

But nothing to that point suggested Arkansas could get another score, let alone another touchdown. Perkins was everywhere, finishing with four sacks, eight tackles and two forced fumbles, the last of which was pounced on by Mekhi Wingo with 1:17 left and sealed LSU’s escape.

A bulk of the blame for the loss goes up front. Yes, that means Pittman and Briles, but more so it means Arkansas’ front line. The supposed best unit on the whole roster, for the second straight game, was bad. Besides the 2.9 yards-per-carry Arkansas averaged, they allowed five sacks, four more tackles for-loss and two additional quarterback hurries.

But it’s on Sanders, too. He entered as the SEC’s leading rusher even after struggling for the 60 yards he gained in last week’s loss to Liberty. Saturday was worse.

“We’re not breaking any tackles. I don’t think we broke a tackle into the fourth quarter,” Pittman said. “It’s hard to have a good rushing [attack]. Look at their back. He carried us eight, 10, 12 yards at times. Made guys miss in the hole. We have to block better and we have to make guys miss and we’re not doing that at any position.”

The Arkansas Democrat-Gazette’s Scottie Bordelon asked one of the better questions to Pittman in the post-game press conference. Arkansas’ offense has done well most of the season, but they always seem to allow the opponent’s best defensive players to make big plays. Durell Johnson, for instance, had two sacks and 3 1/2 TFL for Liberty. Will Anderson had seven tackles and 1 1/2 for-loss for Alabama. Then Perkins went off Saturday.

How does that get fixed? Pittman literally shrugged.

In another part of the press conference, Arkansas offensive lineman Ricky Stromberg said there was no specific preparation for Perkins different than other linebackers the team had faced. “There was no game plan for him really,” Stromberg said. “They just put him out…we knew the whole time, the whole week he was going to be out there. We knew he was out there. He could fire. We knew when he was in the box whenever we were in pass protection that he would spy, he would stay on the quarterback. But we didn’t really game plan for him. I think he just got put in good situations to make good plays, and he did.”

Rocket Sanders added: “With [Perkins] rushing and his speed, my coach was saying stay in a little longer and just watch him as well. But I feel like he’s a great player and he did a good job today. I give a shout-out to LSU.”

Now, it’s down two games. That’s all Arkansas has left to figure it out. The one bit of good news is that Ole Miss doesn’t have a bonafide star on the defensive side. And in fact, the Rebels’ defense is middling in the SEC. It might only matter, though, if Jefferson is back and healthy because, in fact, Hornsby and Fortin are not bringing to the table what he does.

“Your best player on your team can come back and play? That would motivate all of us.”

More from Sam Pittman on Razorbacks

On key to rallying the team after Liberty game letdown:

“I think you saw a passionate football team today. We lost. I think we saw a non-passionate football team last week, and we had to get back to playing physical, hard, all these type things. To be honest with you, we changed up practice. We changed up Friday. My team meeting was different. It started with a highlight film of us. We just tried to do a better job of motivating and a little bit better job of coaching and game planning. And I think we did; we just couldn’t score another touchdown to win the thing.”

More about Arkansas vs LSU here: