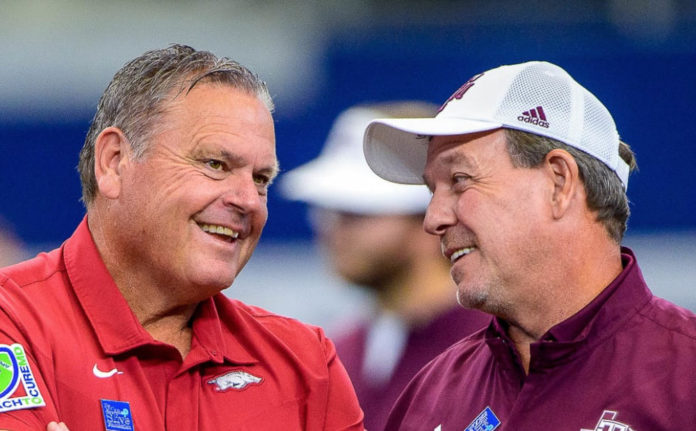 Show that man his money.

Sam Pittman has made Arkansas football again. No, the Razorbacks aren’t quite to the national powerhouse level that Hogs Nation has long sought. But this also isn’t the 1960s or 70s anymore. Besides, a return to something like those days appears closer to the horizon than it has in forever.

Details of the contract Pittman signed with the university were released earlier this week. He will make $5 million a season through 2026, an increase of $2 million a season over his previous deal. Throw in the retention bonuses and the deal ultimately works out to about $6.2 million a year. Not exactly a small chunk of change.

Pittman led Arkansas to its best season in a decade last fall. The Razorbacks finished 9-4, capping the year with an Outback Bowl win over Penn State. Another nine-win season in 2022 would yield another $750,000 bonus for the Head Hog, too.

Arkansas Football Coaches and the SEC

Long has this author petitioned Arkansas athletics to pay for results. If being the best of the best is something the university (or Razorback Foundation, whatever) truly desires, then money would have to be doled. In years past, although coaches were often making more than their predecessors, the head coaches at Arkansas generally didn’t make favorably comparable salaries to their SEC counterparts, meaning Arkansas almost never cracks the top five in the SEC when it comes to its head coach’s football salaries. Even six years ago it was similar to what is it now, albeit with lower total numbers.

That simply does not work.

If one considers the $6.2 million as the expected pay for Pittman next year, Arkansas is, at least, getting closer to hitting the mark.

Nick Saban, of course, makes the most money in the SEC at Alabama, getting $9.5 million a year. Jimbo Fisher and Brian Kelly, at Texas A&M and LSU, are right behind at $9 each. Those three are expected given the schools. For the most part, those have been among the most successful programs in the SEC for a bulk of the last 10 years. Occasionally, yes, another team will hop into the top three and one of those three (never Alabama, in fairness to Saban) will have a down year in which it appears things could be trending that direction. But that trend never holds.

Sure, Texas A&M has probably disappointed its own fans and prognosticators. But the Aggies have, largely, outplayed their recent history and are still near the top of the SEC heap, even if they aren’t the summit. Georgia was getting a practical steal in Kirby Smart at $7 a year, though he’s negotiating a new mega-deal to stay in Athens after the national championship season. Billy Napier at Florida and Lane Kiffin at Ole Miss are $7.1 and $7 million each, and – get this – Kentucky is even paying for football. Mark Stoops is at $6.75 million after leading Kentucky to four straight bowl wins and a 10-win season in 2021.

So, a salary of $6.2 million would place Pittman eighth in the SEC. That makes sense given Arkansas’ status. It’s about where they’ve been cumulatively in Pittman’s two seasons in Fayetteville so far. The good news for university brass – and even those who root on the Razorbacks – is that it appears to be climbing.

Not only did the Foundation and/or university pay Pittman to produce, they paid his assistants. Overall, the Arkansas coaching staff has had its pay increased by 21% since the Outback Bowl. The belt has finally come unbuckled. At least, loosened.

Two questions remain. The first: is it enough money? Right now, probably. If you take Pittman’s base salary of $5 million a year, he’s even farther down in the SEC in a league where “a $5 million coach is standard,” as Saturday Down South’s Connor O’Gara notes. “In the SEC alone, there were 9 coaches who made at least $5 million in 2021. In FBS, there were 22 coaches at that mark in 2021 (not including the unknown terms of Brian Kelly’s contract at Notre Dame).”

Pittman’s devotees would likely suggest paying him so little, relatively, is insane. “He’s one of the top five coaches in the SEC!” The counter to that, obviously, is that he’s only been a head coach – not a head coach in the SEC, but a head coach, period – for two seasons. Even the most brilliant engineers straight out of MIT aren’t making the same amount of dough as the guy who’s been calculating equations at the same company for 20-something years. It just doesn’t work that way.

That’s also a question that’s moot. The comparison shouldn’t be one-to-one. The far more important thing to consider is whether the money will be worth it.

KJ Jefferson, Jalen Catalon, Bumper Pool and Ricky Stromberg all return to give Arkansas a nucleus that’s both experienced and talented. The addition of Jadon Haselwood provides opportunity little drop-off out wide. Three talented running backs are back. The offensive line has almost its entire two-deep, save a starting tackle. Questions exist on the defensive line and depth is a concern (isn’t it always?) at linebacker. But, on paper, Arkansas has a roster that, theoretically, could duplicate last year’s results.

Given the level of difficulty of winning nine games playing in the SEC, such a result should earn Pittman yet another bump in pay. More importantly overall, such a result would earn Arkansas more respect and recognition. It’s easier to win when you’re already winning, after all.

Besides, Arkansas has the money. All the buyouts that came before aren’t as damaging to the program as they sound given their price tag. The Hogs aren’t hurting for funds. The good news for their fans, at least now they’re starting to apply it in places it makes sense.