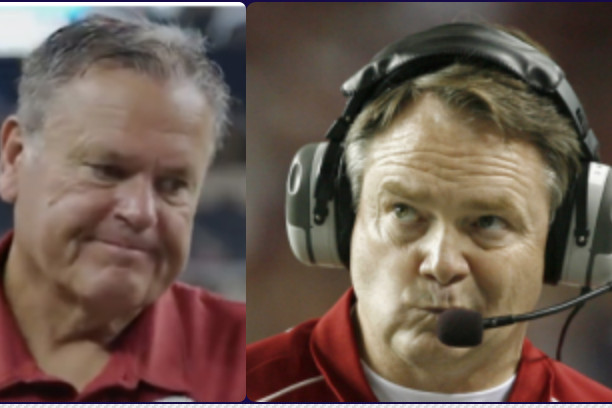 Current Hogs head coach Sam Pittman couldn’t help himself from pulling a Nutt reference this morning at SEC Media Days during his press conference. The opportunity came on a question about the Hogs’ defensive line, which hasn’t consistently wreaked havoc in the backfield of SEC opponents since the “Code Red” days of former defensive coordinator Keith Burns more than two decades ago.

Specifically, Pittman was asked about Dorian Gerald, the often-injured redshirt senior defensive lineman who was ranked as the nation’s top defensive end coming out of junior college. “Dorian Gerald has been there so long, I told him the other day, I think Houston Nutt brought him in,” Pittman said, smiling. “I don’t know how long he’s been there.”

Having lighthearted fun by invoking the names of former coaches is nothing new with the current Arkansas football program. Last August, athletic director Hunter Yurachek made a joke on Twitter alluding to Bobby Petrino’s motorcyle accident, after all.

What has been closer to a real joke, over the past few years, has been the ability of the Razorback defense to put consistent pressure on SEC quarterbacks. Their only consistency here has been an annual finish near the bottom of the SEC in sack and hurry-related stats.

Pittman, however, thinks those days should end soon thanks to better depth at defensive line. “I think we’ll be much better on the D-line than we were a year ago,” he said.

“We obviously need pass-rushers. I love the numbers. Actually we’re over, to be honest with you, on numbers there we’ve got 20, counting walk-ons. We need some elite pass-rushes. We went and got Landon Jackson. Obviously Zach Williams is returning and Jashaud Stewart is returning. Eric Gregory can do either/or. We signed Jordan Domineck.”

“We think we can get to the quarterback a little bit more.”

“We also feel a little better with our corner situation where we can play a little man coverage. We’ve got to get behind them, chains on first down. We did better last year. We have to continue getting better. Having man-to-man corners is going to help you do that.”

When discussing the line, he added: ‘Isaiah Nichols on the inside. Obviously losing Taurean Carter for whatever the period of time it is hurt us. He was having a wonderful spring. But other than that I feel good. Terry Hampton coming in. I feel good about Taylor Lewis, some of those guys. We’ll see what happens.”

Of course, the biggest key in all of this is the fact the Hogs will have one of the nation’s best defensive coordinators for a third straight season. That kind of continuity is huge, and Pittman made sure everybody knows how much he appreciates his coordinators in the face of the increasing churn that the transfer portal puts on teams.

“We lost a lot of players off our defense. We feel like we did a nice job of getting some portal guys to help us. Obviously we’re advancing the guys we had on our team.”

Barry Odom is a key, key part of the University of Arkansas’s success, along with Kendal Briles, all our coaches. He’s a very, very key part. Especially because he helps me, and he still helps me. I’m a work in progress. He helps me with head coaching responsibilities. I bounce everything off of him still to this day.”

“But Barry Odom is one of the most loyal, wonderful people that there is in the country. He’s unbelievable, loyal to myself and the university. I’m really, really happy that he’s part of our staff.”

See how big Arkansas’ defensive line is coming into the 2022 season here: