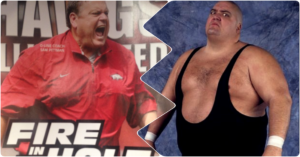 Inside all true Hog lovers a flag of fandom flies.

Today, it hangs at half-staff.

Head coach Bret Bielema just announced Jonathan Williams, widely considered as the nation’s top senior running back, will miss the rest of the regular season with a foot injury suffered in Saturday’s scrimmage. While teammates are saying all the right things about rallying in his absence, there’s no getting around the fact this is a serious downer of a newsflash.

Fortunately, though, the Hogs still have talented backs in Alex Collins, Kody Walker and Rawleigh Williams, and they still have an absolutely loaded offensive line by which holes for them will be rammed. Behind future NFL Draft picks like Sebastian Tretola, Frank Ragnow, Denver Kirkland and Dan Skipper,  this line could contend for the best in program history.

Which perhaps explains some of the extreme bop in offensive line coach Sam Pittman’s step as he strutted into the team’s indoor fieldhouse for a recent training session. Mid stride, Pittman realized he was being filmed for a UA-produced Mic’d Up segment. “Oh, I didn’t know he was taping that. I was walking out like I was King Kong Bundy,” he told a group of snickering linemen. “Which I’m not, so I’m gonna walk out like normal people do.”

Indeed, Pittman is no 6’5″, 458 pound wrestler once dubbed the “Walking Condominium” by Gorilla Monsoon. But he’s big on keeping things light, and this is the sort of good humor which will go a long way as a much-need andidote to the kind of bad news all teams endure over the course of a season. In the Hogs’ case, it just struck a little earlier, and harder, than normal.

Make sure to enjoy Pittman’s clip through the link below.

It’s part of the new BestOfArkansasSports.com roundup of the state’s best interviews and video features found on radio, TV and online. Sign up to get these free emails three times a week. Plus, you’ll get hyperlinks to the interviews below.

Click here to first see an example of what you’ll get.

Arkansas Razorbacks Athletic Department
Sebastian Tretola Mic’d Up, In Which He Teaches Frank Ragnow to Groove
Sam Pittman, In Which He Cops to Entering a Room Like King Kong Bundy
Briunna Freeman, basketball player

Discussion of how Jonathan Williams‘ foot injury – which could take him out of the season – will affect the Hogs
Jonathan Williams on Rawleigh Williams, now his likely replacement:  “He definitely reminds me of myself… when I came in, and how I was with Knile and Dennis Johnson, those guys and try to shadow them.  He definitely has the right mindset.”
5 News KFSM/KXNW
High School Football Previews – Farmington, West Fork, Lincoln, Cedarville
KAIT Region 8 Sports (inc. Red Wolves Raw)
Walt Bell, Red Wolves offensive coordinator, on squad’s first scrimmage
Whole Hog Sports
Bret Bielema
Wide receiver Kendrick Edwards
After Thursday practice
Razorback Nation [2:18]

Defensive lineman Bijhon Jackson – “Physically, I feel like we should be the best in the SEC”
After Friday practice
Whole Hog Sports [1:21]
Razorback Nation [2:20]

Defensive back Kevin Richardson, on working at free safety

Want the hyperlinks to best Arkansas sports interviews around, including the ones referenced in this post? Just sign up at the bottom of this page and you’ll get them delivered three times a week, all for free, at only the cost of a click. You’ll get something very similar to the below –  except with hyperlinks.