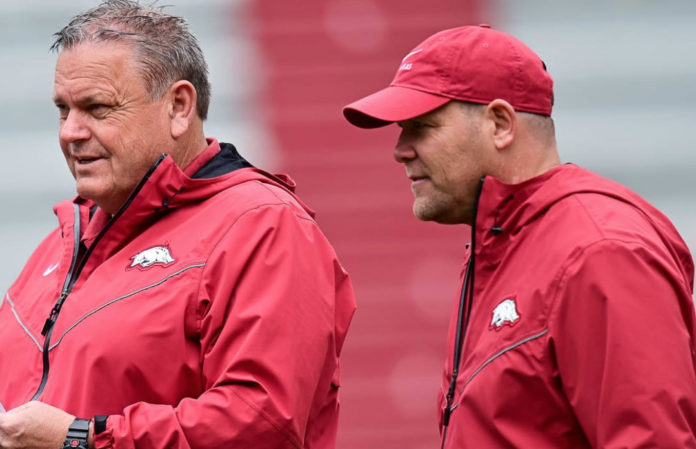 In December, a smarmy disaster-comedy called “Don’t Look Up” was released. The Adam McKay-directed flick about a comet hurtling toward Earth and mankind’s lack of interest in its own doom didn’t do much in the movie theaters but found a significant following online once it hit Netflix. “Significant” is the word of choice in that sentence as the film had both its detractors and supporters. The loudest in both camps were obstinate in their disdain for or admiration of it. Online, both camps went at it in a social-media-driven brouhaha.

Arkansas’ loss of two position coaches in two days is a lot like that madness, albeit on a much smaller scale.

Tom Murphy of the Arkansas Democrat-Gazette broke the news over the weekend that Razorbacks coach Sam Pittman was firing defensive line coach Jermial Ashley. Then, on Monday, various outlets reported that cornerbacks coach Sam Carter would be leaving the staff, as well, off to Ole Miss to become cornerbacks coach. One day later, multiples had Dominique Bowman coming over from Marshall to replace him.

In Ashley’s instance, Arkansas fans were defensive, many proclaiming Pittman did what he had to do and the Hogs would upgrade. In the case of Sam Carter, a lot of those same folks were aggressive, suggesting Carter a traitor of sorts for daring to leave the up-and-coming team for what they considered a downgrade or, at best, a lateral move.

Of course, that’s only if Carter was the one deciding to leave.

“If you have a coach that’s leaving for another position, for another school, at the same position around the same pay, it’s usually because that coach — the school that he came from and that coaching came from — either didn’t want him or they were that desperate to get out,” says Arkansas sportscaster John Nabors. “And with Arkansas, I don’t think any coaches are desperate to get out of the situation. I think it was more Arkansas is like, ‘Hey, we’re going to let you go. You’ll be fine. We’ll have somebody else step up and be this guy.'”

Much like any situation in which the reality of the inner-workings are not and cannot be known, the truth is in the eye of the beholder. Various theories have been bandied about for both.

Maybe Ashley was let go because he didn’t land Jaxon Player from Tulsa.

Maybe it was something personal.

Maybe more defensive backs other than Greg Brooks Jr. and Joe Foucha were going to the transfer portal if Carter didn’t leave.

Maybe his was personal, too.

On his “Locked on Razorbacks” podcast, Nabors discussed the widespread chatter that locker room trust in Carter had eroded and “the players didn’t really care for him and all that. Maybe he was setting a bad deal, a bad culture. And we know Sam Pittman’s all about having a positive culture and a good culture.”

“It seemed like maybe if those things were actually going on, again, I don’t know for sure, but if they were actually going on, then maybe there were some rumblings about, ‘Hey, he’s a good coach, but he’s not irreplaceable. Do we really want to possibly sacrifice keeping him on board if there are issues going on where we have so many good things going? Is that something we really want to fight for?'”

Who knows. But, also, who cares? The coaching profession is a nomadic one, especially for position coaches. Consider the case of Arkansas’ defensive line. The Razorbacks have not had the same coach at the position since Rory Segrest from 2014-2016. Each year, a new face. That doesn’t mean there was something ‘wrong’ with any of them. Consider, too, Pittman himself.

During one particular 20-year stretch, from 1995-2015, Pittman was at 10 different schools: Northern Illinois, Cincinnati, Oklahoma, Western Michigan, Missouri, Kansas, back to NIU, North Carolina, Tennessee and then Arkansas. During the latter part of that stretch, Pittman was considered one of the pre-eminent offensive line coaches in the country.

Coaches move on. Coaches are replaced. They move on. They are replaced. It’s the nature of the business. Such a nature is especially true now as the transfer portal has created an avenue for the players to switch. Coaches have always been free to do it and they always have.

To replace Sam Carter, Pittman could have gone a number of directions, including poaching former Razorback cornerback Kevin Richardson from former Arkansas football coach Bret Bielema. Richardson, as a class of 2017 graduate, is a bit young. Instead, Pittman opted for the more seasoned Dominique Bowman, who is about 9 years older.

Bowman, who spent a year at UA-Monticello, produced his most impressive season with Austin Peay in 2019 when he was a co-defensive coordinator and secondary coach. Statistically, those Govs defense ranked amongst national leaders in defensive touchdowns (11th), total defense (12th), turnovers gained (13th), passing efficiency defense (14th), scoring defense (15th) and interceptions (16th).

Bowman, by all accounts, appears to be a grinder – someone who loves to put in the extra hours. “I watched him climb the ladder from Arkansas-Monticello to UT-Martin to Austin Peay to Marshall and now to Arkansas,” said high school football coach Marc Cobb. “He’s a football guy. He doesn’t have any hobbies. He don’t hunt, he doesn’t fish, he doesn’t play golf.”

So not necessarily the kind of guy who would become best friends with the outdoors-loving Treylon Burks, but definitely someone who could recruit a Burks-caliber player in the future.

Chris Smith, football coach at Brownsville High in Tennessee, told Richard Davenport that Cobb will hit the ground running on the recruiting trail: “All the kids know him, all the coaches have built relationships with him. He’s definitely going to be able to have a recruiting impact down here,” Smith said. “He’s a great communicator. He calls, he checks in, he follows up. He asks what players you have. I really think he has an uncanny ability to connect with the players.”

Cobb, for his part, sees Bowman – who has significantly more experience than Sam Carter, who was a quality control analyst three years ago – as a potential replacement someone like Barry Odom one day.

“I look for Dominique Bowman, and you can quote me on this, to be a Power 5 coordinator in the next three years,” Cobb told Davenport. “He’s a grinder.”

Pittman has already proven that he’s savvy in hiring position coaches with the chops to possibly one day step into coordinator roles. It appears he did that last summer when he brought in Dowell Loggains, a potential future replacement for Kendal Briles should Briles land a head coaching job. Odom is just as likely to one day leave for a head coaching job as Briles, even more so considering Odom already has SEC head coaching experience.

Dominique Bowman has already been co-defensive coordinator at Austin-Peay and UT-Martin and is about to work closely with Barry Odom, who also coaches safeties as well as serving as the Razorbacks’ defensive coordinator. Pittman knows creating continuity within the Arkansas football program will be critical in future offseason where the churn will hit a lot harder than two position coaches.

Why shouldn’t he be thinking a move or two ahead with this hire? Regardless of intention, Arkansas “traded up” in terms of covering itself for an Odom departure by getting Dominque Bowman in place of Sam Carter.