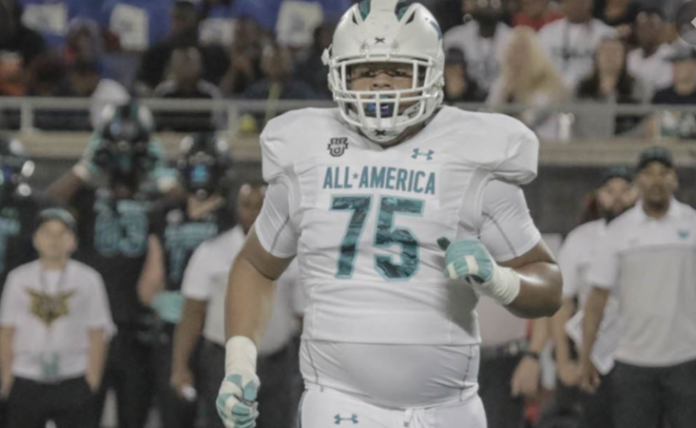 With early signings from prep stars like Myles Slusher and Darin Turner, the Razorbacks’ recruiting class of 2020 is ranked No. 40 in the nation according to 247 Sports.

That’s better than many would have expected given new head coach Sam Pittman has only been on the job for a couple of months. Still, with National Signing Day on Wednesday, there are a few potential signees who could push Pittman’s first class into the 30s and give Razorback fans even more confidence that the ship has finally righted heading into the 2020 season.

The top three quality (4-star) players who appear to be the most “warm” on the Hogs are Marcus Henderson, Rashad Battle and Malik Hornsby.  I’ll look at Henderson first.

Yes, the most overused cliche in football is “It all starts up front.”  But, you know cliches become cliches because they’re generally true.

He may come from the flatlands of the Mid-South, but he is a mountain of a man.

Marcus Henderson is 6’5” and weighs 300 pounds.  I wouldn’t want to get into a scuffle with him on Beale Street.  He played at the Memphis University School.  He’s a 4-star offensive lineman.  What else could we want?

Well, we wanted 5-star Broderic Jones out of Lithonia, Georgia who made a “soft” commitment to Sam Pittman while Pittman was still at Georgia.  He strengthened that commitment recently, so he’s pretty much off the board at this point.

Still, since Pittman last coached at Arkansas, the Hogs haven’t been used to landing blue-chip offensive lineman, so we’ll take what we can get.  And he’d be a good one.  Being from Memphis we’ve got a shot.  In fact, for Henderson, it’s down to Arkansas and Ole Miss.

“I think Coach Pittman will come in and have Arkansas right within the next two years,” Henderson recently said. “Coach [Lane] Kiffin is notorious for being that coach who gave Nick Saban a hard time when he first got into coaching at Tennessee. Both of the staffs have good track records of putting people in the NFL and it’s just connections at both schools.”

Henderson is the type of player who can give our quarterback (whoever it turns out to be) more time in the pocket to throw to Trey Knox, Treylon Burks and Mike Woods.  Even as a true freshman, he could open up creases for Rakeem Boyd.

Just think of Rakeem Boyd (who should be preseason first-team All-SEC) running behind a true SEC caliber line.

Very few freshman could waltz into Fayetteville and take playing time away from the playmaking quartet mentioned above.

Yet, outside of Knox, Burks, Woods and Boyd, every player at every position on both sides of the ball should be looking over their shoulder at the next guy.  When Sam Pittman goes into a recruit’s house and he says, “Hey, you can come in and compete immediately” he’s not lying.  He can say it with a straight face, especially as it relates to the offensive line.

If we can land Henderson, and others like him, our skill players will become far more effective.

But, he’s also been recruited by:

Nobody understands the need to have talent and, as important, be tough up front.  Most of us agree that when Pittman left the Bielema regime to join Kirby Smart at Georgia that the toughness Arkansas had in the beginning of Bielema’s stint at Arkansas went right out the door with him.

The base of beating the likes of Bama and LSU starts with talent and Henderson’s got it.  We need to beg, borrow or (*gasp*) steal to land this guy.

Read the latest on another top Razorback recruit here: