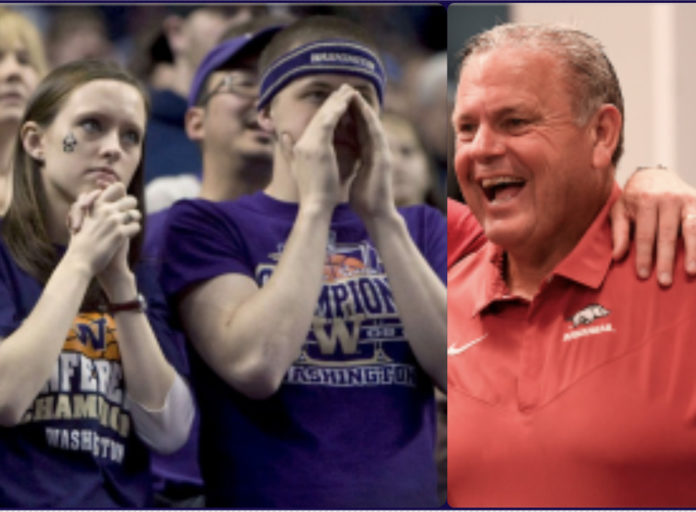 In 2017, the Washington Huskies’ athletic department had to give up one of its best coaches when Mike Neighbors left a program that he’d led to the Final Four to coach Razorbacks’ women’s basketball. Because of Neighbors, Washington’s greatest female basketball player, Kelsey Plum, also went to Fayetteville to serve as a Razorback graduate assistant for a couple of seasons.

Fast forward a few years, and it appears the Huskies may just hold a bit of grudge after all. Because on Wednesday, Washington’s athletic department tried to take one of Arkansas’ most impressive athletic accomplishment in recent years: the rise of all Razorback fall season teams that have so far competed into a Top 25 ranking in their respective sports.

This is the first time the Arkansas Razorback department has achieved such a feat:

The Razorbacks’ volleyball team especially has been on a tear, enjoying much more success than in recent years. A few weeks ago, it beat the then-No. 8 Washington Huskies 3-1, the program’s highest-ranked win since No. 5 Florida in 2007 and first top-10 win since 2015.

Even with such a recent loss on the ledger, the Huskies’ communications team apparently forgot to check out the Razorbacks when sending out the below tweet:

As you can see above, Razorback communications delivered nice little jab for a response.

Arkansas fans have also had a field day pointing out the error, and yet the Washington Huskies have let the erroneous brag stand.

Some of the confusion, perhaps, is that the Huskies have a different opinion of what “EVERY fall sport” means. Washington has an official men’s soccer team as part of the Pac-12 but apparently doesn’t consider schools which only have men’s soccer as a club team, like Arkansas, to qualify for whatever criteria their misbegotten self-congratulation is based on.

That shortsightedness would be a tad understandable if all major sport Pac-12 athletic departments had official men’s soccer teams, but even in that conference, major schools including Arizona, USC, Arizona State and the Huskies’ own in-state rivals Washington State produce only men’s soccer club teams:

Sure, Washington was recently in talks with the Big Ten to join that conference alongside Pac-12 defectors USC and UCLA, but things won’t get any easier to understand if Washington joins that group. Just like with the Pac-12, a few major Big Ten athletic department like Nebraska, Iowa and Illinois go the men’s soccer club route.

In short, the Washington Huskies have no good excuse to put down the pom-poms and give Arkansas credit where it’s due.

The No. 18 Huskies football team has gone 3-0 this season and hosts Stanford on Saturday, while the No. 10 Razorbacks tackles Texas A&M in Arlington. Here are some excerpts from Sam Pittman in press conference this week:

On where Arkansas vs Texas A&M ranks as a trophy game for the Razorbacks:

“Well, I think it’s a big rivalry for us. I think anytime you’ve lost nine of the last 10 games, I can’t speak for A&M but it means a lot to Arkansas because we haven’t been on the winning end of it. Certainly, nine out of 10 they’ve beat us. But, it’s a trophy game. As you well know, it’s a big deal for us to win any of those trophy games. It’s a huge deal. We’ve gotten the trophy out this week and things of that nature. Obviously, we’ve got to take it down there. We certainly want to bring it back. It means something to us. It certainly does.”

On Beaux Limmer, who grades out as one of the nation’s top offensive linemen:

“He’s strong, and he cares, and he’s got the reps to feel confident. He’s always had the athletic ability. So, he’s playing really well. He really is, and I think he’s comfortable in there between Wags [Dalton Wagner] and [Ricky] Stromberg. It says something about guys consistently playing next to each other, they kind of understand.”

“I had a kid one time, and he told me that his Pro Football grade was about 8% higher than what my grade was. And he got done griping at me a little bit and I said ‘Well, tell your mom hi for me. She she works for Pro Football Focus, right?’ I had a good time with him on it. I don’t know if it was his mom or his uncle. I think I might’ve said, ‘Well, tell your uncle hello for me. He works for PFF, doesn’t he?’ And he got my point. But, listen, they’re a good program, and we use them too. We use them for statistics.”

On the improvement of defensive end Landon Jackson:

“Getting quicker off the ball. You’re never worried about a D-lineman that won’t punch in the mouth. I mean, you don’t worry about him. In other words, he doesn’t have that quick twitch, that hip roll, to move you as an offensive lineman. And when he first got here, he didn’t play near as fast as what he is right now. And now you’re seeing him jarring some tackles, jarring some tight ends. He’s always been able to run too, now.”

“It’s like, why does a guy-I don’t know this, but I’m thinking, ‘Why does this guy run a 400 meter versus 100 meter?’ Well, maybe it’s his start. I don’t know, but maybe it’s his start. And in football, it’s the same way. The most important thing in my opinion as a defensive end is to have the body frame, but you have to get off the football. And I think that’s the number one thing that he’s improved on since he’s been here.“