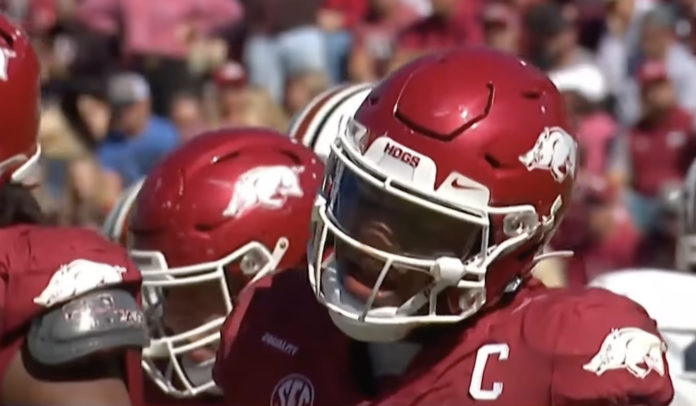 They are, in fact, Dennis, who we thought they were.

Just one short month ago, the stories flooded the Twittersphere, the World of Facebook, the ever-present water cooler: Arkansas football was back. Razorbacks head coach Sam Pittman had done the unimaginable. He had taken Arkansas from its lowest of lows to the highest it had been in more than decade and he did it in less than two full seasons.

We call those ‘the good old days.’

Sports have always been a what-have-you-done-for-me-lately venture, especially among we fans and talking heads. But with the proliferation of social media, instant-analysis and, frankly, misinformation, we – all of us – have a tendency to over-exaggerate, to get ahead of ourselves, to stretch the truth into what we want it to be.

Now, the reality is we’re left wanting. The Razorbacks have lost three straight games after a 4-0 start, each a touch more painful than the last. Auburn was outplayed by Arkansas on Saturday and still the Tigers left a sold-out Donald W. Reynolds Razorback Stadium on homecoming with a 15-point, 38-23 win, leaving us with the sad words of former Cardinals coach Dennis Green echoing through heads.

To his credit, as always, Pittman took ownership of the loss. But even he is scratching his head on just how things have become what they have become.

“He (Auburn coach Bryan Harsin) out-coached me. He had his team ready and obviously I didn’t have ours,” Pittman said. “I’m looking back, I’m sitting in there trying to figure out what we could’ve, might’ve done differently during the week. We certainly have to figure it out.”

But that Georgia game’s 38-point shutout loss should have tipped off more than it did. Perhaps instead of proclaiming how good the Bulldogs were to have beaten the Hogs like that, we should have noticed something about ourselves and our team.

None of any of this is to say Arkansas is a bad football team. Nor is it to say Sam Pittman isn’t the right coach. Hell no. It isn’t either of those things. No, this is about us, about our perpetual anger/frustration/heartbreak and it’s about how we inflict it on ourselves.

Arkansas hasn’t changed, really. It feels like the Razorbacks have, but that’s largely because they underwent such a drastic makeover under Chad Morris (and, if you want, the last season of the Bret Bielema era), that anything felt like an improvement.

The optimist can say “If you’d have told me this team would be 4-3 after seven games, I’d have been over the moon.” Probably so. This isn’t about whether Arkansas is good or not, though. It’s the suffering and the way it’s happened over the course of the last three weeks.

But between the strip-sack touchdown, the missed fourth-down conversion from the Auburn 30 and the over-the-top touchdown pass in response, the Tigers needed, basically, just three plays in a game they were otherwise, largely, the inferior team.

And it was still a two-touchdown win.

Arkansas didn’t play badly, which makes it all the more difficult to swallow. As it goes, the Razorbacks simply didn’t catch any favors. A phantom pass-interference call on Hudson Clark. Nathan Parodi losing the punt in the sun. The flukey strip-sack score. A curious spot on Rocket Sanders’ fourth-down run.

To us, fans and media, those things linger in the air. They’re reasons the Hogs lost. To Pittman, they’re excuses. And in the scheme, he’s right. Things will go awry and Arkansas, to be the elite team it wants, the nearly-elite team we thought it was about to be, has to overcome them. Because they will happen again. And again after that. And again after that.

Razorbacks and the Top 25

The Razorbacks will likely find themselves out of the Top 25 when the polls are released on Sunday. If they’re not out, they’ll be on the verge. A win against Arkansas-Pine Bluff next week won’t do much to change the Razorbacks’ standing after that and a bye week follows. Arkansas will close the season with four straight SEC games from sadly familiar territory: last in the SEC.

In a down year for the best conference in college football, it stings, especially as Arkansas’ last two games could have – should have – been wins. Instead, the Razorbacks have to fight off Mississippi State at home, swing a road win in the The Swamp against LSU, try not to get smoked against Alabama in Bryant-Denny and, finally, snap a five-game losing streak in the Battle Line Rivalry against Missouri.

Arkansas tried to snap a five-game losing streak to Auburn on Saturday. It didn’t happen. Now they have to do what we fans and scribes often cannot: put it behind them.

“It’s bad because we had such a big start to the season now we’ve lost three in a row,” Pittman said. “That’s on the head football coach. I’ve got to figure out why. I think I’ve got reasons why. But, yeah, it gets frustrating. You’d like to catch a break here or there. I don’t know. It gets frustrating.”

*Big plays are defined as passes for more than 15 yards or runs of more than 10 yards.