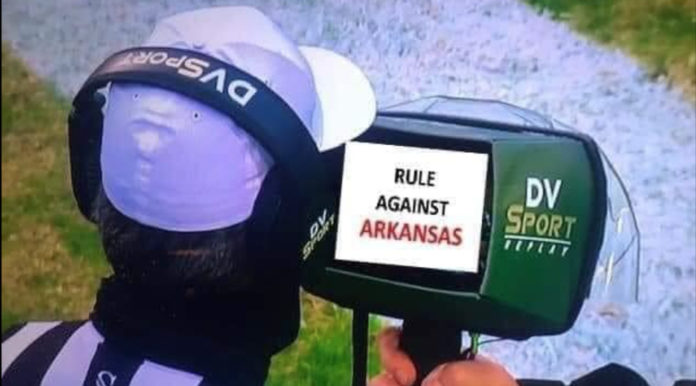 When your team loses, I don’t really want to hear you say, “The refs were against us.” Or this gem: “The announcers don’t like us.”

Both of those statements are lame and reek of sour grapes. Although I’m still convinced Joe Buck, a St. Louis native and son of legendary St. Louis Cardinals play-by-play man, does hate my Chicago Cubs. I know in my core it pained him to call the Cubs’ epic Game 7 World Series win at Cleveland which snapped a 108-year World Series drought.

But that is fact and also fact is that as my dad, an Iowa State alum says, “Iowa State hasn’t gotten a call (in any sport) in 50 years.”

Besides these two exceptions, almost all the other fan moaning and groaning over the supposed talking head and stripes bias is lame.

However, as I watched CBS’ coverage of Arkansas’ game at Alabama Saturday, I threw up in my mouth a lot. The bias that is shown toward the mighty Crimson Tide is pretty ridiculous  – both in the CBS booth and by the officiating crew.

I have been a big fan of CBS play-by-play lead Brad Nessler dating back to his days at ESPN. His voice is smooth and his calls on point. When Nessler took over for longtime CBS icon Verne Lundquist on the CBS SEC broadcasts, I was all for it. Color analyst Gary Danielson has also been a favorite of mine, although I know he’s drawn criticism from many SEC fan bases. Like when he said this during the Alabama/Florida game earlier this fall. “So far in this game it just appears like the Alabama athletes are just better than Florida’s athletes.”

On Saturday, if Arkansas fans complained about the broadcast crew leading a Bama pep rally, I’d pretty much agree with that. It’s almost feels at times like viewers are watching a Bama broadcast crew. Especially, when it comes to Alabama Coach Nick Saban.

The duo did give Arkansas coach Sam Pittman credit and when Arkansas was hanging around in the fourth quarter, pumped up the finish of the game (like they are supposed to), and tipped their cap to Hogs junior receiver Treylon Burks as he battled through injuries to have a stellar day. However, the overall tone of the broadcast just slants toward Bama. Which it does for pretty much any game, regardless of Alabama’s opponent.

I will say that Danielson did draw the ire of Tide fans when he had the audacity to suggest the Bama defense may have trouble with the clap to signal the snapping fo the ball. Also, Hogs fans were amazed that Danielson questioned the SEC officials on their spots of Arkansas first downs and a review of a touchdown that clearly was just that.

At any rate, from their tone to the love shown for Saban, if they really aren’t biased toward Bama, they must know that the lion’s share of commentary at least has that appearance. I am aware that the Tide’s dominance makes it hard not to laud them at every turn, but do they really need to play the clip of legendary Tide announcer Eli Gold at the end of the game? Would they have done that with Chuck Barrett’s call if Arkansas had won? Also, it was very awkward when Danielson said “ass” twice referring to the Hogs’ working theirs off, while Nessler was trying to distance himself.

And then there was the officiating. Let’s face it. SEC officiating is bad. For a league that brags about how good it is, the officiating is God-awful, any game, any two opponents. But, on this Saturday, even the unbiased observer would have agreed that Alabama received the benefit of the doubt. That was clear as day at the end of the first half as Danielson brought up Arkansas’ spots and the touchdown call that was clearly a touchdown and didn’t need a review.

Later in the game, the officials ruled Alabama receiver Jameson Williams’ bobbled effort in the back of the end zone a catch and touchdown. The replay booth confirmed, even though it appeared Williams was still trying to secure the ball when he fell out of bounds. That was the backbreaker for Arkansas because it put the Tide up two scores. If the booth had reversed the call, it would have brought up fourth down. You really wonder if the situation had been reversed, would Arkansas have gotten the ‘catch’ call? I’ll let you answer that one.

It says a lot about the officiating that Danielson, despite all the perviously mentioned bias, was still criticizing it for not going Arkansas’ way during that first half.

“Just a few of those obviously controversial calls that were in that game, it raises some questions, for sure, I guess, unless you’re an Alabama fan,” he said. “That’s just part of the game. We’ve discussed it over and over and over. That’s not going to change, no matter what happens. It was a good game, for sure,” Nix told The Next Round.

“I think, legitimately, you watch the game and anybody who is unbiased would think something is different,” he added. “It is what it is. It’s kinda how it has always been. It’s part of the game. And they have good players. Can’t take that away from them.”

Man, it sure says something about the depth of his issue when the same quarterback who clearly benefitted from SEC referee bias in the 2020 Arkansas game decides it’s bad enough to call out another program on it.

The SEC is Alabama’s league as long as Saban is the coach. They get the nod from everyone from the league office (based in Alabama), to the broadcast boot to the officials. There is talk that even if the Tide loses to Georgia in the SEC Championship game they will be a part of the College Football playoff with two losses. No wonder other fan bases around the country hate the Bama and the SEC. At least they don’t have to watch their teams play them on a regular basis.