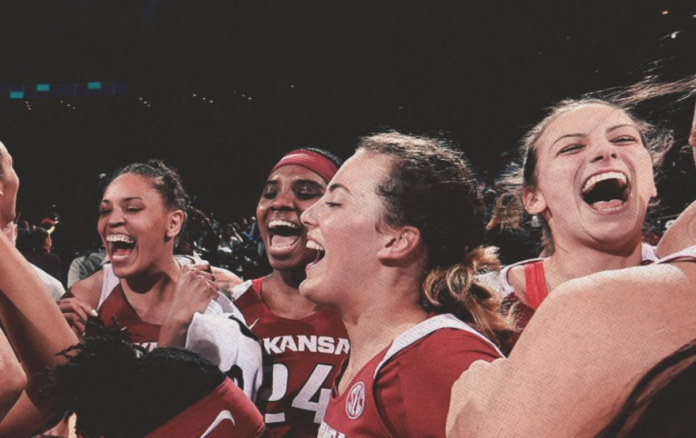 That future sure is getting here in a hurry.

On Sunday, his Razorbacks blitzed UAB by 48 points, the largest margin of victory in Razorback postseason basketball history — in men’s or women’s. The Lady Razorbacks made a program-record 15 3-pointers, shooting 15-for-30 and 37-for-72 (51.7%) overall from the floor for the game. Arkansas, the home team, built up a 52-22 lead by halftime and only added to UAB’s misery after that. Arkansas scored 31 points in the third quarter alone.

You can witness the carnage here:

This slaughter eclipses the 41-point beatdown Nolan Richardson’s 1991 Razorbacks put on Georgia State in the first round of March Madness. That squad, featuring Todd Day, Oliver Miller and Lee Mayberry as juniors, ranks with the ’94 and ’95 teams as the most talented and powerful in program history. It finished 34-4 overall and No. 2 in the nation. The ’91 Hogs went into the NCAA Tournament as the No. 1 seed in the Southeast regional and won three games before bowing out to Kansas in the Elite Eight.

Here’s sweet, sweet evidence of those vintage “40 Minutes of Hell” Razorbacks in their Sweet 16 win against Alabama:

The above action came in Nolan Richardson’s sixth season as Arkansas’ head coach. Mike Neighbors is only in his second season, but his program is already starting to show early signs of developing the kind of overwhelming depth and offensive power that made Nolan’s early ’90s Razorbacks so special.

Just check these stats from the UAB rout:

• Five Razorbacks put up double digits in scoring
• Arkansas’ 22 wins is the program’s first since 2011-12.
• Jailyn Mason has scored in double figures in 6-of-last-9 games.
• Arkansas held UAB to 10 points in the first quarter. It is the third time this season Razorback opponents have been held to 10 or fewer points in the opening frame.
• Alexis Tolefree had eight rebounds for a career-high.
• Arkansas led 52-22 at the half. The 30-point advantage is the best of the season.
• Arkansas played 12 players and everyone scored in the game.
• Post players Kiara Williams (8 pts, 7 reb) and Taylah Thomas (3 pts, 6 reb) played 30 minutes helped Arkansas win the rebounding battle, 52-37, over UAB.