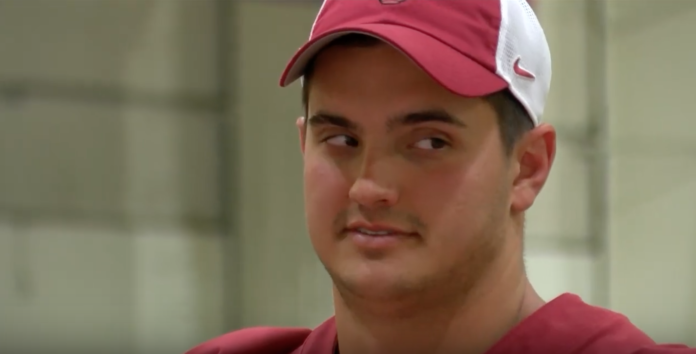 Pro Football Focus, for the most part, is a respectable football media outlet. The pigskin-inclined eggheads who write for it do tons of film watching and analytical number crunching. Arkansas media types, including yours truly, often cite PFF as an authority.

But the fine big brains at Pro Football Focus might’ve bitten of more than they can chew by attempting to accurately rank all 130 starting quarterbacks at FBS schools heading into the 2019 season.

In their list, the PFF analysts tabbed the usual suspects up top: Jalen Hurts, Jake Fromm, Trevor Lawrence, Tua Tagovailoa and Mason Fine, that North Texas quarterback who roasted the Hogs in 2018.

Then, at the bottom, is scrap metal from places like UMass, New Mexico State and South Alabama. Hog fans know that their top two quarterbacks heading into the season aren’t the best of the best — or else they wouldn’t have transferred in — but most would not expect them to be pushed to the back of the line in such a comprehensive ranking.

Yet that’s essentially what has happened here.

No. 102, y’all. That’s where PFF has pegged the Hogs’ quarterbacks:

“On one hand, Hicks has raised his grade in each of the past three seasons. On the other, his career overall grade drops from 64.6 against all competition all the way down to just a 39.0 against Power-5 competition. He’s got a ways to go in terms of playing up to his opponent and he’ll have to prove that in SEC play this year. Starkel had a fine season at Texas A&M in 2017 but lost that job to Kellen Mond and if he cannot beat out Hicks for the Razorbacks’ job, that 2017 seems to be becoming more of an anomaly with each passing day.”

If Pro Football Focus truly has 101 teams with quarterback situations better than Arkansas, that would be one thing. Instead, it appears they’re throwing darts at a board.

Why else would PFF rank the quarterback who left Fayetteville because he struggled so much last season, Ty Storey, ahead of Hicks and Starkel? PFF has Western Kentucky’s quarterbacks, Ty Storey and Steven Duncan, ranked at No. 100:

“Storey has yet to separate himself from the duo here even after coming over from Power-5 Arkansas. Storey’s 58.8 passing grade from his final season with the Razorbacks showcases likely why but he still has the slight advantage over his counterpart. Duncan’s best two outings came in limited snaps a season ago, seeing season-high grades in games in which he attempted fewer than 15 passes. Still, his 57.7 overall grade ranks 104th out of the 119 quarterbacks with at least 100 dropbacks last year.”

Ok, it’s true that Hicks struggled more against Power 5 schools, but so did Storey. Again, that’s why he left Arkansas. Plus, when it comes Starkel, what evidence is there that Nick can’t recapture some of that magic of 2017? He had no debilitating injury, nor does it appear he’s sustained any kind of brain damage (In case you’re wondering about that, his love of Justin Beiber existed in the 2017 season).

Compare that to what Nick Starkel did in 2017, when he got the most minutes of his career so far. When it came to SEC opponents, it’s clear Starkel was the better performer overall:

Ranking Arkansas at No. 102 would be more understandable if this were going into Year 1 of the Chad Morris era, but not going into Year 2 with all the acclimation to the system the program has undergone. Especially with Ben Hicks being so familiar in his system after three years at SMU.

What about Western Kentucky’s Steven Duncan, you ask?

The only appropriate response here is “Psssh.” In 2018, dude completed 58% of his passes for 1,071 yards and nine touchdowns, “compared to only seven interceptions,” as his WKU bio somewhat hilariously puts it.

In Duncan’s only game against Power 5 competition (Louisville), he vomited out three of five passing attempts for 20 yards and an interception.

There’s one silver lining in all this.

This is prime-time bulletin board material for Nick Starkel and Ben Hicks. These two competitive young men are vying for a starting spot. As you can see in the video below, both have openly said they’re aren’t pals, but that doesn’t mean they can’t work together — by competing against each other — towards a common goal.

Proving the folks at Pro Football Focus wrong en route to winning ballgames for Arkansas is a great start.