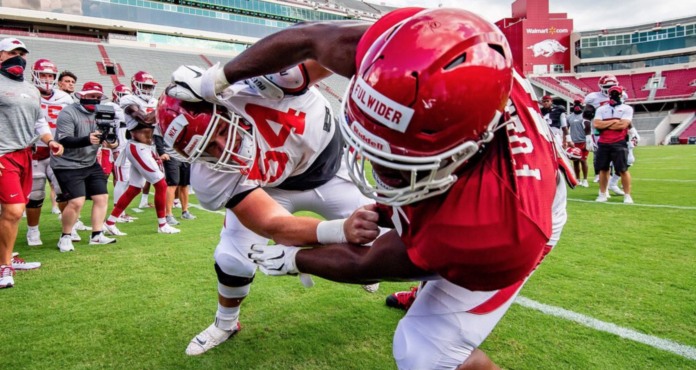 “Experts” pick the Arkansas football team last in the SEC West.  Even ADG columnist Wally Hall picks Arkansas 6th out of the 7 teams that make up the West.

I’ve already laid out reasons that we can beat Georgia, so I won’t go any deeper except to say that we need to catch them sleeping in order to win.

But I do predict that as a win. So let’s look at the rest of the schedule.

The talent is roughly equal between MSU and Arkansas, but we have the edge in experience.  More importantly, we’ve got some swagger in our step.

At this point, Hog fans will be yelling “Bring on ‘Bama!!!!’” while they wave styrofoam index fingers with the glint of a win-starved maniac in their eyes.  Of course, any celebration of national or SEC championships at this point is foolhardy.

The Hogs arrive in Auburn with two pelts already hanging on the wall.  We’re feeling good about things.  But, sadly, we suffer the end of the honeymoon at the hands of Gus Malzahn.

Back-to-back road trips and Malzahn’s hurry-up offense under the jittery guidance of Auburn’s new Red Bull-swigging O.C. Chad Morris will take a toll on the Hogs’  legs. In the same way Pittman’s intel against Georgia will help Hogs in Game 1, Morris’ intel against Arkansas in Game 3 will prove pivotal.

Hogs have similar talent, like MSU, but still have some swagger from being 2-1.

With a 3-1 record, the Hogs get a week off. Then they head to College Station.

The last time we beat Texas A&M was during the Eisenhower Administration.  A&M has won 7 of the past 8 meetings. ,

If that’s not enough, they’re loaded with 15 starters back including Kellen Mond, the quarterback who has ripped Arkansas a new one (seemingly for more than a decade) every year that he’s been there.

Hogs will be 3-2 heading back to Fayetteville for a game with Tennessee.

This should be interesting.  Tennessee was pretty good last year, but played a weak schedule.

They return 5 on offense and 6 on defense.  They also will have just been hammered by Alabama.  Thank you Alabama — ROLL TIDE!!!!

This is a winnable game, but I wouldn’t bet the house on it. Let’s just chalk this possible victory up as a half win.

There’s just no way to tell how Hogs quarterback Feleipe Franks will react on the road against his old team (which, of course, will know his tendencies).

I’m expecting a big game out of some big-time players, but I don’t think we can beat Florida.  Florida is the favorite here for a reason.

It really depends on whether LSU beats Alabama the weekend before.  If Bama beats LSU, LSU will come in so dejected that we’ll have a chance.  This has happened before.  Hey, when you get knocked off the rails of the championship train, things can go wrong from there.

First, congratulations to Missouri for moving this game up the road to Kansas City.  It adds a little something to the match-up.  I love the idea of playing games off campus, but not at the same venue (Jerry Dome) every single year.

Only 9 of the starters return from last year’s team that beat us by 10 points.  Barry Odom knows his old team well and will game plan accordingly.

OK, the “ROLL TIDES!!!” will finally cease around these parts.

If at any point during the game it looks like Arkansas could make a game of it, rest assured the calls will start going against us.

In all, I’m looking at four, possibly five, wins this year.

Yes, that’s a huge success compared to where Arkansas was in the last few years.

But it’s not going to push into title contention, which of course is the reason these great new coaches came here.

If we lose to the Georgias, Alabamas and LSUs of the world, it’s fine for now.  What’s not fine is losing to the teams you should beat.  Our real test this year will not be about how we fare against Alabama and Georgia, but against Ole Miss, MSU and Missouri.  Those are the teams we’ll have to climb over if we want to get within striking distance of a championship of any kind in future seasons.

Knocking off Georgia sure would be one of a helluva start, though.  Who knows? Saturday could be the beginning of a return to Razorback glory!!

Yes, I actually think Arkansas can beat Georgia. Here’s why:

For even more analysis, go here: