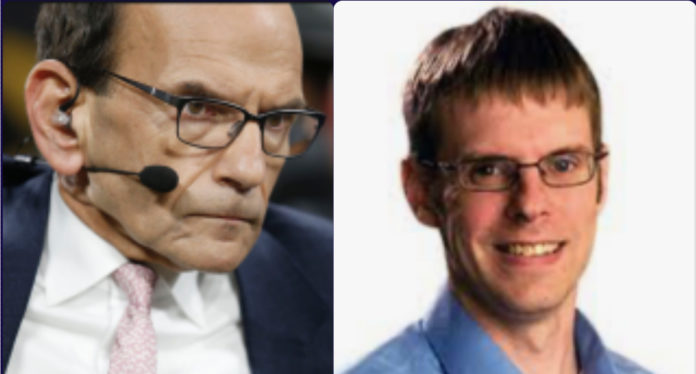 The well-known SEC sports radio host has been plenty critical of the Razorbacks in the past, and he will no doubt continue to be so in the future.

But the former investigative reporter also usually tries to base his wide-ranging opinions on the facts as best as he sees them, even when that puts him crosswise with his own guests.

That’s exactly what happened in a recent interview on “The Paul Finebaum Show” when he made a point of defending Arkansas football coach Sam Pittman.

Finebaum’s guest, Bill Bender of the Sporting News, had spearheaded a ranking of all 130 head coaches in the Division I Football Bowl Subdivision.

A six-personal panel for the Sporting News picked the top 25 coaches based on projected success in 2022. It includes a top 12 that is reasonable enough if you take the success the coach’s team had in 2020, the returning roster and what is probable to happen in 2021:

Things get a bit dicier after the Top 25.

That’s in part because Bender, who serves as an associate editor and national college football writer for Sporting News, also apparently decided the rest of the list by himself.

Although Bender ranked Sam Pittman at No. 56, a full 24 spots ahead of last year’s ranking and just ahead of Jeff Monken (Army) and Jeff Brohm (Purdue), Paul Finebaum felt like that was still not as high as it should have been.

“I thought he did a great job last year,” Finebaum said of Pittman.

“I thought he shattered what had been done previously [by Chad Morris] and it just seems like a rather low ranking.”

Bender then replied that, despite all the good vibes around Pittman, when it was all said and done the Arkansas football program still came out of 2020 with a 3-7 record (that should have been a 4-6 record if not for the Auburn game).

To which Paul Finebaum countered that if these rankings are based off of 2020 records, then no expert analysis or insight is needed. All that would be needed in that case is a list of 130 teams ranked by winning percentage in 2020.

While Pittman clearly has Arkansas football on the rise, especially with the return of so many super seniors, some coaches ahead of him appear to have either stagnated with their programs — or even started to slide.

Paul Finebaum believes the below three head football coaches, in particular, are questionable to be ranked ahead of Sam Pittman given their 2020 seasons and an overall downward trajectory of their program.

He considers all three to be “headed for the unemployment line.”:

Scott Frost hasn’t done too well at his alma mater since leaving UCF in 2017.

In three seasons he’s totaled a mere 12 wins against 20 losses, making him the first Nebraska coach to post losing records in each of his first three seasons since Bill Jennings from 1957 to 1959.

Bender made the point that Frost was dealt a bad hand in terms of what he inherited before stepping into the Huskers job, while Paul Finebaum essentially said all we can do is judge him on his what he’s able to do with the players he has (not what he did previously at UCF).

“I just don’t know how, when you look at a guy like Scott Frost and you see the trajectory, which is straight down, you can still have him ranked at a reasonable number,” Finebaum said.

That’s not a “reasonable number if you’re a Nebraska fan” with high expectations for the program, Bender added, though it should be added that Arkansas’ expectations are every bit as high as Nebraska’s.

Given Arkansas football’s upward trend most of the last year and a half (outside of an Alabama blowout), Pittman cracking the top 50 makes more sense than Scott Frost doing the same.

Like Frost, Chip Kelly has seen much better days.

The shine from his stint as Oregon’s offensively innovative ringleader is all but gone with a 10-21 overall record at UCLA. Yes, in 2020, the Bruins had three “quality” close losses against Oregon, USC and Stanford, but it’s clear the Kelly mystique is running on vapors.

“I will straight up admit it when he was hired, I called him, like everybody else… a home run hire,” Bender said. “[I wrote] his offense will take off.”

Bender thinks that with the right quarterback that’s still possible.

But if it hasn’t happened yet in three seasons, good luck seeing things truly take off in 2021.

It started well enough, that’s for sure.

In 2016, Fuente led the Hokies to Belk Bowl win against the Razorbacks after overcoming a 0-24 half-time deficit. That went down on Bret Bielema‘s Mt. Rushmore of losses as Arkansas’ football head coach.

Fuente, however, hasn’t been able to replicate the success of that first 10-year season and it looks like the Virginia Tech program may be stalling after a 5-6 year in the ACC in 2020.

In retrospect, Bender conceded putting Fuente this high was likely a mistake.

“If I could rewrite them, maybe I should push Fuente back, because that’s the one that I thought would work out better than it has. The last two seasons have been a little bit raw.”

Pittman’s doing a lot better in national coach rankings this summer across multiple outlets when compared to last summer, but he’s still underrated on a national scale. Bender’s ranking of downward trending coaches like Fuente, Kelly and Frost shows that.

Paul Finebaum, as annoying as some Arkansas football fans find him, deserves credit for not only pointing this out — but holding a national columnist’s feet to the fire on live radio for it.

Listen to the entire interview below