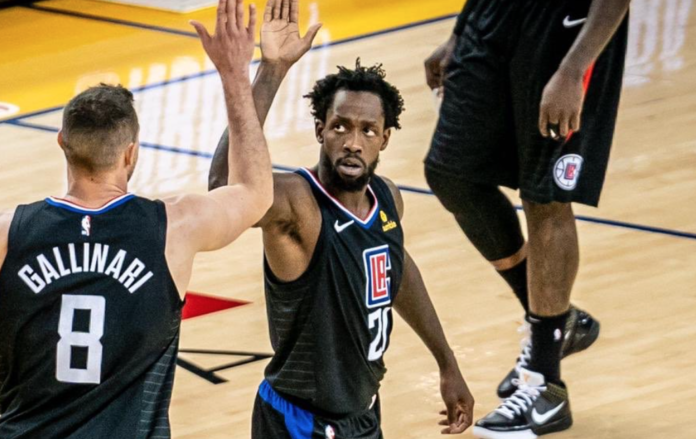 It was supposed to be another ho-hum Golden State Warriors blowout.

Halfway into the third quarter, the back-to-back NBA champs had former Razorback Patrick Beverley’s Los Angeles Clippers on the ropes. Actually, with a 31-point lead, they had them out of the ring, lying on the arena lobby.

Then, the tides started shifting like never before seen in a postseason NBA game. Early on, Patrick Beverley did what he’s been doing so well against Kevin Durant all series long: get into his mind, start a nice little fire, put up the tent.

This offensive foul drawn on Durant was big:

By the fourth quarter, that fire was roaring. And it wasn’t just Kevin Durant seemingly going up in flames. It was the entire Warriors squad on their home court. Beverley threw some more gasoline over the scene with one of this trademark steals:

Even though he ultimately fouled out, his Clippers kept surging and in the end won 135-131. They finished on a 72-37 run to wrap up the largest comeback win in the NBA playoff history.

Patrick Beverley wasn’t the statistical star of the night. That title belongs to the likes of the Clippers’ super-sub Lou Williams. Beverley’s line was only 10 points, 5 rebounds, 2 rebounds and a steal.

But Beverley has proven to be a spiritual and emotional leader, someone whose energy is helping his teammates — and Clippers fans worldwide — believe the impossible just may be possible. You can see that passion right here:

So, now the series heads south to Los Angeles. Can the underdog Clippers actually win the entire thing? It’s too early to tell. But one thing is clear: the Warriors won’t be getting a sweep, as this Deadspin headline after Game 1 predicted:

That beef becoming fun part, though, is definitely in full effect.

In Game 1, both players were ejected after getting into it while going after a loose ball. After that game, Warriors coach Steve Kerr talked about Beverley’s ability to get into opponents’ mind and get them to lose self-control: “He’s a hell of a defender, he plays hard, we’ve got a lot of respect for him. But you can not take the bait because, you know, that’s a bad trade for us. Clippers have made a lot of good trades this year and that was maybe their best.”

After Game 1, Durant said he holds no ill will to Beverley, though Beverley had mocked him. “I love Patrick Beverley,” he told NBA Sports Bay Area.

“I’ve been playing against Pat Beverly since he was at Arkansas, so I kind of know what he brings,” Durant said minutes later in the postgame press conference. “He’s a Chicago kid, grew up and played in the Chicago area, so those dudes play with a different type of grit, so I can appreciate that about Pat. You know what he’s going to bring to the table, just physically mucking up the game a little bit with his physicality. That’s what he brings to each team he plays on.”

For those who have forgotten, the game Durant mentioned was an 80-76 loss by the Razorbacks in December 2006, during both players’ freshmen season.

To see the clips from this amazing game, make sure to check out the below: