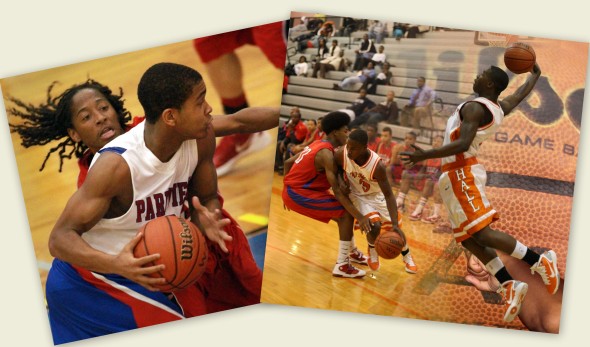 The Friday Night Lights will burn bright between these two Top 5 teams and heated rivals. For sure, guards Anton Beard (left) and Jobe Dillard (right) will be ready. Will you? Photos courtesy of Arkansas Democrat-Gazette and Tom Harden of Little Rock Hall High

There’s a lot of stuff online about central Arkansas high school basketball. I’m one of the few people eager to actually wade through it all. I did so, and give you essential previews  of Friday’s big games in 6A and 7A:

As good as it gets in Arkansas hoops. Detailed breakdown at  ARPreps.com Prepscast. Also, Buzz 103.7 FM will broadcast the game as its featured matchup of the week.

The 74 points are the most the Patriots have allowed this season. No other Arkansas team has scored more than 60 on Parkview (13-1, 1-1) this season.
Jacksonville (11-3, 1-1) led 18-9 after one quarter and 40-23 at halftime.
“I can’t remember when someone jumped on us like that, especially at home,” Parkview Coach Al Flanigan said. “We didn’t play any defense, but I give Coach Joyner’s crew a lot of credit. They played well…  Parkview sophomore Anton Beard led all scorers with 27 points and he also made six steals. Junior guard I.J. Ready was held to 14 points and Emmanuel Adoyi added 10 points and grabbed 10 rebounds. ” – Tim Cooper, via ARPreps.com

[Arkansas signee] Melissa Wolff and the Cabot Lady Panthers warmed up for Friday’s showdown with North Little Rock by winning at Mount St. Mary 66-38 on Tuesday in Little Rock.  Wolff scored a game-high 17 points and came up with five steals and four assists for the No. 5 Lady Panthers – Tim Cooper, ArPreps.com basketball

A key for NLR was the defensive play of LaShaun Brooks, who shut down Chambers the second half.

“That was big for us,” said NLR coach Daryl Fimple. “She’s capable of playing that kind of defense.”

The Wampus Cats were forced to go outside for most of their points and their shooting was inconsistent. Garan Davis led Conway with 12 points, Kevin Guiden added 11 and Tim Boyd eight. via Log Cabin Democrat

Devan James led the Tigers with 14 points, while Keith Hayes and Terrance Jones added 12 and 10 points, respectively. – via The Courier

Russellville will travel to Bryant on Friday for a conference matchup with the Hornets. Tip-off is set for 8 p.m., and the game can be heard on KCJC 102.3 FM. – via The Courier

Searcy will also be without senior starter Dezmond Stegall, who netted 22 points and 10 rebounds in Tuesday’s win, because he will be on an official visit to Florida International University. – via The Daily Citizen

Statistics and scoring information courtesy of a radio broadcast by KTLO-KCTT Radio.

“It’s just another game in the 6A-East,” said Victor Joyner, whose team jumped out to a 18-9 lead after the first quarter and cruised the rest of the way against the previously-unbeaten Patriots. “We have to get ready to play again. We have to get ready to play Friday. If this were the state tournament, yeah, I’d say this was a ‘wow’ moment.
“Don’t get me wrong, we’re excited. When you beat them, at Parkview, that’s huge for us. And I want our kids to enjoy, but it’s time to get to get back to work after that.” – ARPreps.com

Quentin Williams made the only overtime field goal and Rickey Clements added two free throws to help the Zebras (8-3, 2-0 6A-South) overcome missing multiple shots throughout the game. The only point for the War Eagles (6-6, 1-1) in overtime was a free throw by Kentrell Adams.
“You’re not going to make every shot, but that’s the first time I’ve seen them miss like that,” Pine Bluff Coach Ron Moragne. “We did a good job on the boards, but you gotta make the second chances. It doesn’t matter if you have 100 rebounds if you can’t make a layup”… Darrian Kee led Pine Bluff with 12 points, while Williams had 11 points and nine rebounds. – ARPreps.com

The Arkansas Activities Association will decide during a meeting Thursday where this year’s high school postseason basketball tournaments will be held. Four schools have submitted bids to host the Class 5A State Tournament: Greene County Tech, Greenwood, Siloam Springs and Watson Chapel. Five schools are vying to host Class 1A State: Calico Rock, Izard County, Jasper, Nevada County and West Side Greers Ferry. Concord and Mulberry are the only schools that submitted bids to host the Class 1A Region 4 Tournament. The AAA will also award bids for baseball, softball and soccer tournament sites.