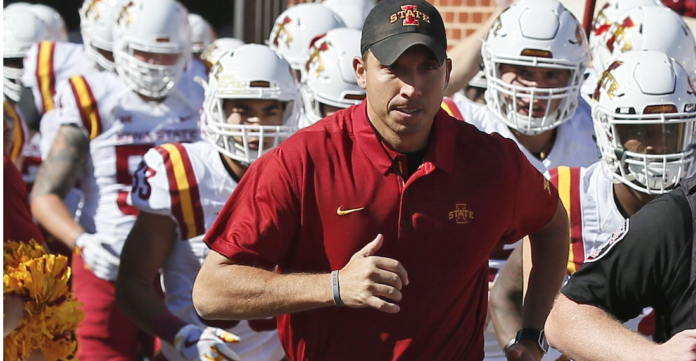 When it comes to the search for the next Razorbacks football coach, few people outside of Hunter Yurachek and Jon Fagg (assistant athletic director) know what’s really going on.

Some insiders, however, have better insight than others. Count longtime Razorback reporters and broadcasters like Mike Irwin, Otis Kirk and Trey Biddy among them.

Multiple media outlets have released multiple lists of top candidates for the new Arkansas football coach, but one to which Hog fans should be pay special attention came out Wednesday..

“Hunter Yurachek and Jon Fagg apparently have done a similar job with the football search that they did with basketball if the sources are correct on how this likely ends,” Otis Kirk .

Kirk then said the below three choices will likely constitute the final “Hot Board” since it appears that the administrators have narrowed the field by so much. Two years ago, the final three choices for the Arkansas head coach vacancy came down Gus Malzahn, Mike Norvell and eventual hire Chad Morris, according to HawgSports’ Trey Biddy. None of them are in Kirk’s final three this time, however.

Regardless of who is selected, expect the final decision to be announced next week.

Current contract: Campbell is making $3.5 million, with a $6 million buyout on his contract.

Hog fans know him best from his time as head coach of Toledo, where he rolled into Little Rock in 2015 to knock the Hogs 16-12, an early sign that the Bret Bielema era was doomed. In all, his Toledo Rockets went 35-15.

Since 2016, Campbell has helmed Iowa State, where he’s gone:

7-4 so far this season (three of the four losses have been by 1-2 points to Iowa, Baylor and Oklahoma.)

Campbell is a top-notch coach in terms of teaching fundamentals. He’s also proven he can turn around programs with far less resources than Arkansas. Just shy of 40 years old, he is a hot commodity.

“You are teaching the world that in this sport of college football, toughness, discipline and details still matter,” Campbell said. “That is your platform. Your platform is that it is team above self. That is the platform that you’re using, and nobody wants to buy into that in our culture today. Our culture says that it is all about me. Our culture says, ‘Screw the process, I want instant gratification.’

There are accusations that he’s not a hot-shot recruiter, and he doesn’t have ties to the SEC or South in general.

One rebuttal to the first issue is that he could always hire hotshot assistants on his staff who can do the heavy lifting when it comes to courting bluechip prospects. Guys like Justin Stepp, Arkansas’ wide receivers coach, would be a good fit here.

He will attract talent so long as he proves he can coach it up, just as he’s done at Iowa State. “Winning eight games consistently at Iowa State is like winning ten elsewhere,” Arkansas Fight’s Luke Davis said. “You don’t just fall into those seasons in Ames. His players appear to be coached up, too. Former Razorback La’Michael Pettway has developed into a contributor; I don’t think that would’ve happened if he’d stayed in Fayetteville.”

It’s true he has no ties to Arkansas and the mid South in general. But the same went for Eric Musselman (outside of a short assistant coaching stint at LSU) and so far he’s doing much better in recruiting than Mike Anderson ever would have — despite Anderson’s deep ties to the area.

Plus, as Luke Davis points out, “Frank Broyles had no geographic ties to Arkansas before he came here. What you get when you hire a good coach is someone who will compensate for that. For Broyles, he did that by relying on assistants with deep ties, such as high school coaching legend Wilson Matthews.”

Arkansas Fight’s Tucker Partridge pointed to Dan Mullen as “an example of success despite few regional ties. Dan Mullen is an abrasive Yankee from the northeast, and is the best coach in Mississippi State history.”

Sure, he’s got Fayetteville ties, having lived there in the late 1970s while his father Monte Kiffin served as defensive coordinator under Lou Holtz.

But he’s also got a track record of leaving places in a cloud of controversy — whether that be at the Raiders, Tennessee Volunteers, USC Trojans or the Alabama Crimson Tide.

Despite his tendency to leave places in three or four years, he does win no matter where he goes on the college level. Would it be the worst thing in the world for Arkansas to have a coach swoop in, get back to regularly competing for bowl games in three seasons and then leave for greener pastures?

Arkansas is in such bad straits now that such a situation is preferable to striking out on trying to get someone who would be willing to stay for 7+ seasons.

“Coming from a football family and coaching under legends like [Nick] Saban and [Pete] Carroll have helped shape Kiffin’s coaching philosophy. Known to be more of a player’s coach, his presence on social media tells fans and recruits he’s still with the times.”

“Kiffin played quarterback for Fresno State, and he has always been more involved on the offensive side of the ball. He runs an up-tempo offense that has proven to be successful, for the most part. The spread offense allows the passing game to breathe by mixing in several running elements.”

The main red flag with Kiffin is that it’s hard to predict if he’ll truly commit himself to rebuilding Arkansas (in light of his departure of Tennessee after a season) and, if he does commit, if he’ll be able to recruit well enough to upgrade the talent to compete in SEC West giants.

“Lane Kiffin is like putting all your money on red during roulette,” Arkansas Fight’s Saul Malone wrote. “It could work, but also there’s a good chance it won’t. This is a hire that has a chance to fail and fail spectacularly. He could leave before really establishing himself and we’re back in the same boat except the boat’s on fire. It always seems like there’s uncertainty surrounding him. I don’t want to feel uneasy when I think about my head coach.”

Like Campbell, he’s won at two different programs with less resources than Arkansas. At 58 years old, Leach is nearly 19 years older than Campbell, though, so he’s got more experience.

His philosophy hinges on the Air Raid offense and finding the personnel (i.e. a great quarterback) to run it. But there are some red flags to deal with, too.

“What is his ceiling in the SEC West?,” Luke Davis asks. “Getting weird is good for a couple upsets a year, but would he ever get double-digit wins here? I don’t have high hopes. He’s also worn out his welcome in places, despite getting Texas Tech and Washington State to rarely-seen peaks. With the grind of this conference, that timeline crunches and he may not see success before it happens.”

Arkansas Fight’s Saul Malone adds: “The Air Raid™ is NOT hard to solve. If the rest of the conference get wise to it (which they probably will) I can see us being constantly stuck at 8-4/7-5…. He also has a bad habit of losing locker rooms and losing them aggressively.”

Here at BestOfArkansasSports.com, we’ve written deep dives about Mike Leach as the new Arkansas football coach a couple of times. Get more here: