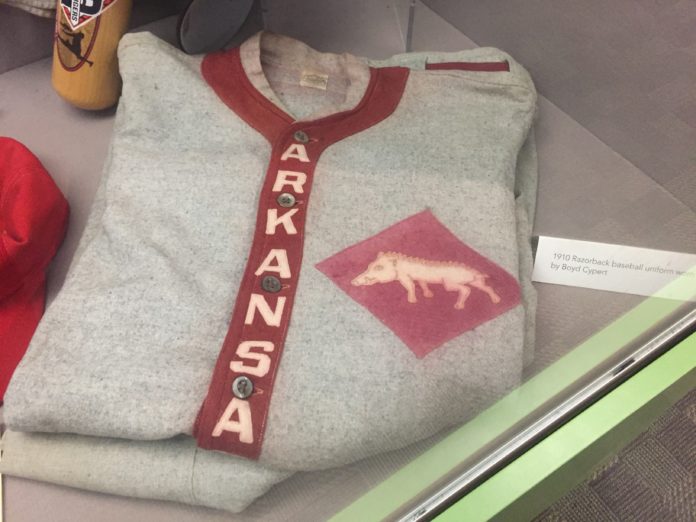 An Arkansas baseball uniform dating back to William Taft’s presidency

Today, precious, precious few Arkansas Razorback artifacts older than 100 years old are publicly viewable.  College sports simply weren’t that popular in Edwardian Era Arkansas. It didn’t catch on here like it did in more densely populated metro areas in the northeast, where folks had more expendable income and time to travel and see the likes of Yale and Harvard clash.

So, exactly how unpopular were UA sports?

“We had no bleachers. If you had 50 people to look at you, you felt fortunate,” Will F. Thomas said* of his time as Arkansas’ quarterback in 1901. “They’d pay 25 cents for a tag, which served as a ticket. If they could sell enough tags, they drove stakes and put up rope, and sent marshals out to keep the crowd back. Most of the students didn’t care much about football then, and people downtown didn’t show much in it, either.”

Given these dark ages, you can imagine my surprise when I recently came across a Razorback jersey which the Arkansas Sports Hall of Fame claims is 106 years old. The museum usually can’t verify the age of its donated artifacts, but no question this uniform looks legit old. 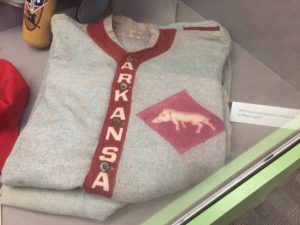 Its owner, Boyd Cypert, played third base while also quarterbacking the football squad. Cypert later graduated from Harvard Law School, played for a brief spell in Major League Baseball with the Cleveland Naps, practiced law in Little Rock, got caught up in some creationism/evolution controversy and served as the business manager for the UA’s athletic department.

Besides this Razorback jersey of outrageous yore, I found other awesome memorabilia on my recent visit to the  Arkansas Sports Hall of Fame, on the ground floor of Verizon Arena in North Little Rock. To wit:

A Veritable Shrine to Clyde Scott

All-everything back Clyde Scott might have been the most impressive dual-sport athlete to ever play for the UA football program. He set a UA record in the 100 meters (9.4 sec) and won a silver medal in the 110-yard hurdles in the 1948 Olympics — in the middle of his college career. 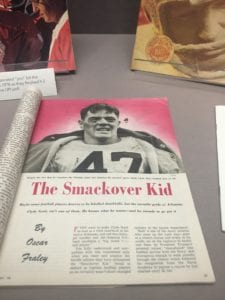 He did a lot of impressive things on the football field, too. Former UA athletic director John Barnhill said: “Clyde Scott meant more to the Arkansas program than any other athlete. His coming to Arkansas convinced other Arkansas boys they should stay home.”

His #12 is only one of two Razorback jersey numbers retired.

Apparently, the cleats below were worn by Scott during his four NFL seasons with Philadelphia and Detroit. 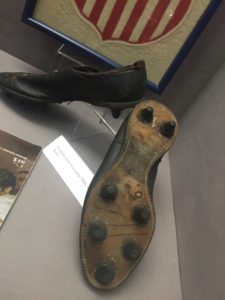 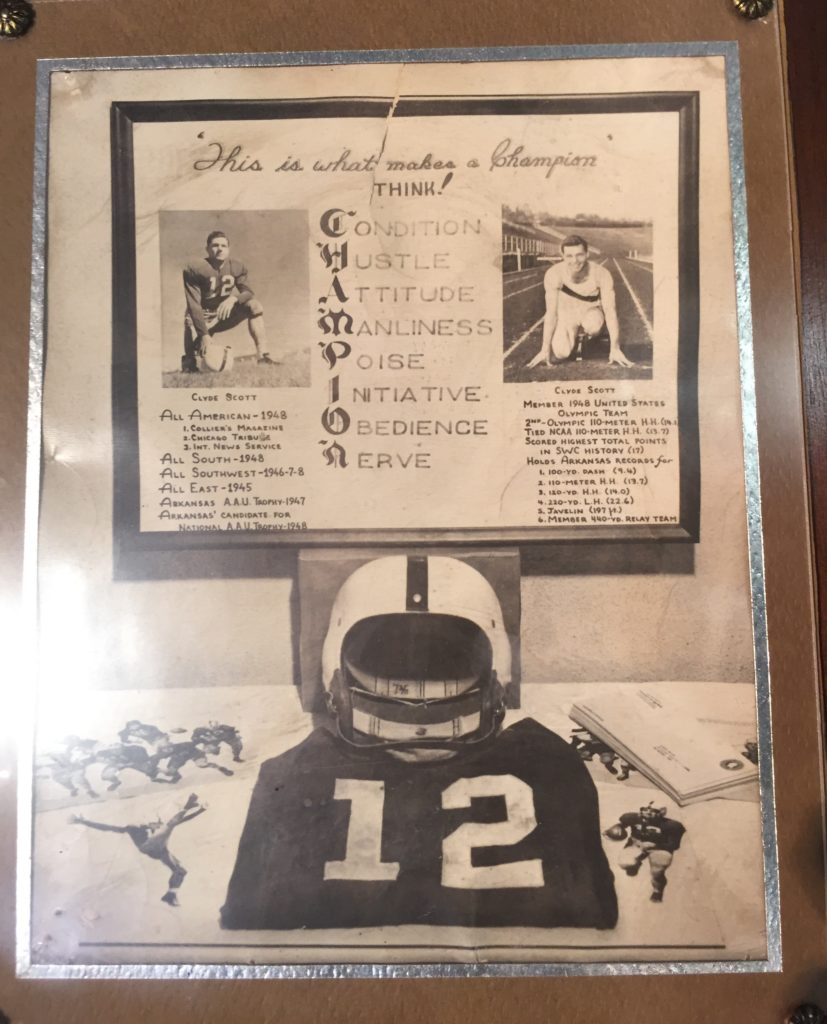 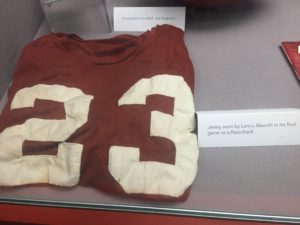 Lance Alworth ranks alongside Scott as one of the program’s most electric players pre integration. This future pro and college Hall of Famer, who become known as “Bambi,” led all colleges in punt return yardage in 1960 and 1961. Like Scott, he starred in track, running the 100 and 200-yard dashes (in 9.6 seconds and 21.2 seconds). He also long jumped.

This is the jersey from his last game — a 10-3 loss to undefeated national champion Alabama in the Sugar Bowl. 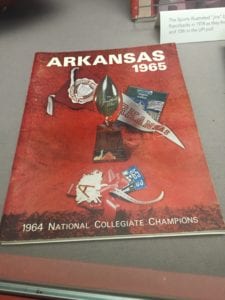 This is obviously one of a kind, as 1964 is the only season to which Arkansas football can lay claim to a national title. What are the chances Arkansas again wins the championship this year? Nowhere near as good as their chances of routing Louisiana Tech in the season opener, according to these college football lines.

Football used during the “Great Shootout” of 1969 Terri Johnson, director of Arkansas Sports Hall of Fame, told me this football was taken by an Arkansan ball boy right after the No. 2 Arkansas lost to No. 1 Texas in an epic showdown in Fayetteville. That teen and his children played with the ball throughout the 1970s and 1980s. He did, however, get Frank Broyles to sign it at a speech.

Later, the man tracked down Texas’ legendary head coach Darrell Royal and got him to sign it as well. Royal obliged and told him it’s the only thing he ever signed with a “Go Hogs Go” on it, Johnson recalled with a chuckle.

The man, whose name I didn’t request, recently donated the ball to the museum.

*This quote is attributed to an article in an unspecified newspaper in 1974. The quote is on an Arkansas Sports HOF banner.