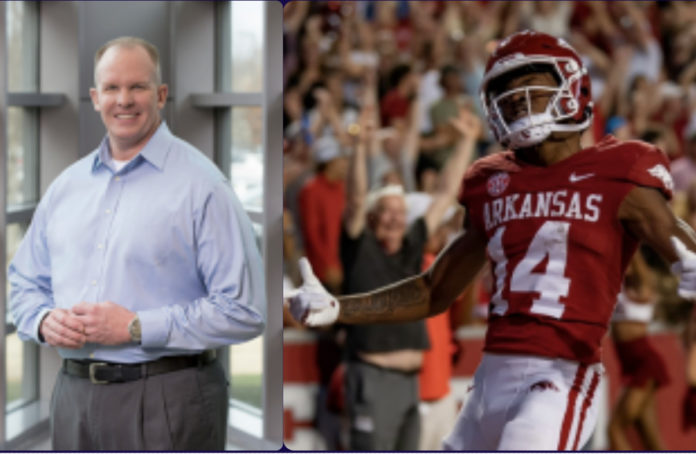 The plant-based, vegan meat company Beyond Meat, clearly, is looking for publicity. That’s why it hired Kim Kardashian as one of its spokespeople.

Still, what is going down today isn’t exactly the kind of sizzle the California-based company would want.

A Fayetteville police report involving one of Beyond Meat’s executives going Mike Tyson on some poor chap’s ear after the Arkansas-Missouri State game has gone viral, inspiring a thousand snarky comments involving red meat and the like.

Doug Ramsey, the COO of Beyond Meat and a former Tyson executive, had just watched the Hogs beat Petrino’s bunch and got into his vehicle to drive away from a parking garage when things started to get tense. “Ramsey had allegedly been in the traffic lane of the structure, attempting to leave, when a Subaru “inched his way” in front of Ramsey’s Bronco, making contact with the front passenger side tire,” KNWA reported. “Ramsey allegedly got out of his vehicle and ‘punched through the back windshield of the Subaru.'”

You just know this isn’t going to end up pretty.

Sure enough, “the owner of the Subaru then allegedly got out and stated Ramsey ‘pulled him in close and started punching his body.’ According to the report, Ramsey also ‘bit the owner’s nose, ripping the flesh on the tip of the nose.'”

Take real meat away from a man for long enough, and he’s gonna go get it somehow, some way, apparently.

The victim and the witness reported hearing Ramsey “threaten to kill” the owner of the Subaru. “Occupants of both vehicles got out and helped separate the parties,” as KNWA’s C.C. McCandless wrote.

Ramsey, described as a “servant leader” on the Tyson website as well as a “champion of team member safety,” was arrested on charges of terroristic threatening and third-degree battery. He was booked into the Washington County jail.

While we here at Best of Arkansas Sports don’t advocate nose cannibalism, we can understand one reason Ramsey might have been frustrated. It’s possible he was still steaming over how many yards Arkansas surrendered through the air against Missouri State. Giving up 357 yards per game, the Razorbacks now rank dead last in the FBS in passing yards defense.

That issue was one thing that Arkansas football Sam Pittman discussed in his presser today:

“I think the first thing is you have to make sure you have the right people in the right spots. You know what I’m talking about. Pre-snap. Not where they’re aligned, I’m saying do we have our best players on the field. I think you have to figure that out first. We’ve been adjusting. Part of it was because of a couple injuries, but part of it is we have some new guys back there as well. We’re going to experiment a little this week and see if we can’t get the right people in the right spots. I think [Myles] Slusher, he’s going to practice today. He’ll be back, and that should help us as well.”

“I think Malik Chavis is a guy we need on the field, and when he’s not playing corner, we need him at safety, and I’m not sure if we don’t need him at safety and just put Hud at corner. I think those are questions we have that we need to make… We’ve got to get our best five guys out there on the field at all times. Obviously, we know they get hurt, but those are things we’ve talked about as a staff. We’ve got to figure that out a bit better.”

“I will say this, we’re doing exactly what we think is best for us to win. There have been conversations about going back and running what did last year, double cloud about 90% of the snaps. And it worked some games, and it didn’t some games.”

“So I think we’ll get a mixture of that going forward. But we’ve got to fix that problem. Everybody in the building’s aware of it and how we do that is going to be a combination of who’s on the field and the opponent. Whether we feel like we can cover them man to man or not. And if we can’t cover them in zone coverage then we definitely have to put pressure on the quarterback, because that’s something that we’re good at.”

On Slusher’s return for Arkansas Football

“I think it’s huge. Any time you get somebody back, it’s not just the guy you’re getting back, but then you take somebody off the field as well, you know what I mean? And so you get better both ways. You get a better player on, and you get a worse player off the field. And I mean, and that’s not saying who we’re going to take off the field. I’m just saying then, bringing him back, because Slush can play corner. He can play nickel, he can play field safety, like boundary safety. And then with him, it allows us to have another opportunity to make sure we have our five best players on the field. So I think it’s really big.”

“Well, in my opinion, they played two totally different offenses. Miami tried to throw the ball quite a bit. Was having success running the football, but Miami had wideouts they wanted to get the ball to. App State was more of a ‘we’re coming at you, we’re going to run to the football,’ a little bit of play action, things of that nature — we’re going to try to run right at you, stuff like that.”

“So there was two different offenses going against their defense. Their defense is big and physical and can run. They’ve got a lot of strengths. One of them is their secondary. They’re really good in the back end. So I think they got better last week. You’d have to ask Jimbo, but I think they got a lot better in a week’s time. But there was two, in my opinion, totally different offenses ran against the defense.”