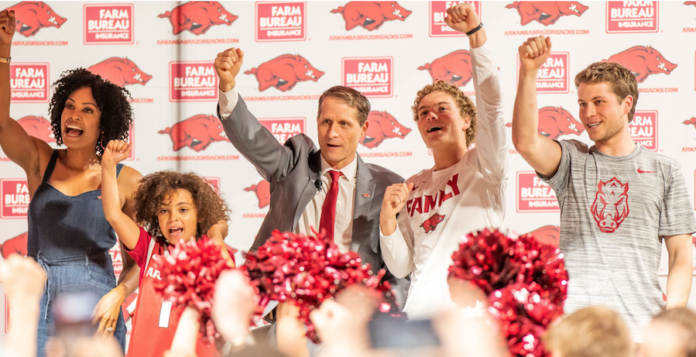 Hunter Yurachek’s first big fire and hire came last spring, when he relieved Mike Anderson of his duties and nabbed Eric Musselman from Nevada. So far, the move has been a resounding success. Thanks to a 10-1 start and a top 5 recruiting class, Musselman has sparked a level of excitement and optimism rarely seen since the last Hogs basketball golden era of the mid 1990s.

For a little while, similar optimism surrounded Mike Anderson’s arrival as head coach in 2011. Razorback Nation rejoiced  that the “Rollin’ with Nolan” days would soon return.  And boy……….they sure didn’t.

Over the next eight years, Hog fans found out Mike didn’t have the fire his boss of 17 years had. He couldn’t consistently get his players to get fired up and play at the level he needed.

Nolan Richardson sounded like Apollo Creed on the sidelines.  Anderson sounded like Mitch McConnell. In his 17 years as an Arkansas assistant to Richardson, Anderson had been the “good cop” while Nolan was the “bad cop.”  And that was okay.  It worked.

As head coach, Anderson remained the “good cop.” He didn’t have a “bad cop” on staff.

Most fans, including myself, liked Anderson because he seems like a thoroughly decent human being. Still, the word “mediocre” came to define his tenure. For fans that either directly remember the 1994 National Championship — or have seen a ridiculous amount of footage about it — his lack of consistency, piled on top of the Stan Heath and John Pelphrey eras, was too much.

The numbers don’t lie and the proof is in the pudding.  Despite putting Bobby Portis, Daryl Macon and Daniel Gafford into the NBA, Anderson took us to just 3 NCAA tournaments and two National Irrelevant Tournaments……..in 8 years.

When we did go to the NCAA tournament, we were a bubble team. Only once did Arkansas make it into the second round. Most of the fan base still remembers wondering which seed we would get in March Madness, not if we would get into the tournament.

Some of Anderson’s mediocrity stemmed from the way the game has changed overall. Nolan’s success came from running his up-tempo style in a more Moe Iba slow down era. Outside of Virginia, essentially everyone plays up-tempo now. In the last couple years at Arkansas, it seemed at times that the game had passed Anderson by (though, to his credit, he’s bounced back by taking St. John’s to the cusp of the Top 25).

Coach Muss appears to have been a GREAT hire.  He uses a similar defensive intensity to the best Richardson and Eddie Sutton teams, but with a level of sophistication that was missing from Anderson’s teams.  It’s early, but he has won 10 of his first 11 games and seven of those have been by double digits.

—Musselman = The Energizer Bunny (on steroids)

We’re getting good 3 pointers attempts from crisp ball movement while denying 3 pointers on the other end. Despite the fact that our tallest rotation player is 6’8” our defensive rebounding is the best it’s been since the 1986-87 season, according to hogstats.com.  Our intensity on defense leads to steals on one end and layups on the other.

The best modern teams attack defenses with three or four star players who are equally adept at scoring or passing the ball to open spot-up shooters. Like Isaiah Joe, Mason Jones and Jimmy Whitt do for these Hogs, they constantly probe defenses for weak spots and work advantageous one-on-one matchups.

Musselman’s “superstar coalition” approach is a far cry from when I played. Hell, back then, I told my teammates to get their shots in warm-ups because they weren’t getting them in the game. (I wouldn’t have done well under Musselman.)

So far, the team’s calling card is defense. These Hogs have held five opponents to less than 56 points. Three of those were held to under 50.

The Hogs will be even better in 2020-21 with the arrival of four blue-chip recruits, including this guy:

The firing of Mike Anderson needed to happen.  Basketball “success” to the Razorback Nation is not defined as simply “reaching” the NCAA tournament.  We want to “advance” in the tournament.

Anderson’s philosophy relies on having better talent and playing harder than the other team.

But news flash: The other team has scholarship players too.

Even if your players are playing hard, the other team often plays just as hard. So if they execute a better scheme, they win. It’s the difference in playing “hard” vs. playing “smart.”

Musselman doesn’t subscribe to the same stubborn we’re going to play the way we play” mentality that Anderson does. He adapts his schemes to the players he has, and more importantly to his opponents. That’s evident from the fact that these Hogs talk about practicing against “scout” teams meant to emulate the next opponent — a level of preparation that evidently didn’t exist under Anderson.

Musselman does this to exploit his opponents’ weaknesses and works to shut down their strengths.  It remains to be seen if his undersized squad can keep doing this against bigger SEC teams, but help is on the way. Once more size arrives next season in the form of transfers 7’3″ Connor Vanover and 6’9″ Abayomi Iyiola — as well as c/o 2020 recruit 6’10” Jaylin Williams — it seems clear Musselman should spark a new golden era at Arkansas.

For the first part of this three-part series, see below: