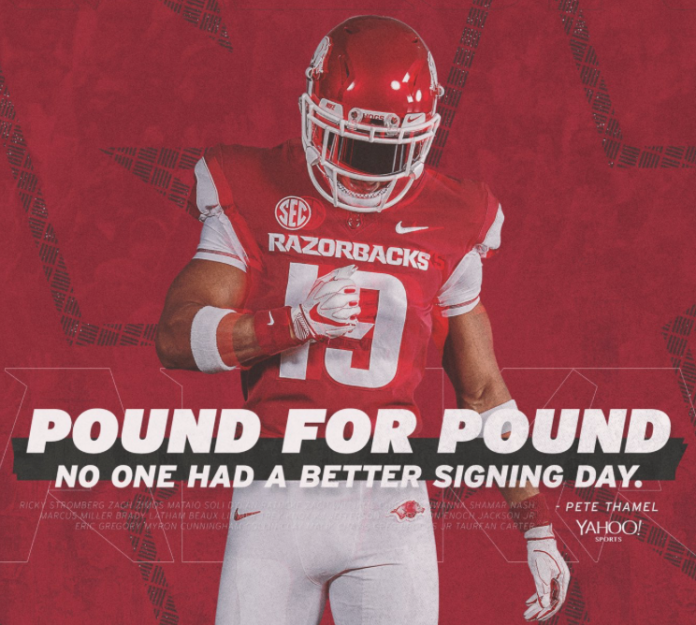 After three days of the Early Signing Period, the final numbers are in: Arkansas signed 21 players during the three-day event. With a last day signing by cornerback Devin Bush, the Razorbacks inked 13 blue chip recruits — far and away the most in recent program history. Coincidentally, Arkansas’ class so far comes in at No. 13 nationally (according to Rivals).

What do I mean by “blue chip recruits”?

I mean recruits ranked as four or five stars, the two highest designations on most recruiting services. The major recruiting service Rivals has archived each Arkansas recruiting class dating back to 2002. The second-highest is the class of 2009 which included the likes of Knile Davis, Darius Winston and Ronnie Wingo, Jr. That was part of the foundation of the Bobby Petrino-coached teams which would eventually lead Arkansas to a No. 3 national ranking and Sugar Bowl berth.

Those teams also got a big-time QB transfer in Ryan Mallett. It’s yet to be seen if Chad Morris can get such a transfer, or JUCO quarterback, though there are plenty of possibilities still out there in the wake of Kelly Bryant’s decision. A few days ago, Morris said: “Absolutely we’re still exploring options to bring an older quarterback in.”

Talent matters, and the teams which load up on it will win. That was seen in the Frank Broyles era, in which he occasionally recruited classes that would have ranked in the Top 15 nationally had recruiting services existed then. We saw it in the Bobby Petrino era, and we’ll see it again in the Chad Morris era so long as he keeps the same drive he’s shown so far.

Of course, not all his blue chip players will pan out. Just take a scan down the following names and you’ll see a few “can’t-miss” guys who whiffed. You’ll also see quite a few future All-SEC players. And the chances of a four or five-star player turning into such a player are much higher than with a three-star or below. That’s a basic rule which fuels the success of the “blue blood” programs year after year.

(NB: Unless otherwise noted, all players below were ranked as four stars)

A Razorbacks class of 2019 dubbed by Pete Thamel, national college football writer, as “pound for pound” as good as any program’s will get even better. Three blue chip recruits — four-star Adonis Otey, Treylon Burks and Hudson Henry — have committed and will sign in February.

What do you predict this class will end up accomplishing in the next three to five years? A 10-win season? A win or two against Nick Saban’s Alabama? An SEC West championship (which essentially guarantees a Final Four spot)?