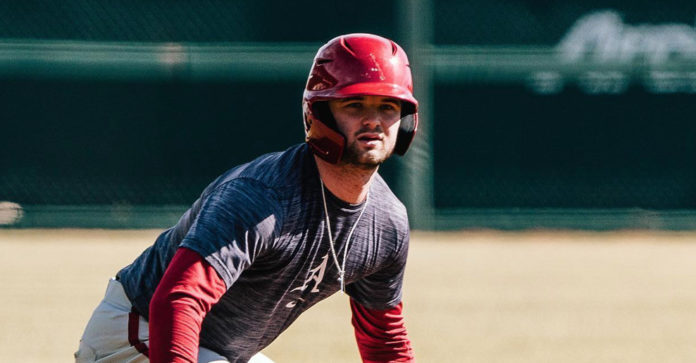 The Arkansas baseball program has produced some standout freshman stars in the Dave Van Horn era, but few have received the kind of preseason love that Peyton Stovall is getting this year.

Stovall, Prep Baseball Report‘s top prospect in Louisiana high school baseball last year after hitting .489 with 12 home runs and 39 RBI, reportedly turned down $2 million last summer to join the Razorbacks. The 5’11”, 190 pounder is going into 2022 season as the Razorbacks’ starting first baseman and in the first two Arkansas baseball preseason scrimmages he hit 2-7 with a double, a walk and two runs.

A few months ago, during fall intrasquad scrimmages, Stovall went 5 for 12 at the plate with three runs and five RBIs — primarily in the leadoff spot.

“He’s as advertised for sure, he can play,” Arkansas catcher Michael Turner said in the fall. “He’s fun to watch, especially with a young guy like that you don’t see it very often, so to see somebody come in and like that do well right away is respectable.”

Stovall comes in with so much promise that D1baseball has lauded him as the preseason SEC Freshman of the Year. Perhaps even more impressively, today he was announced as one of three preseason Arkansas baseball All-Americans by Baseball America.

The scouting departments of 14 MLB organizations voted on the team. Baseball America annually polls major league teams to vote for its preseason All-America team, asking that they make their selections based on performance, talent and professional potential, according to the Razorbacks Communications press release.

It’s a testament to Stovall that he got this after playing shortstop in high school isn’t even projected to stay at first base beyond this year. In the future, he’s expected to go to second base, which is currently manned by junior Robert Moore.

“He played second base his sophomore and junior year and he’s going to be really good at second in the future,” Van Horn said. “But obviously that’s Robert Moore’s spot right now.”

Moore slashed .283/.384/.558 with a team-leading 16 home runs and 53 RBI in 2021, his first full season with the Razorbacks. The Leawood, Kan., native established himself as one of college baseball’s premier middle infielders, earning All-SEC, Newcomer All-SEC and SEC All-Defensive honors — as well as one of the most badass quietings of an opposing fanbase on the year.

Wiggins made 17 appearances, including four starts, on the mound for Arkansas as a true freshman in 2021. The right-hander from Roland, Okla., who is ranked by Baseball America as one of the top college prospects for the 2023 MLB Draft, posted a 3-1 record with a 5.09 ERA and four saves, striking out 28 in 23.0 innings pitched.

He’ll be more important than ever with the loss of expected ace pitcher Peyton Pallette.